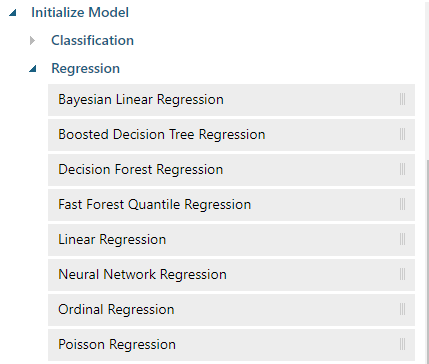 Let us look at what are the key feature of these techniques of regression in Azure Machine Learning.

Let us look at the usage of different techniques of regression in azure machine learning in detail.

In the AdventureWorks example, let us say we want to predict the yearly income of customers using other features of customers such as occupation, age, number of children, education, etc.

Let us create an experiment that we have been doing in previous articles as shown in the below screenshot. 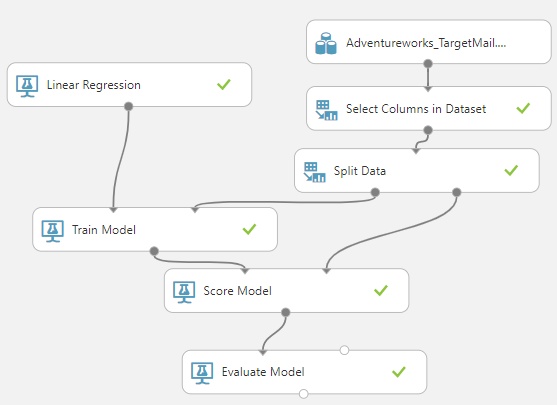 Let us rush through the settings in the above experiment as a recap. We have included the AdventureWorks data set that was uploaded before. Since there are a lot of attributes, we have selected only a few columns that will make an impact to decide the yearly income. Those attributes are Marital Status, Gender, Yearly Income, Total Children, Number of Children At Home, Education, Occupation, House Owner, Number of Cars Owned, Age. After the columns are selected, data is split to train and test. In the Train Model, Yearly Income is selected as the predicted column.

We have used linear regression and the following are the configurations of the Linear Regression. 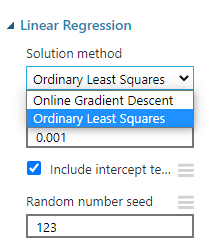 As shown in the above screen, there are two types of methods, Ordinary Least Squares, and Online Gradient Descent methods.

The following are the two parameters for both methods that can be observed from the Train Model control.

You will see that model parameters are different depending on the method that you used in the Liner regression control.

Let us predict Age of the customer using other parameters. As you know, age cannot be negative and with decimal points. To achieve this, we need to make a few modifications to the above experiment, we need to replace the prediction model with the Poisson regression and change the train model variable to the Age. 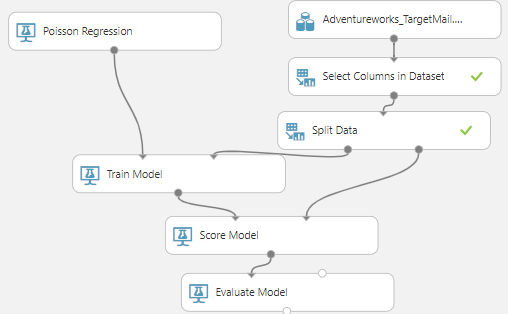 The following are the evaluation comparison of Poisson Regression with the Linear regression model.

The artificial neural network (ANN) is used in many places in machine learning. In ANN, there are input variables, and there will be a hidden layer from which the output is generated. ANN is mostly used to more complex tasks such as image recognition, character recognition, but it can be used to solve the regression in Azure Machine learning. We will be discussing neural networks in detail in a coming article. In the case of regression, it is just a matter of using the Neural Network regression control and use as a linear regression control.

You will see that Decision Forest is much better than the linear regression which is very common even with many datasets. You have the option of looking at the model from the Train Model as shown in the below screenshot. 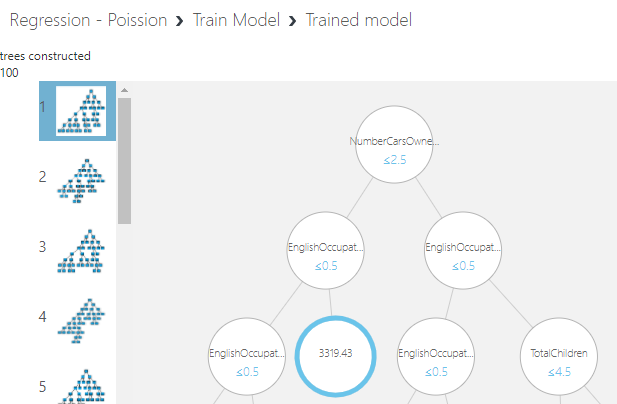 As configured in the tress model 100 trees are built. You can limit the number of trees to attain higher accuracy. According to this tree, the number of cars is the most important parameter to define the yearly income and next is the Occupation and so on.

Similarly, we can perform regression from Decision Forest Regression and the following are the results for the evaluation parameters.

When predicting using the web service that was discussed in the prediction article, it will predict not only the mean but also the other quantities as shown.

In this article, we looked at different algorithms for Regression in Azure Machine Learning. In azure machine learning, there are rich controls to model regression. We identified that decision tree related regression models are much accurate than other algorithms.