We will use data from the previous article for demonstration of SQL Server Lag function as well:

We have the following data in the Employee table:

Execute the following query to use the Lag function on the JoiningDate column with offset one. We did not specify any default value in this query.

Execute the following query (we require to run the complete query along with defining a variable, its value):

In the output, we can note the following:

In the output, we can see a default value instead of NULL in the first row:

As discussed earlier, we use the PARTITION BY clause to create a logical subset of data. Let’s use this PARTITION function on the ProductSales table. You can refer to the SQL Server Lead function to create this table: 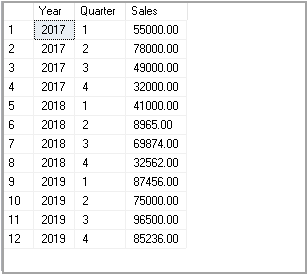 In the following query, we use SQL Server Lag function and view the output:

In the output, the lag function considers all rows as a single data set and applies Lag function: 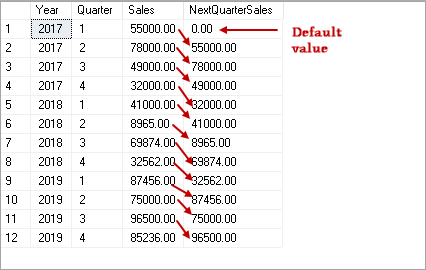 In the following screenshot, we can see three partitions of data for 2017,2018 and 2019 year. The Lag function individually works on each partition and calculates the required data: 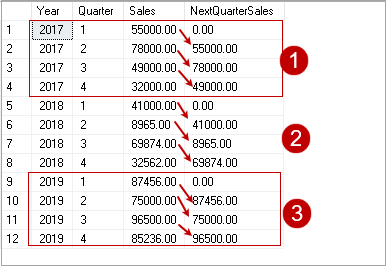 In this article, we learned the SQL Lag function and its usage to retrieve a value from previous rows. Here is the quick summary of the lag function: