As we know, in machine learning, our target is to predict using the existing variables. However, there are instances where there are many variables. For example, in the sample dataset that we used in the previous articles, to decide that you are a bike buyer, there can be many variables such as Age, Region, occupation, Profession, Number of Children, Commute distance, number of cars, yearly income, gender, marital status, etc. Out of these variables, what are the important variables? By answering this question, you will find that what the important variable that you want to. This technique will allow you to evade collecting unnecessary or unimportant variables. Selecting the relevant variables is called Feature Selection.

When there are too many variables, your model will have high accuracy on your train data set. However, when it comes to prediction, it will tend to produce invalid results. Typically over-fitting can be avoided by reducing the model to only important variables. So, feature selection in Azure Machine Learning can be used as a solution for over-fitting. 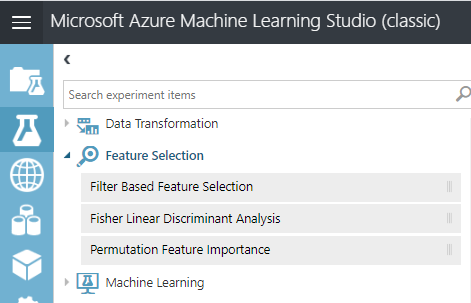 Let us see how we can use feature selection and let us create an experiment with the AdventureWorks dataset, which we have been using before. The following screenshot shows the dataset for the Adventureworks sample data set.

Let us drag and drop the Filter Based Feature Selection control to the Azure Machine Learning Experiment canvas and connect the data flow from the data set, as shown in the below screenshot. 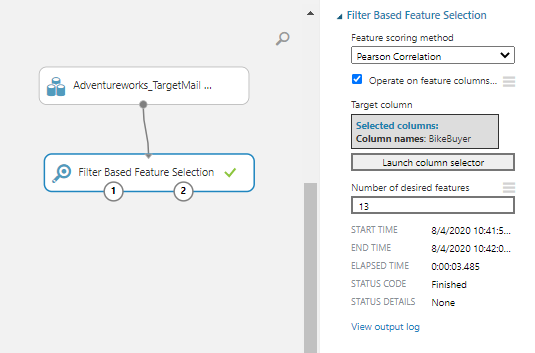 Since we are looking at the Bike Buyer variable as the target variable, we need to set the Bike Buyer Target column option in the Feature-Based Filter Selection control.

After the experiment was executed, verify statistics from the right-hand side second point. That is also named as features.

This will include the score for each feature. A higher score indicates that it is a more important variable. For example, according to the Pearson correlation, the Number of Cars Owned, Total Children, are the most important variables.

The following is the Pearson Correlation score for each variable.

Let us look at this from a graph. 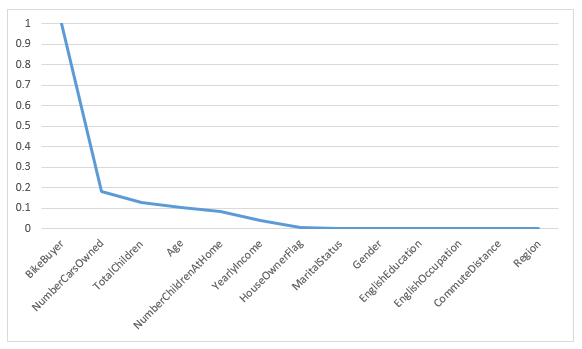 By looking at the above graph BikeBuyer, NumberCarsOwned, TotalChildren, Age, NumberChildrenatHome, YearlyIncode are the prominent variables to decide the bike buyer. This means we have five important variables to select the BikeBuyer. Then let us change the Number of desired features to 5 and re-run the experiment.

Now in the first node, you will see only five variables and Bike Buyer variable, as shown in the below screenshot. 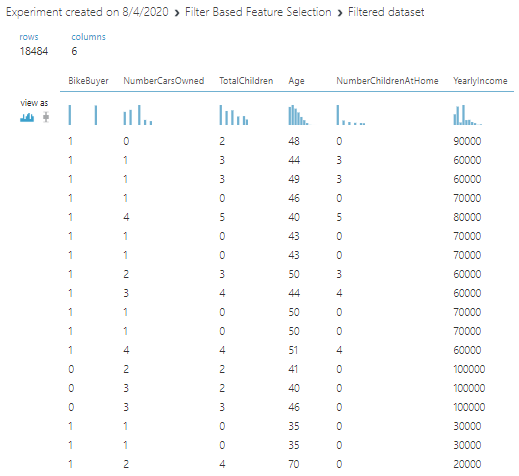 Now you will be using these variables for the model building and evaluation rather than using all the thirteen variables.

Next, we will create a prediction model, as we did in the last article, which is shown in the below screenshot. 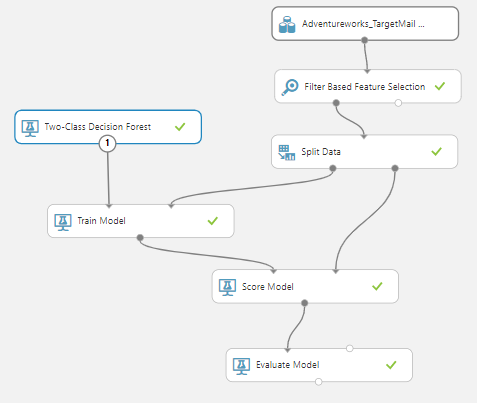 From the above table, it is clear that when you reduce the number of parameters, accuracy, and other relevant evaluation parameters will be reduced. However, we need to select the optimum number of variables using Feature Selection in Azure Machine Learning. 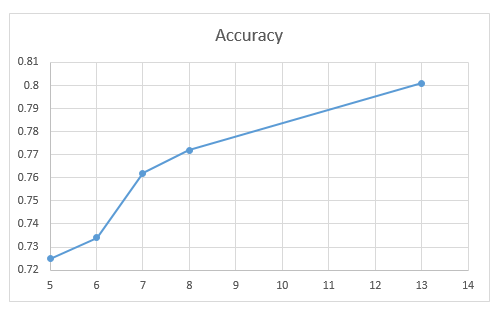 Let us look at how Permutation Feature Importance is used in the following screenshot. 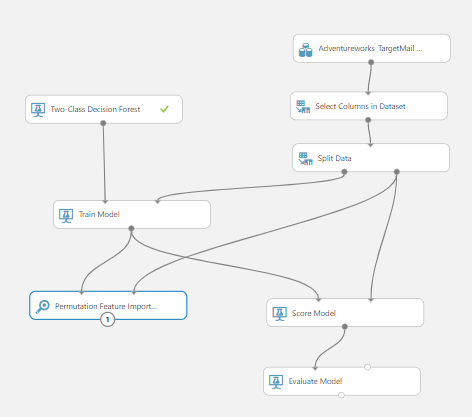 In the permutation Feature Importance control, there are two configurations. One of them is the random seed that will define the randomness of the control. For the evaluation, there are few options for classification and regression. For the Classification, Accuracy, Precision, Recall, and Average Log loss and for the Regression technique, Mean Absolute error, Root means squared error, Relative Absolute error Relative squared error, and coefficient of determination.

Let us view the results from the permutation Feature Importance control that is shown in the below screenshot: 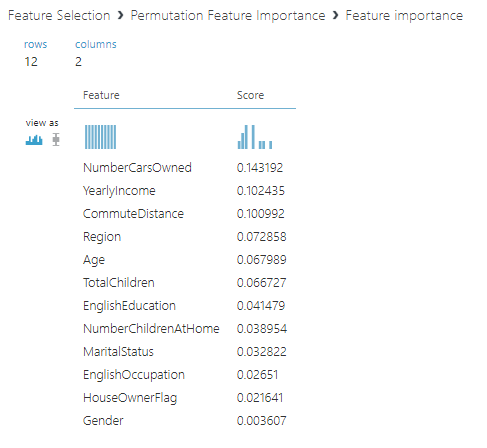 We discussed the techniques for Feature Selection in the Azure machine learning platform from which we can find the important variables to define the machine learning model. Further, feature selection can be used to overcome the over-fitting issue. In this article, we discussed two techniques of Feature Selection in Azure Machine Learning, which are Filter Based and permutation Feature Importance.

In the Filter-Based, we can directly provide the number of columns that have to be selected after inspecting different score values. There are several ways for determining the score, of which you need to select the most optimum scoring technique.

In permutation Feature Importance, you need to use the Select Column control to filter the needed columns.

In my next article, I will be discussing the Principal Component Analysis in detail.