In this article, we will learn different methods that are used to update the data in a table with the data of other tables. The UPDATE from SELECT query structure is the main technique for performing these updates.

An UPDATE query is used to change an existing row or rows in the database. UPDATE queries can change all tables’ rows, or we can limit the update statement affects for certain rows with the help of the WHERE clause. Mostly, we use constant values to change the data, such as the following structures.

The full update statement is used to change the whole table data with the same value.

The conditional update statement is used to change the data that satisfies the WHERE condition.

However, for different scenarios, this constant value usage type cannot be enough for us, and we need to use other tables’ data in order to update our table. This type of update statement is a bit complicated than the usual structures. In the following sections, we will learn how to write this type of update query with different methods, but at first, we have to prepare our sample data. So let’s do this.

In this method, the table to be updated will be joined with the reference (secondary) table that contains new row values. So that, we can access the matched data of the reference table based on the specified join type. Lastly, the columns to be updated can be matched with referenced columns and the update process changes these column values.

After the execution of the update from a select query the output of the Persons table will be as shown below;

Let’s try to understand the above code:

Indexes are very helpful database objects to improve query performance in SQL Server. Particularly, if we are working on the performance of the update query, we should take into account of this probability. The following execution plan illustrates an execution plan of the previous query. The only difference is that this query updated the 3.000.000 rows of the Persons table. This query was completed within 68 seconds.

We added a non-clustered index on Persons table before to update and the added index involves the PersonCityName and PersonPostCode columns as the index key. 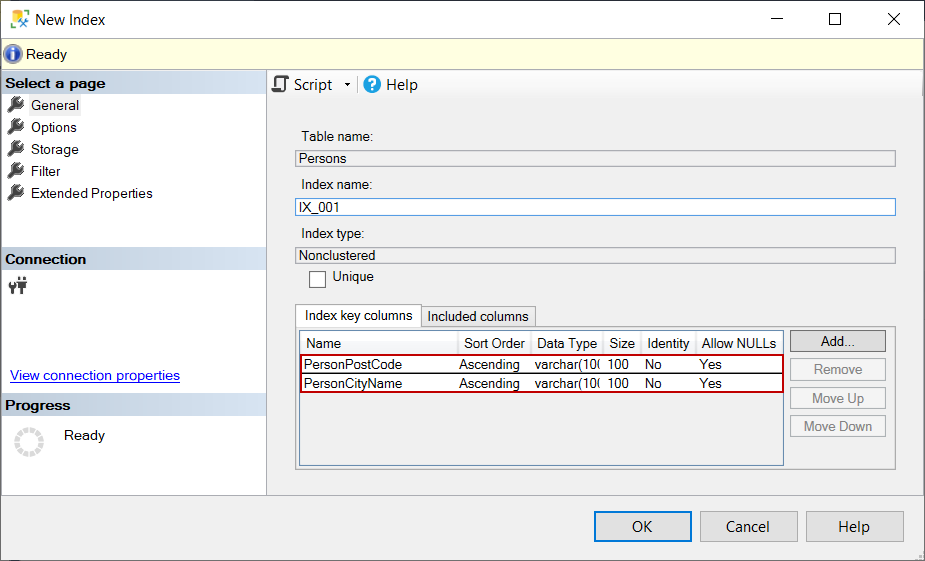 The following execution plan is demonstrating an execution plan of the same query, but this query was completed within 130 seconds because of the added index, unlike the first one.

The Index Update and Sort operators consume 74% cost of the execution plan. We have seen this obvious performance difference between the same query because of index usage on the updated columns. As a result, if the updated columns are being used by the indexes, like this, for example, the query performance might be affected negatively. In particular, we should consider this problem if we will update a large number of rows. To overcome this issue, we can disable or remove the index before executing the update query.

On the other hand, a warning sign is seen on the Sort operator, and it indicates something does not go well for this operator. When we hover the mouse over this operator, we can see the warning details. 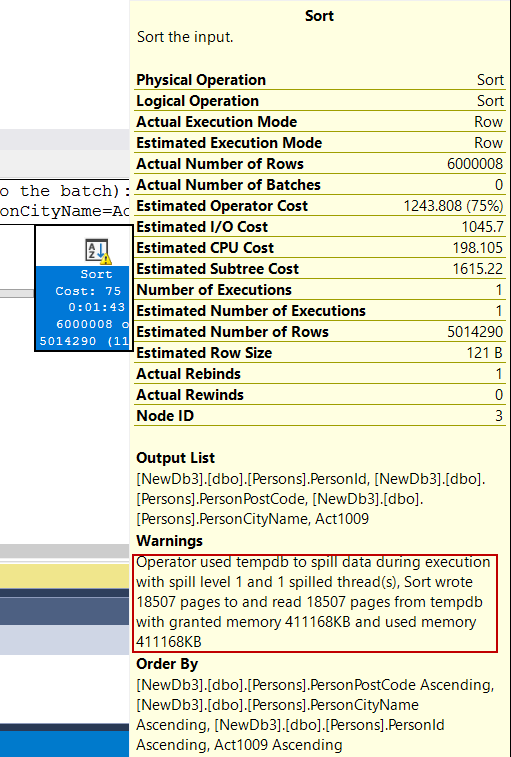 UPDATE from SELECT: The MERGE statement

Now, if we go back to our position, the MERGE statement can be used as an alternative method for updating data in a table with those in another table. In this method, the reference table can be thought of as a source table and the target table will be the table to be updated. The following query can be an example of this usage method.

Now let’s tackle the previous update from a select query line by line.

We have typed the Persons table after the MERGE statement because it is our target table, which we want to update, and we gave Per alias to it in order to use the rest of the query.

After the USING statement, we have specified the source table.

With the help of this syntax, the join condition is defined between the target and source table.

A subquery is an interior query that can be used inside of the DML (SELECT, INSERT, UPDATE and DELETE) statements. The major characteristic of the subquery is, they can only be executed with the external query.

The subquery method is the very basic and easy method to update existing data from other tables’ data. The noticeable difference in this method is, it might be a convenient way to update one column for the tables that have a small number of the rows. Now we will execute the following query and then will analyze it.

After the execution of the update from a select statement the output of the table will be as below;

In this article, we learned to update the data in a table with the data where they are contained in other tables. The query structure, “UPDATE from SELECT” can be used to perform this type of data update scenario. Also, we can use alternative MERGE statements and subquery methods.