We perform calculations on data using various aggregated functions such as Max, Min, and AVG. We get a single output row using these functions. SQL Sever provides SQL RANK functions to specify rank for individual fields as per the categorizations. It returns an aggregated value for each participating row. SQL RANK functions also knows as Window Functions.

We have the following rank functions.

Before we explore these SQL RANK functions, let’s prepare sample data. In this sample data, we have exam results for three students in Maths, Science and English subjects.

We have the following sample data in the ExamResult table. 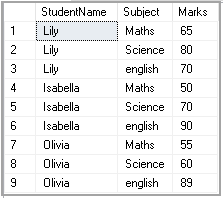 Let’s use each SQL Rank Functions in upcoming examples.

We use ROW_Number() SQL RANK function to get a unique sequential number for each row in the specified data. It gives the rank one for the first row and then increments the value by one for each row. We get different ranks for the row having similar values as well.

Execute the following query to get a rank for students as per their marks. 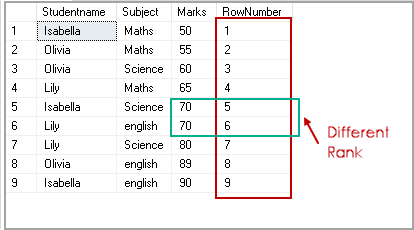 By default, it sorts the data in ascending order and starts assigning ranks for each row. In the above screenshot, we get ROW number 1 for marks 50.

We can specify descending order with Order By clause, and it changes the RANK accordingly. 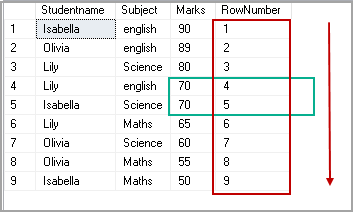 We use RANK() SQL Rank function to specify rank for each row in the result set. We have student results for three subjects. We want to rank the result of students as per their marks in the subjects. For example, in the following screenshot, student Isabella got the highest marks in English subject and lowest marks in Maths subject. As per the marks, Isabella gets the first rank in English and 3rd place in Maths subject. 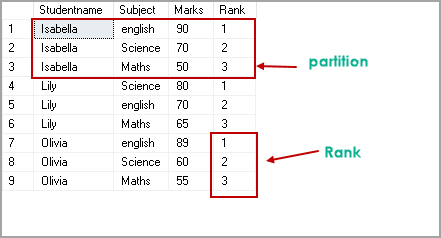 Let’s execute the following query of SQL Rank function and look at the result set. In this query, we did not specify SQL PARTITION By clause to divide the data into a smaller subset. We use SQL Rank function with over clause on Marks clause ( in descending order) to get ranks for respective rows.

If two students get the same marks (in our example, ROW numbers 4 and 5), their ranks are also the same.

We use DENSE_RANK() function to specify a unique rank number within the partition as per the specified column value. It is similar to the Rank function with a small difference.

In the SQL RANK function DENSE_RANK(), if we have duplicate values, SQL assigns different ranks to those rows as well. Ideally, we should get the same rank for duplicate or similar values.

Let’s execute the following query with the DENSE_RANK() function.

In the output, you can see we have the same rank for both Lily and Isabella who scored 70 marks.

Let’s use DENSE_RANK function in combination with the SQL PARTITION BY clause.

We do not have two students with similar marks; therefore result set similar to RANK Function in this case.

Let’s update the student mark with the following query and rerun the query.

We can see that in the student group, Isabella got similar marks in Maths and Science subjects. Rank is also the same for both subjects in this case.

Let’s see the difference between RANK() and DENSE_RANK() SQL Rank function with the following query.

In the output, you can see a gap in the rank function output within a partition. We do not have any gap in the DENSE_RANK function.

In the following screenshot, you can see that Isabella has similar numbers in the two subjects. A rank function assigns rank 1 for similar values however, internally ignores rank two, and the next row gets rank three.

In the Dense_Rank function, it maintains the rank and does not give any gap for the values.

Similarly, NTILE(3) divides the number of rows of three groups having three records in each group.

We can use SQL PARTITION BY clause to have more than one partition. In the following query, each partition on subjects is divided into two groups. 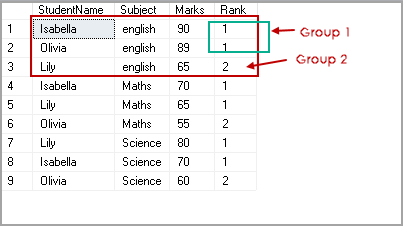 We can use SQL RANK function to fetch specific rows from the data. Suppose we want to get the data of the students from ranks 1 to 3. In the following query, we use common table expressions(CTE) to get data using ROW_NUMBER() function and later filtered the result from CTE to satisfy our condition.

We can use the OFFSET FETCH command starting from SQL Server 2012 to fetch a specific number of records.

In this article, we explored SQL RANK functions and difference between these functions. It is helpful for sql developers to be familiar with these functions to explore and manage their data well. If you have any comments or questions, feel free to leave them in the comments below.