Data Reduction mechanism can be used to reduce the representation of the large dimensional data. By using a data reduction technique, you can reduce the dimensionality that will improve the manageability and visibility of data. Further, you can achieve similar accuracies.

There are different data reduction techniques as shown in the following screenshot.

What is Principal Component Analysis

Let us see how we can use Principal Component Analysis in the Azure Machine Learning environment.

As we have been doing for the previous examples, let us drag the Adventureworks dataset to a newly created experiment in the Azure Machine Learning. The following is the sample set of data.

You will see there are 28 columns and some of them are not going to make any contribution to the decision of buying bikes. For example, Name, Address, or email addresses are highly unlikely to contribute to the decision of bike buying. Therefore, we need to eliminate these columns from the data flow. We will be using Select Columns in Dataset control. Please note that we discussed this control during the Data Cleaning article.

As shown in the above screenshot, attributes such as Marital Status, Gender, Yearly Income, Total Children, Number of Children at Home, Education, Occupation, House Owner Flag, Number of Cars owned, Commuted Distance, Region, and Age are selected independent variables along with the Dependent variable Bike Buyer.

Now let us include Principal Component Analysis in Azure Machine Learning in order to reduce the dimensionality. 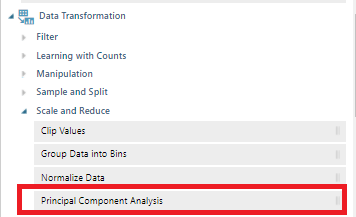 Please note that we will be using Normalize Data control later in the article.

Let us configure the Principal Component Analysis in Azure Machine Learning as shown in the below screenshot.

We have configured the number of dimensions or components to 4. This means that all the selected variables will be converted into four dimensions.

Next is to select attributes that should be converted to four components as we configured before.

In the above, we have selected all the independent variables as shown in the above screenshot. After executing the experiment, you will see the following output in the first output of the Principal Component Analysis control. 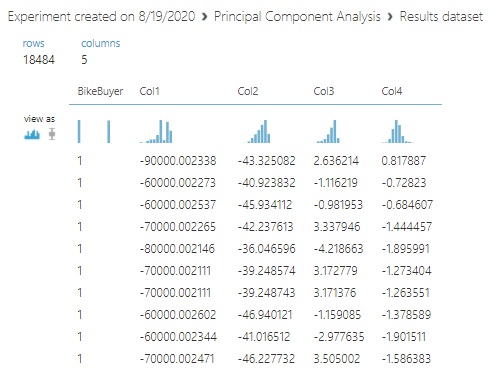 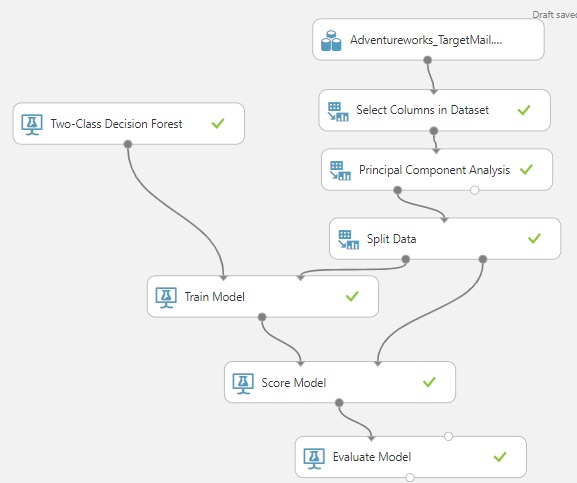 First, let us split the data from Split Data control where 70% of data for training and the rest of 30% is to test the model. Then we will use the Train Model where the model is trained from the Two-Class Decision Forrest algorithm. Then the score model control is included to compare the test and finally, The Evaluate Model is added to evaluate the created prediction model.

You will observe that the principal component analysis in Azure Machine Learning is better than the Feature selection but not accurate as all the features which are obvious.

You will observe that Col1 and Col2 have a different range of values from Col3 and Col below screenshot. 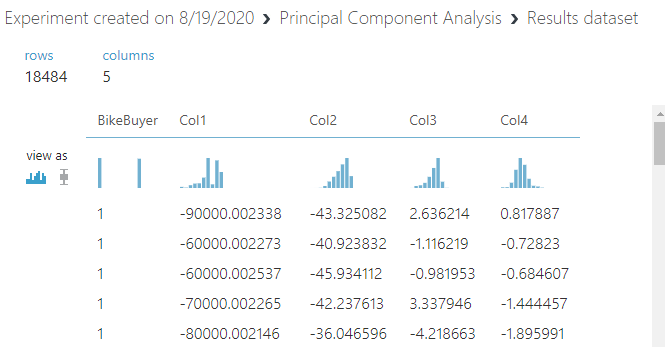 This type of data set we can normalize the dataset using the Normalize Data control as shown in the below screenshot.

In this, we have used the Zscore normalization method and we have selected Col1 and Col2 columns for transform. The following is the screenshot for the output after the Transformation. 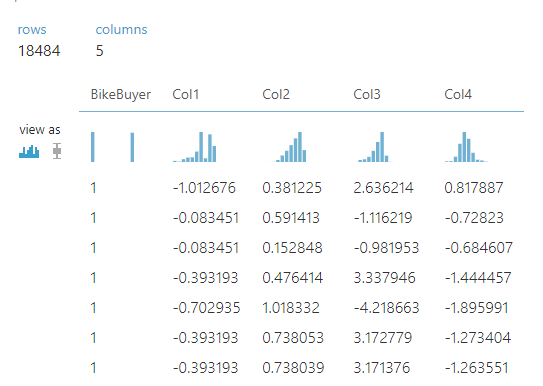 Now you will see that all columns are normalized.

When the evaluation is done, like what we did last time, you will see that there is no difference between normalization and without normalization.

Now let us see how we can combine Feature selection that was discussed in the last article with the Principal Component Analysis in Azure Machine Learning.

In the previous article, using different scoring techniques, we identified that we can choose the important variables rather than selecting all the variables. For example, using Pearson correlation, we identified that Number of Cars Owned, Total Children, Age, Number of Children at Home, and Yearly Income are the most important variables that will decide on the decision of bike buying. In that technique, we ignored all the other variables.

Keeping that in the count, let us select the only less important variables at the principal component analysis and convert this to three components.

In that context, we have configured Principal Component Analysis in Azure Machine Learning as shown in the below screenshot.

The Following screenshot shows the output of the Principal Component analysis.

Now you have converted the entire data set, the most important variables and three additional variables. Since all values appear to be in the same range, there is no need for the normalization component as before.

In the above table you will that, accuracy and other parameters are close to the Normal prediction to the feature selection with Principal component Analysis in Azure Machine Learning. Further, this shows that the combination of Feature Selection and Principal Component Analysis have better accuracy than they are considered separately.

Principal Component Analysis in Azure Machine Learning is used to reduce the dimensionality of a dataset which is a major data reduction technique. This technique can be implemented for a dataset with a large number of dimensions such as surveys etc. Principal Components Analysis can be used along with the Feature Selection to achieve better results.