Using the MERGE statement in SQL gives you better flexibility in customizing your complex SQL scripts and also enhances the readability of your scripts. The MERGE statement basically modifies an existing table based on the result of comparison between the key fields with another table in the context. 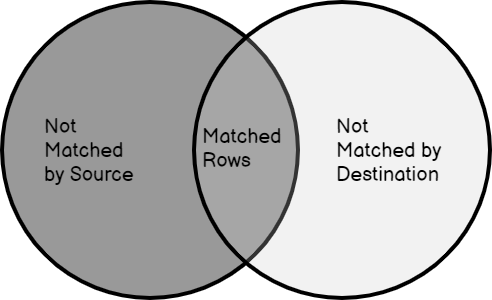 Applications of the SQL MERGE statement

The SQL MERGE statement was introduced in the SQL Server 2008 edition which allowed great flexibility to the database programmers to simplify their messy code around the INSERT, UPDATE and DELETE statements while applying the logic to implement SCD in ETL.

Optimizing the performance of the SQL MERGE statement

There are a few aspects using which you can optimize the performance of your MERGE statements. Having said that, it means now you can write all your DML statements (INSERT, UPDATE, and DELETE) combined in a single statement. From a data processing perspective, this is quite helpful as it reduces the I/O operations from the disk for each of the three statements individually and now data is being read from the source only once.

Also, the performance of the MERGE statement greatly depends on the proper indexes being used to match both the source and the target tables. Apart from indexes, it is also essential that the join conditions are optimized as well. We should also try to filter the source table so that only necessary records are being fetched by the statement to do the necessary operations.

Hands-on with the MERGE statement

Now that we have gathered enough information regarding how the MERGE statement works, lets us go ahead and try to implement the same practically. For the purpose of this tutorial, I am going to create a simple table and insert a few records in it. You can use the following SQL script to create the database and tables on your machine. 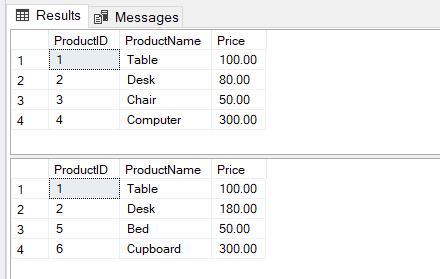 Now that the database is ready, the next step I am going to perform is to apply the MERGE statement and try to get both the tables to synchronize with each other. The first operation that we are trying to see is how to manage the INSERTs. You can copy and paste the below SQL code to merge the new data from the source to the target table.

Figure 3 – MERGE operation performed on the source and target tables

As you can see, the two records with ProductID 3 and 4, which were not present in the target table are now inserted. This operation is done by matching the source and the target tables based on the ProductID field.

Now that we have learned how to insert records using the SQL MERGE statement, let us learn how to update the values in the same statement. In order to update the values, the ProductID field must have a common value in both the source and the target tables. Only then the database engine will be able to match the records and the update operation can be performed on the columns that have been specified.

As you can see in the figure above, the initial value for the product “Desk” in the target table was mentioned as “180.00”. When the SQL MERGE statement was executed, it updated the values for all the matched records that had an entry in the source. Also, if you notice the SQL script now, you can see that I have just added the update script after the insert statement, and that means all the inserts and the updates are being executed in the same script itself.

Let us now see how to delete or remove records from the target table in the same script itself. 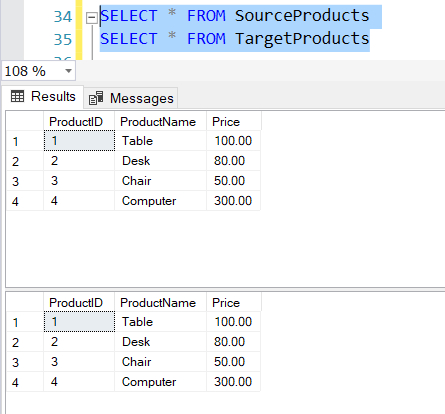 Now, if you see, all records with ProductID 5 and 6 are being deleted from the target table since these records are not available in the source. In this way, you can implement a SQL MERGE statement in a very simple yet powerful way and can handle complex business requirements.

If you would like to see a summary of all the actions that have been performed by the MERGE statement, then you may modify your existing script and include the following output actions. It will return us a list of records on which we have performed the merge and what operation has been executed on that particular record.

Although we have now understood how to write the MERGE statement from scratch and how to modify the script to include logic for handling inserts, updates and deletes, there are also some other key important points that we should keep in mind while preparing the scripts.

In this article, I have explained in detail about the SQL MERGE statement. This MERGE statement has been introduced in the SQL Server 2008 which brought a great revolution in writing simpler and maintainable code in SQL. The MERGE statement takes in two tables – a source and a target and compares the records based on a key column, often the index column, and then performs an operation on it. Being a database developer, I would definitely advise all young programmers to start using the SQL MERGE statement more frequently while using complex stored procedures in SQL.