What is Microsoft PowerShell?

PowerShell is a command-line language provided by Microsoft. It is the replacement of the Windows batch scripting tool known as DOS. It is mainly designed for the IT administrators to automate and control the Windows operating systems and other applications.

Following are the benefits of the PowerShell:

Arrays are the fixed-sized, sequentially ordered collection of the elements of any data types. It can be considered as the collection of the operators or variables. The arrays within the PowerShell can be processed using FOR loop and WHILE loop because all the elements in the array are of the same type, and the size of the array is known. The array in the PowerShell can be declared as follows:

In this article, I am going to explain a few methods, as well as the PowerShell string functions that are used to convert the string into an array. I have used the following functions of PowerShell.

Following is the output of the script 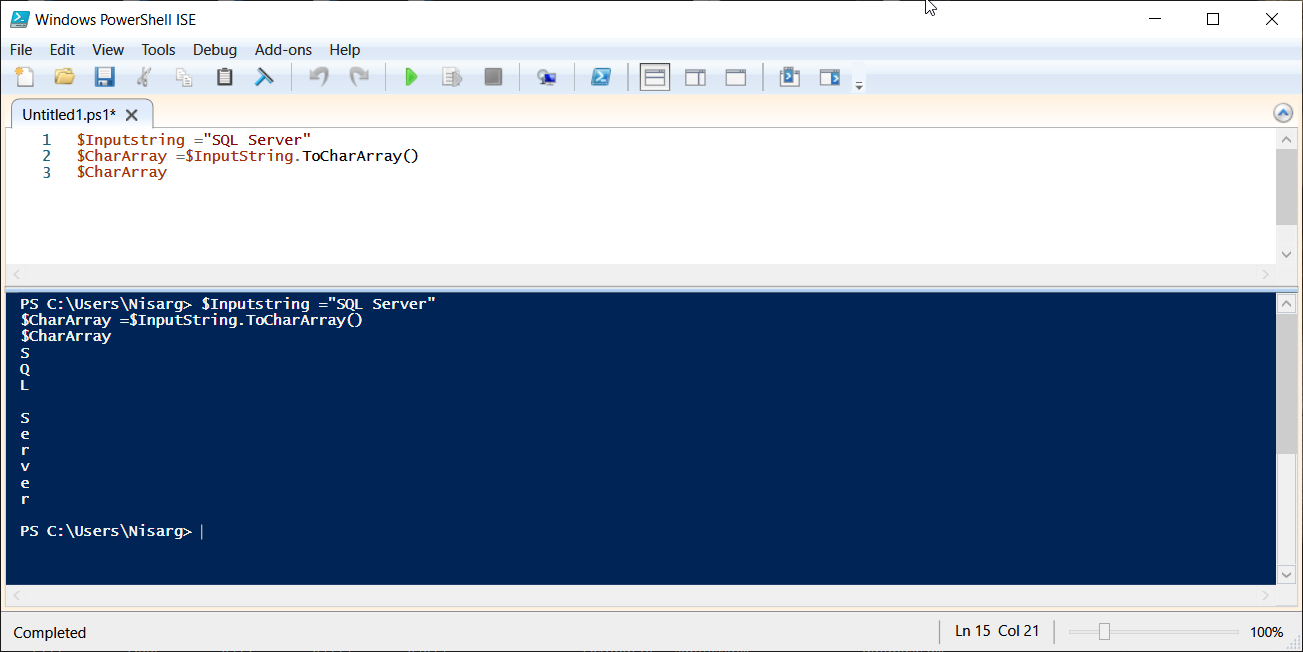 As you can see, we store the input string in $Inputstring variable, convert the string into the character array by using.TocharArray() function and store it in $CharArray variable and print each character within the array.

The .Split() function splits the input string into the multiple substrings based on the delimiters, and it returns the array, and the array contains each element of the input string. By default, the function splits the string based on the whitespace characters like space, tabs, and line-breaks. If you want to split the string based on the specific character, then you must specify the character in the second argument. Following is the syntax of the .split() function.

For example, we want to split the following string into an array of multiple words by “-” character. Following is the code:

Convert the input string into the array of the words:

Following is the output of the script: 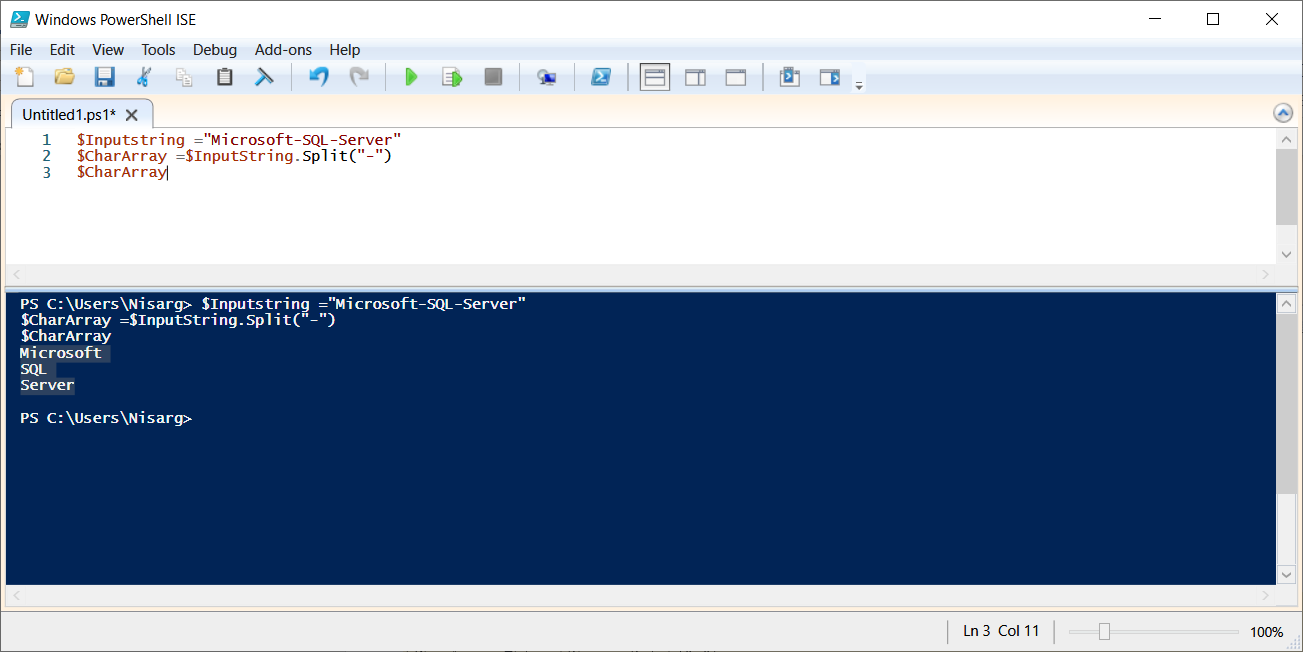 The above code splits the string based on the “-” character and saves the output in the $CharArray variable.

As you can see, we have assigned “Sonali Bhatt is a Database Administrator” string to $insputString variable, used .Split() function to split the string in multiple words and used index of the array to print the “Sonali” and “Administrator.”

This method can be used to split the string into two separate variables. For example, if you want to save the word “Database” in the $String1 variable and “Administrator” in the $String2 variable, then you should write the code in the following way. 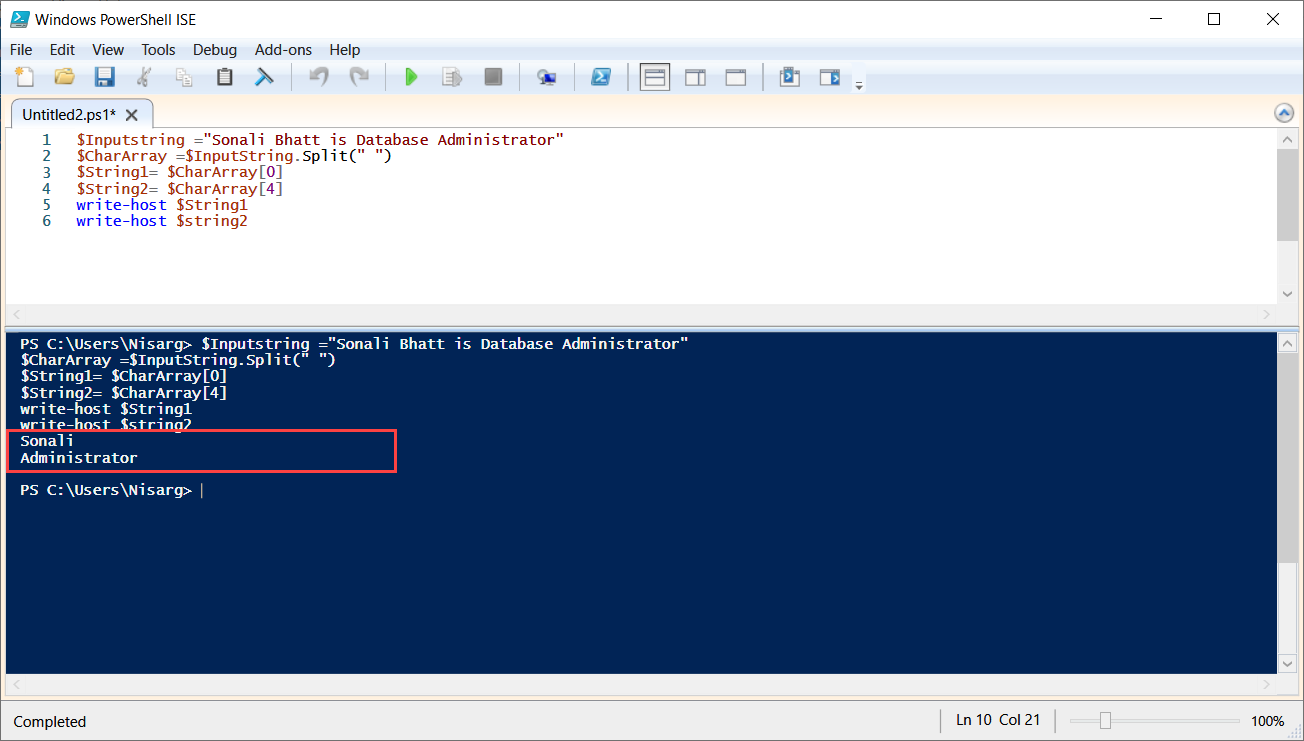 If you want to convert the string into an array of the multiple substrings or words using the .split() function, then you must specify the additional argument named “number of the substring.” For example, we want to convert the string ”Nisarg, Nirali and Sonali are Database Administrators” in the array of the three substrings, and the entire string must be split with “,” delimiter then the code should be written in the following way: 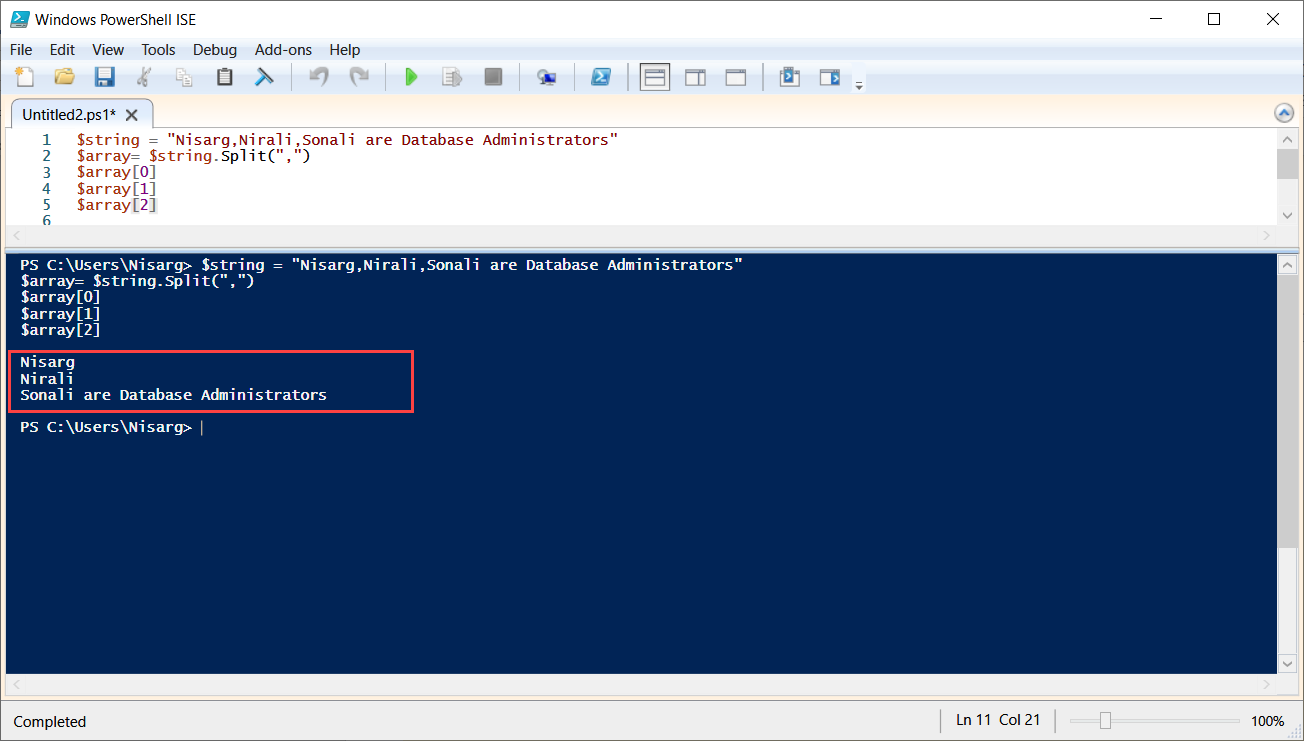 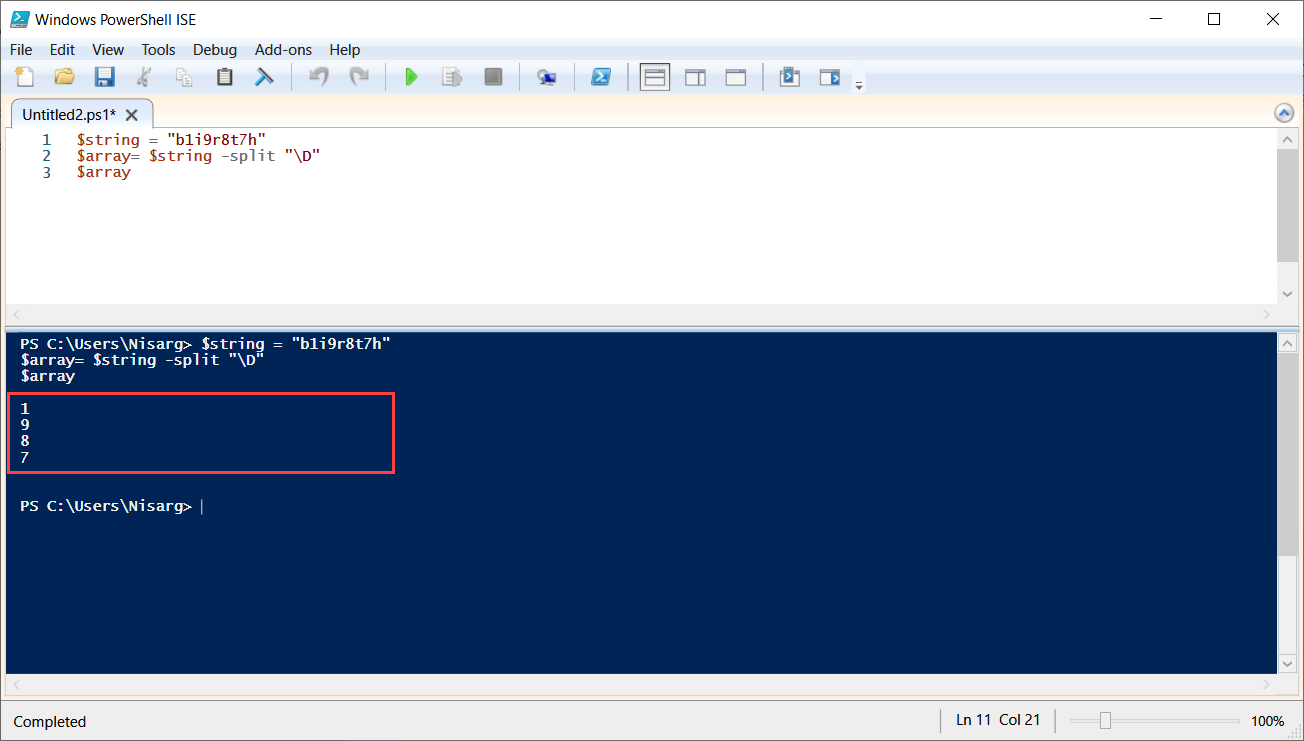 If you want to extract “birth” then the code should be written as following: 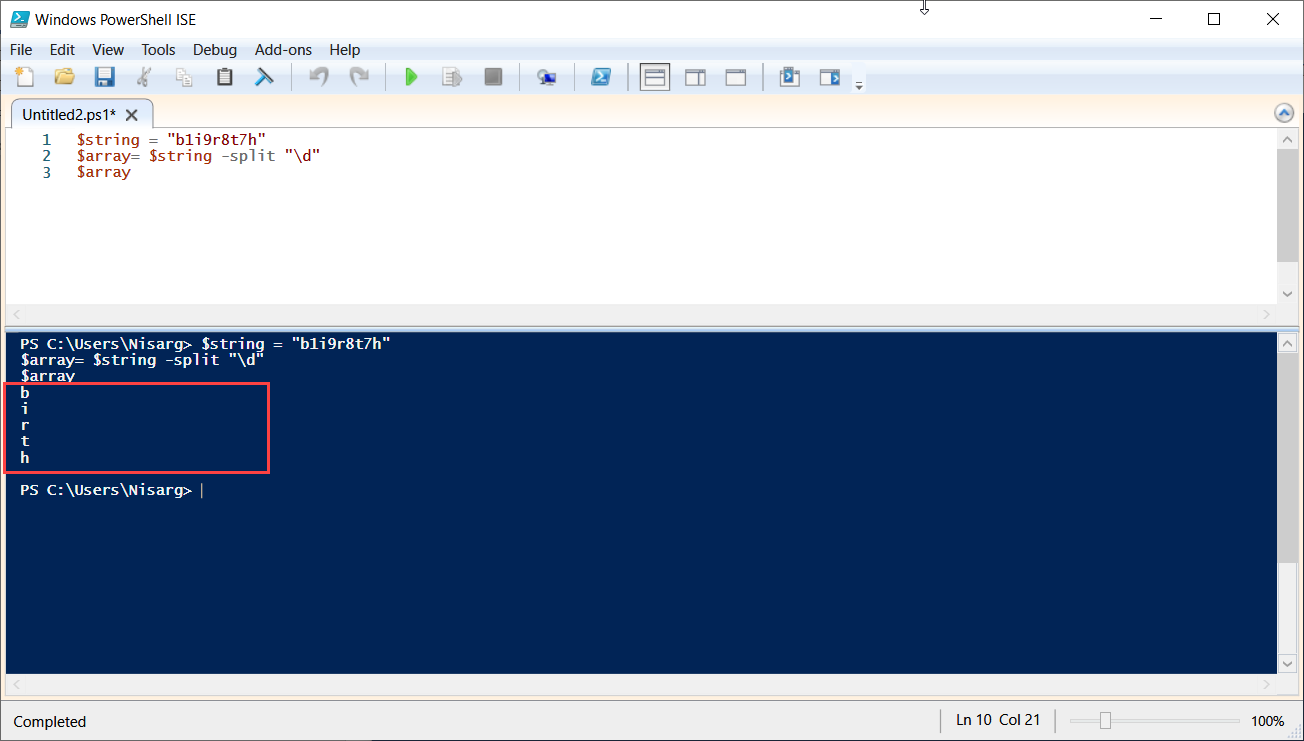 In this article, I have explained the PowerShell scripting and array variable in PowerShell. Additionally, I also covered PowerShell scripts to split a string into an array using .toCharArray() and .split() functions.