SQL Server 2017 brings a new query processing methods that are designed to mitigate cardinality estimation errors in query plans and adapt plan execution based on the execution results. This innovation is called Adaptive Query Processing and consist of the three features:

In this post, we will discuss the last one – Adaptive Joins.

Adaptive Joins were publicly introduced in the CTP 2.0, I advise you to read a post by Joe Sack Introducing Batch Mode Adaptive Joins to get know about this feature, because I will give only a brief introduction before making a deep dive into the Adaptive Join internals.

NL has two join strategies – naive nested loops join (inner loop scans the whole inner table or index) and index nested loops join (index on the join column of the inner table is used to find necessary rows and then those rows are applied to the outer row, also called Nested Loops Apply). Typically, the second one performs very well if you have rather small input on the outer side and indexed rather big input on the inner side.

HM is more universal and uses hash algorithms to match rows, so no indexes are necessary. You may refer to my previous article (Hash Join Execution Internals) for more details.

Threshold is a number of rows, which represents a point, at which NL is cheaper than a HM. This number of rows is calculated during the compilation and is based on the cost estimates.

In a query plan, Adaptive Join is implemented as a new operator “Adaptive Join”, which has three inputs. The first input is an outer (build) input, the second one is an input if a HM is picked and the third one if NL is picked.

Let’s look at the example. I’ll use sample DB AdventureWorks2016CTP3 and set the compatibility level to 140 as it is necessary for an Adaptive Join to be available. I’ll also create a dummy filtered Columnstore index so the optimizer could consider a batch mode execution. 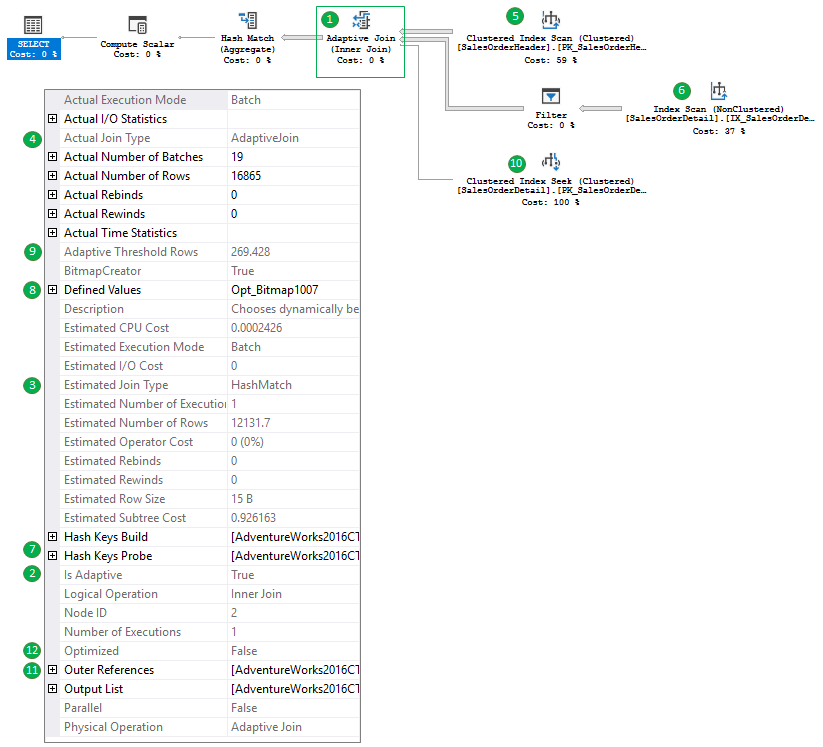 Summarizing the plan – we see a new operator which has three inputs and depending on the threshold rows may use one or another input and the one or another join strategies either HM or NL. This operator contains properties for both of them.

For a more detailed description, I’ll refer you to the Joe Sack’s blog post mentioned above and we will move on to some internals and undocumented stuff.

It is interesting to know how this new operator is optimized. To look at the process we will use the undocumented trace flags 8607 which outputs the physical operator tree and the trace flag 7352 which outputs the tree after a post optimization rewrite phase. Let’s run our example query with those TFs and statistics IO turned on.

If we switch to the Message Tab in SSMS we will see the following.

We see that after the optimization process the output tree is a concatenation (familiar to us Concat operator) of the output from the first table and two joins HM and NL (apply NL).

After the post optimization rewrite, we see an Adaptive Join operator.

You may also notice a spool operator, that one is used not to scan the first (build) input twice when we switch to a NL join. That is why we see a Worktable in the statistics IO output.

Interestingly, we may see this plan shape with a spool if we enable the undocumented trace flag 9415.

The plan would be: 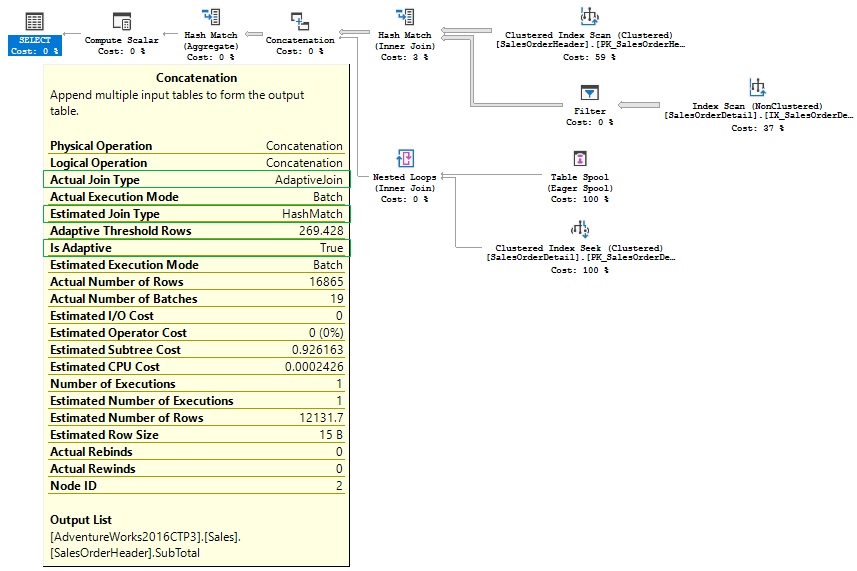 Notice some concatenation properties that we have seen earlier in the Adaptive Join operator. There is also a property Adaptive Threshold Rows (unfortunately, not shown in the tooltip). Both plans produced identical results in my experiments.

So far, we have found that an Adaptive Join undercover is a Concatenation operator with some extended properties. We’ll explore how it is physically executed later in the post.

We may see the following values as an adaptive threshold: 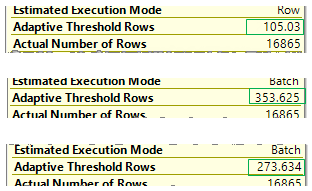 This means that a threshold depends on the estimates, so accurate estimates are still important. For example, estimates with parameter sniffing with parameters of the first input will also leverage the threshold. This situation is described very well in the Itzik’s post, referred above.

There is also one undocumented trace flag, that lowers the adaptive threshold to the minimum estimate (which is one row) plus one row, totaling 2 rows. That means that a NL join algorithm will be used only when there is one row of the first input.

Here is an example:

If we look at the threshold we will see:

The first way is to switch to compatibility level 130. But if you switch to the Compatibility Level 130 you will also disable all the other optimizer improvements.

There are few other ways you can disable Adaptive Joins, all of them are undocumented at the moment of writing this post, however, some of them are very promising to be documented in the future.

If we apply the undocumented trace flag 9398 to our sample query, we may see that there is no adaptive join in the query plan.

The plan has only a HM join:

We may also use a query hint to disable and adaptive join.

The plan shape is the same as in the previous example:

The exact same keyword is also available as a DB scoped configuration option in case you would like to turn off Adaptive Joins for the whole DB.

The last two methods (hint and config option) seem very promising to me to be documented at some point. Probably, it is not tested enough yet and not guaranteed to work properly, however, I hope they will be documented later.

In this section, we will talk about the situation when Adaptive Join is considered, but skipped due to some reasons. There is a new extended event adaptive_join_skipped which has a field reason. If we query the DMV dm_xe_map_values like this, we’ll see all the reasons:

We will get the following results:

That is all about the optimization internals in this post, but this is a very first light touch of this topic. In the next part, we will talk about the execution internals of the Adaptive Join.

To look at how exactly the Adaptive Join is executed I used the WinDbg. I put a breakpoint on the method sqlmin!CQScanRangeNew::GetRow to see the call stack.  Here is what I’ve got: 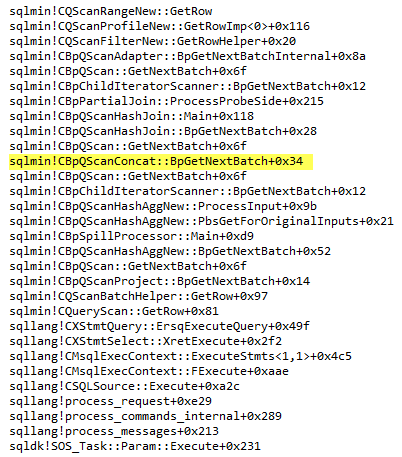 Reading bottom-top. At some point, you see that it is a batch mode Concatenation operator doing the Adaptive Join job and no separate adaptive join iterator.

For example, for this query, we will hit it 7 times (6 rows + one more time to make sure there are no more rows): 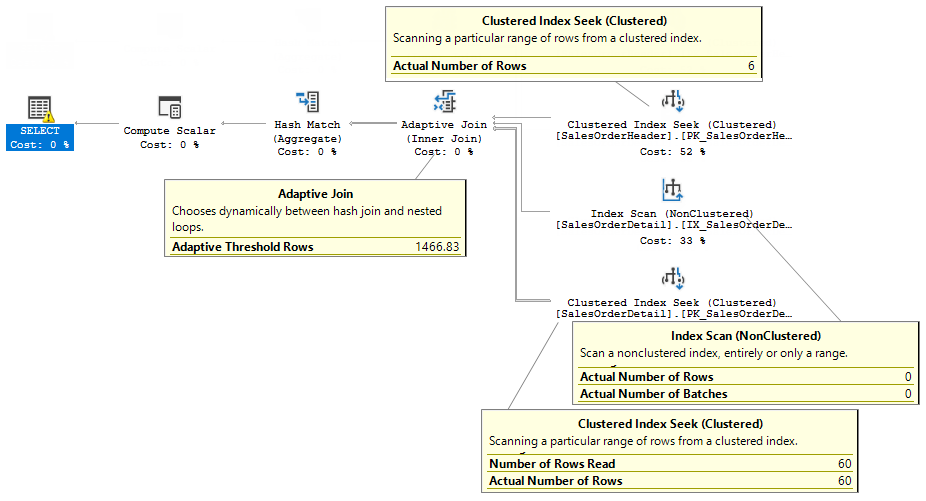 Adaptive Threshold is 1466 rows, however, the actual number of rows in the input is 6 rows and it is less than a threshold. Which is why Index Scan produced no rows, but the second branch with a Clustered Index Seek produced 60 rows.

As it was said earlier in the post, the input is not read twice from the source (SalesOrderHeader table), it is read from the internal structure, this structure was defined as a spool in the operator tree, but undercover it is called differently and has different properties – Adaptive Buffer Reader. But the physical operator is still Concatenation. 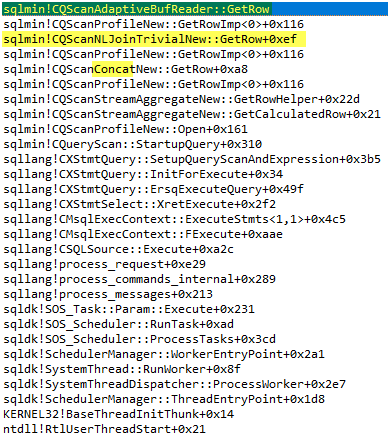 That’s all for that post. Thank you for reading!