In this article, we’ll walk-through the SQL Pivot and SQL Unpivot operators and how they can be useful to transpose SQL Server data. Also, we’ll discuss both static and dynamic ways to use PIVOT and UNPIVOT relational operators that can be used to transform aggregated distinct values as column(s) in the result-set by specifying all the column values in the PIVOT IN clause.

There are several ways to transpose a dataset from rows to columns and columns to rows. SQL Pivot is one of the techniques that allows transposing of rows to columns and performs possible aggregations along the way. SQL PIVOT and SQL UNPIVOT relational operators transpose a table-valued two-dimensional data into another form of data. SQL PIVOT transposes a table-valued expression from a unique set of values from one column into multiple columns in the output and performs aggregations. SQL UNPIVOT performs the opposite operation of SQL PIVOT by transforming the columns of a table-valued expression into column values.

In most cases, the static pivoting technique suffices the business requirement. For example, the monthly sales forecast, yearly sales split, quarterly sales aggregation, etc, where the IN clause columns remain static. In some other instances, we need granular details and the table-value expression is more dynamic in nature and all the time new set of the expression are included in the table then dynamic PIVOT would be the best choice. 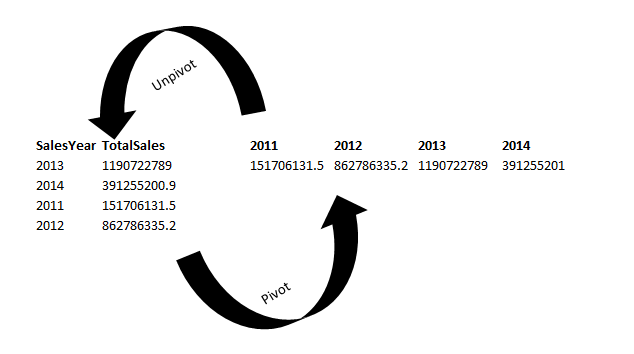 Note: In the above depiction, we can see that in the process of PIVOT, the column values are rotated from vertical to horizontal and UNPIVOTING is like rotating it from horizontal to vertical.

AS <Alias for temporary data set>

Getting started with SQL Pivot

Example 1: How to perform a SQL Pivot operation

Let’s picture the sample dataset derived from the AdventureWorks2014 database. In this case, you just got a simple dataset with SalesYear column along the one quantitative value TotalSales.

Now, the dataset is ready for pivoting. You’ve got SalesYear in the first column, TotalSales in the second column. If you asked to transpose the data, you have to take every distinct year in the column and these columns become the header of the pivot columns. So, 2011 becomes the first column, 2012 becomes its own column and so on. The actual values from the next column Totalsales, they stick with the pivot column headers. Now, the pivoting table would look like below.

Example 2: How to perform a SQL Unpivot operation

In the following example, the pivoted dataset is used to un-pivot the values. The key piece here is this was easy to do in getting transformed because we were able to create a pivot table as an intermediate step and then do the transformation using the unpivot operation.

Example 3: How to get quarterly sales using SQL pivot operation

Let’s see a few more examples to understand the pivoting concepts better. In this case, we’ll see how to get quarterly sales data aggregated based on the quarterly sales.

Before we jump into the solution, it is always recommended to work on creating a dataset for the PIVOT operation.

The following example gives the aggregated monthly sales spread over the sales year.

The following output shows the base data

The following output is a quarterly split of the sales data

Example 4: How to get monthly sales using a SQL pivot operation

Let us take a look into another example to see sales split data based on every month. In the following example, the IN clause values are generated as part of the DATEPART function. The DATEPART values are fed to IN clause of PIVOT operator.

The following output is a monthly split of the sales data

Let us address the monthly split of sales data using dynamic pivoting. So far, we discussed static pivot operations. In order to convert a static pivot operation to dynamic, we’ve to remove the hardcoded values from the IN clause. First, get the distinct expression from the dataset and then prepare a string by concatenating all the expressions. In the following example, the @columnname is used to concatenate all the expression. The concatenated expression is fed to pivot IN clause. The rest is a simple conversion of static SQL into a dynamic SQL and call @DML using sp_executesql stored procedure.

The sample is based on the SQL Server adventureworks2014 database. You can give a try and test all the samples yourself. If you’ve any question, please feel free to comment below…