Some time ago, on the 24HOP Russia I was talking about the Query Processor internals and joins. Despite I had three hours, I felt the lack of time, and something left behind, because it is a huge topic, if you try to cover it in different aspects in details. With the few next articles, I’ll try to describe some interesting parts of my talk in more details. I will start with Hash Join execution internals.

The Hash Match algorithm is one of the three available algorithms for joining two tables together. However, it is not only about joining. You may observe a complete list of the logical operations that Hash Match supports in the documentation: 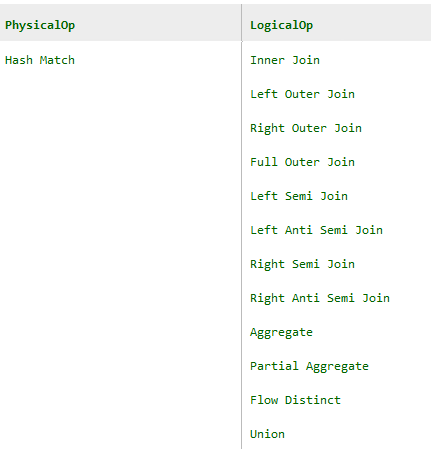 There are quite interesting logical operators implemented by Hash Match, like Partial Aggregate, or even more exotic Flow Distinct. Still, all that is very interesting, the focus of this post is on the Hash Match execution internals in the inner join row mode for regular tables (not in-memory tables).

The simplified process as a whole might be illustrated as follows. 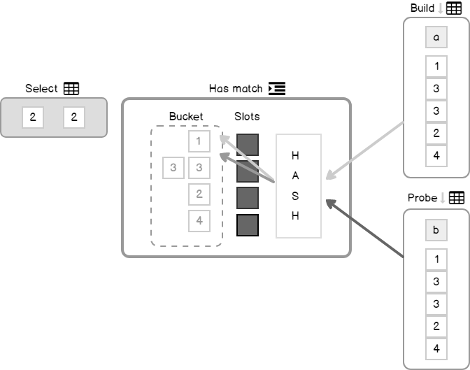 Hash Match in the join mode consumes two inputs, as we are joining two tables. The main idea is to build the hash table using the first “build” input, and then apply the same approach hash the second “probe” input to see if there will be matches of hashed values.

Query Processor (QP) is doing many efforts while building the plan to choose the correct join order. From the Hash Match prospective, it means that QP should choose what table is on the Build side and what is on the Probe side. The Build size should be smaller as it will be stored in memory when building a hash table.

Building a hash table begins with hashing join key values of the build table and placing them to one or another bucket depending on the hash value. Then QP starts processing the probe side, it applies the same hash function to the probe values, determining the bucket and compares the values inside of the bucket. If there is a match – the row is returned.

That would be the whole story if we had infinite memory, but in the real world, it is not true. More to the point, SQL Server allocates memory to the query before the execution starts and does not change it during the execution. That means that if the allocated memory amount is much less than the data size came during the execution, a Hash Match should be able to partition the joining data, and process it in portions that fit allocated memory, while the rest of the data is spilled to the disk waiting to be processed. Here is where the dancing begins.

A couple of pictures to illustrate the algorithm. The first one depicts the structures.

Probe – second input used to check on a hash table.

Hash Table – an array of slots.

Hash Bucket – a linked list anchored to a slot.

Partition – a group of buckets.

Hash – the hash function applied to the joining value.

Worktable – table located in memory and used to save build input rows.

Workfile – space in tempdb used to store the data that do not fit in the Worktable. 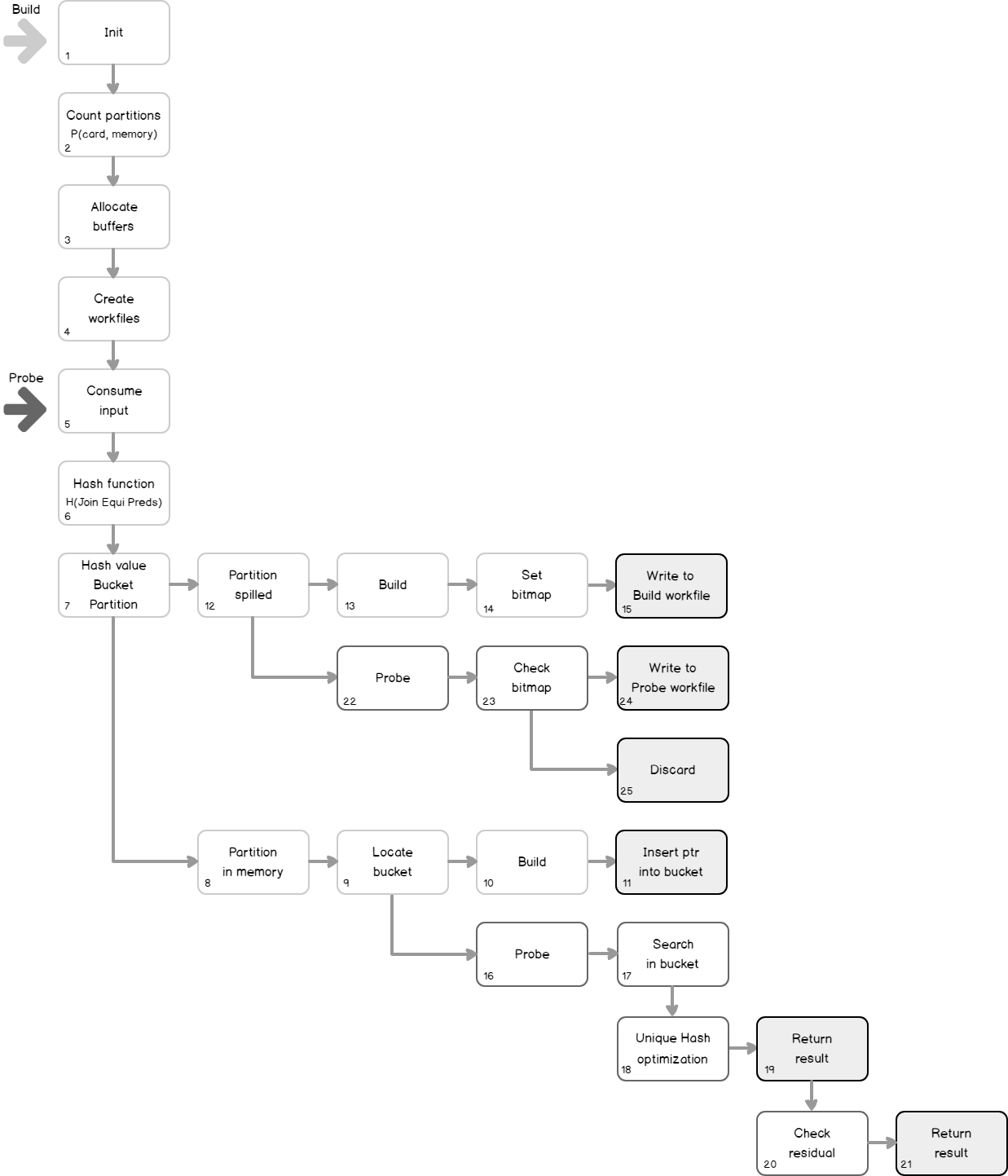 The second one is the logical algorithm. Let’s go through it step by step.

Let’s say we iterate through this process several times and filled all the Worktable, but still having rows in the build input. Because we are out of memory, we should solve it somehow. QP takes the largest size partition and moves it to the tempdb Workfile that was initialized in step 4 and is associated with that partition.

Repeating these steps until all the input is consumed and processed. So far QP built the hash table and is ready to probe. Interesting that the probe may reuse some of the steps of the algorithm.

5-7. Starting from the step 5 and moving to 7, this time consuming the probe input.

Let’s imagine, that the partition for the hashed probe value is in memory.

Let’s imagine, that the partition for the hashed probe value is spilled.

After the QP process all the rows from the probe input – the trick happens. Remember the spilled partitions, those written in Workfile into for the build and probe phases. Now, this data act like a new input into Hash Join, and the process is repeated from the step 1! Recursion.

Hash Match starts from the in memory and spills partitions to the Workfile if necessary. If the spilled partition, after reading it from tempdb is still too huge to fit in memory, it splits one more time and the whole process goes to the deeper level of recursion and so on, until the partition will fit in memory.

We may observe the recursion level through in the actual plan warning section (from SQL Server 2012) or using Extended Events, or Profiler.

What if partitioning has no effect and the size of a partition remains the same, for example, there are a lot of duplicates, each and every time going to the same partitions increasing its size. From the certain point of recursion levels (I observed 5), that situation is considered to be a hash bail out. Meaning that a hashing algorithm is no more used for joining. Instead, a kind of loop algorithm is used comparing rows. This happens not for the whole input, but only for the overflow partitions, and this is a very rare situation. I’ve asked several people, if they had experienced hash bailout in real life and got a negative answer.

If due to cardinality estimation error or bitmap filtering the probe side became smaller than the build side, Hash Match will reverse roles switching Build and Probe side. This behavior is known as Role Reversal.

After theoretical part, let’s do some action and observe how it works. We’ll start with a simple hash join that fit in memory. For the purpose of demonstration, I’ll create two rather big heap tables, 1 000 000 rows each. With the help of TF 7357 we will see some execution details.

Creating and filling the tables, and issuing the query

If we switch to the message tab, we’ll see a few interesting debug messages.

The first one, “Unique hash optimization”, is printed during the compile time. If you re-run the example with column “a” defined as nullable, then you won’t see this, but you will see the residual predicate property in the query plan, that means, that QP need to check this predicate also before concluding a match.

The second one is printed during the execution time and contains a couple of interesting things:

RowT – estimated number of rows to fit each partition

ERows – estimated number of rows on the build side

This output is produced by the function CQScanHash::PickInputAndPrepareOutput, this function might correspond to logical step one in the algorithm described above, that means it is called at every recursion step and is very convenient to observe hash joining process.

We observe several output lines, one line per iteration, for the last four lines recursion level is 1 and the Role Reversal behavior was involved – RoleR = 1.

Interestingly, there is a trace flag 7359, that disables bitmap filtering (step 14, 23). Lets’ do this with exactly the same query, to see what will happen, and how effective is bit-vector filtering.

What we will see is: 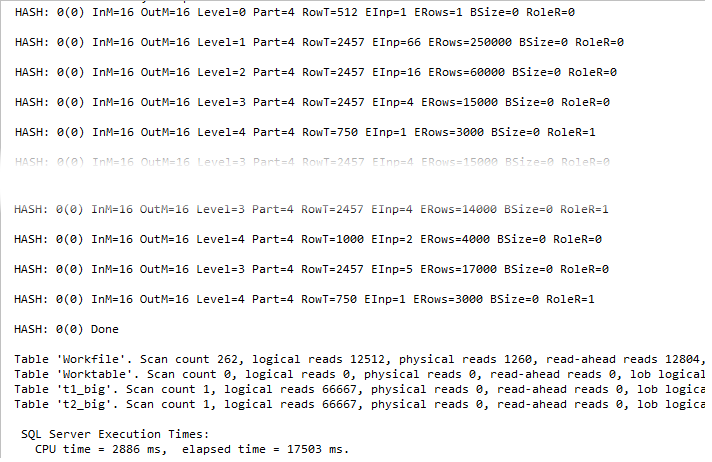 A few interesting notes about this output. First, the BSize = 0, i.e. there is no bit map. Persistent reader may check the invocation of the function CHashBitmap::Init in WinDbg. Without the TF 7359 it performs 510 instructions, doing some memory allocations and other actions, with TF enabled it returns in 14 instructions doing nothing.

Because of the disabled bitmap filtering, QP could not discard rows at the step 23,25, it should write to the probe Workfile every input row that corresponds to the spilled partition.

I have never experienced a bailout situation in the real world queries, however, just for curiosity, I decided to reproduce it. For that purpose, we need tables with many duplicates, which will make partitioning technique not efficient. You can observe the bailout through Profiler or Extended events:

The above-mentioned TF allows seeing what kind of bailout it is. There are two of them: bailout and dual input bailout. The last one we will observe in action in the repro below. 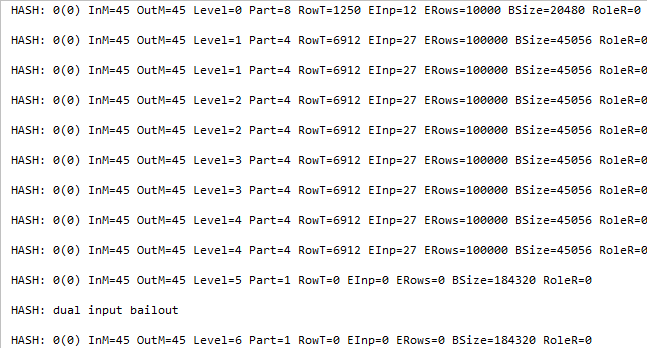 Dual input bailout at level 5. Also, notice the number of partitions before the bailout is considered – it is 1, meaning that partitioning gives no effect.

After preparing and publishing the article for the very first time, I have found a great article by Nacho Alonso Portillo from Microsoft about bailouts: What’s the maximum level of recursion for the hash iterator before forcing bail-out? This article explains the observed behavior about the recursion level 5 before a bailout, so I quote a related piece of information: 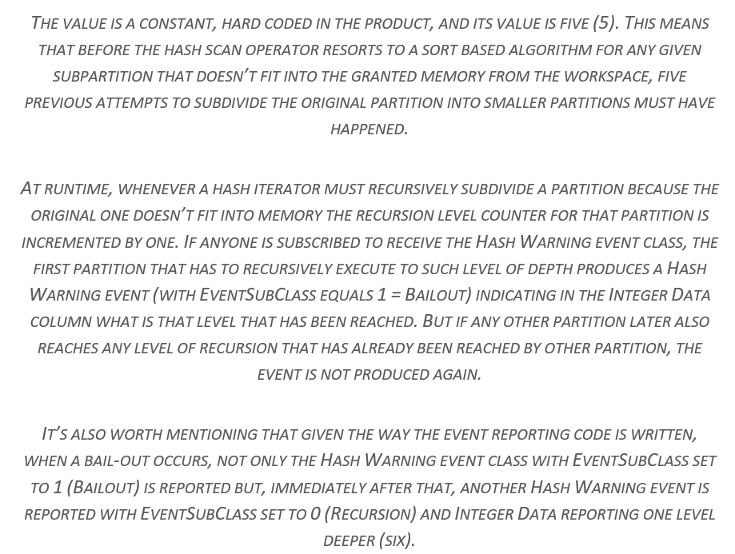 Sharp-eyed reader may have noticed the MAXDOP hint in the test queries. It was placed there for two reasons: the simplicity of the query plan, and that TF 7357 does not produce output to console for the parallel hash join. However, it is still possible to see this in action. Add TF 3605 to direct output to the errorlog, and check it after the execution.

I used the following sequence of commands 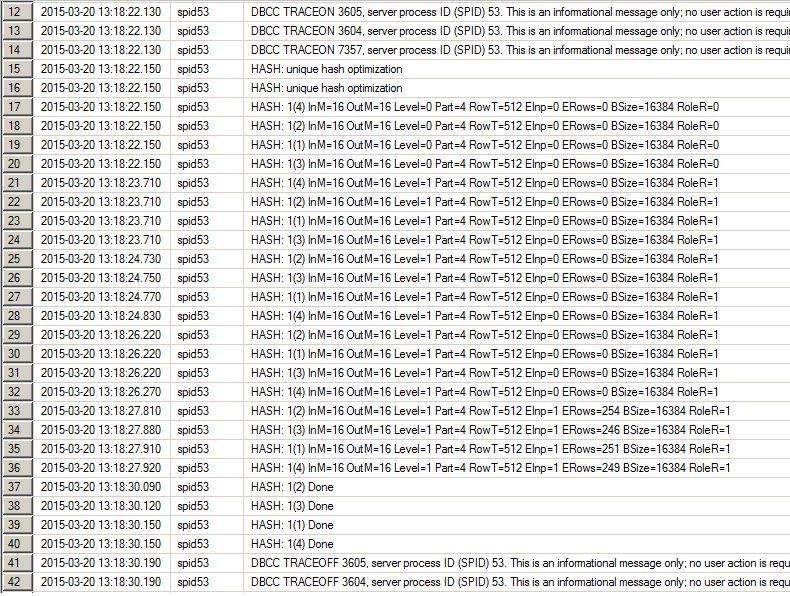 You may see the output in the errorlog, for precise information use the numbers that specify the Query Plan NodeID and Thread:
HASH: <NodeID>(<Thread>) …

Next article in this series: