This post opens a series of blog posts dedicated to my observations of the new cardinality estimator in SQL Server 2014. But, before we jump to the new features, I’d like to provide some background, to make the next posts clearer.

We’ll start by discussing the role of Cardinality Estimation in SQL Server, trying to answer – what is it and why it is needed.

SQL Server has the Cost Based Optimizer. The optimizer chooses the cheapest plan, where cost represents an estimate of the resource consumption.

A lot of things are not included in this general list, however, they are also influenced by cardinality.

Let’s create a simple synthetic database “opt”, it will be used in this and future blog posts for the simple demos. It contains three plain tables of 1000 rows each with primary keys, two of them have a foreign key relationship.

Depending on the estimated number of rows (estimated cardinality), we get different plans, even in such a simple case! 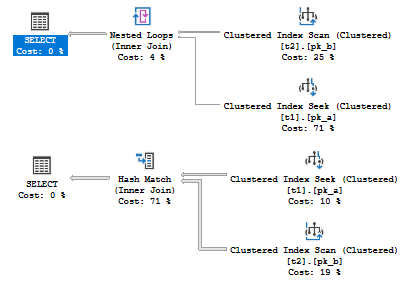 The only thing that is different, is the estimated number of rows. These different estimates lead to, at least, three item changes, according to the list mentioned above:

Now we may see, how sensitive is the Query Optimizer to the cardinality estimation. Wrong estimates may lead to a very inefficient plan, that’s why it is so important component of SQL Server, and that’s why I think it is worth to spend time learning how these estimates are made.

Next we’ll discuss a place of Cardinality Estimation in the whole optimization process.