In this post, we are going to take a deeper look at the cardinality estimation process. We will use SQL Server 2014, the main concepts might also be applied to the earlier versions, however, the process details are different.

The algorithms responsible for performing the cardinality estimation in SQL Server 2014 are implemented in the classes called Calculators.

To be more specific, these classes might not contain the one estimation algorithm, rather they join together a set of specific algorithms and drive them. For example calculator CSelCalcExpressionComparedToExpression may estimate join cardinality using join columns histograms in a different ways, depending on the model variation, and the specific estimation algorithms are implemented in the different classes, used by this calculator.

I mentioned a model variation – this is another new concept in the new cardinality estimation framework. One of the goals of implementing the new cardinality estimation mechanism was to achieve more flexibility and control over the estimation process. Different workload types demand different approaches to the estimation and there are some special cases when two approaches may contradict each other. Model variations are based on a mechanism of pluggable heuristics and may be used in special cases.

Let’s consider a simple example of a query, in database “opt” , that selects from the table and filter rows.

Note: Normally, the optimizer would join together a filter and a scan operator on the phase when the Physical Operators Tree is converted to the Plan Operators Tree (this process is known as Post Optimization Rewrite), to avoid a separate Filter plan operator and reduce the cost of passing rows between Filter and Scan operator. To prevent this, for demonstration purposes, I use trace flag 9130, that disables this particular rewrite.

This query has the following simple plan:

Let’s use the undocumented TF 2363, mentioned above, to view diagnostic output. We also use TF 8606, described in the previous post, to view logical operators tree with TF 8612 to add cardinality info. TF 3604 is also necessary to direct output to console.

If we switch to the message tab, we’ll see the following output: 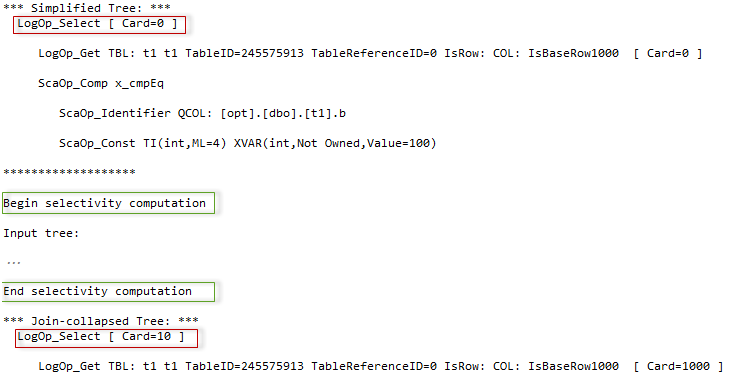 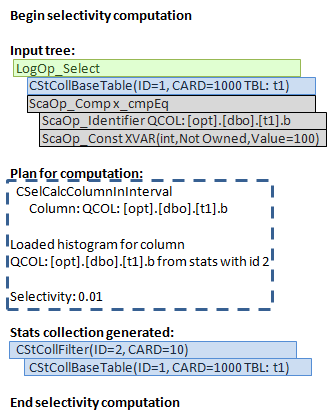 The process starts with the input tree of logical operators. For that simple case there are only two of them:

The tree is depicted on the left of the second picture. The cardinality calculation goes bottom-up, starting from the lowest operator (or the up-right if we look at the graphical plan). In the diagnostic output, we see that a base table statistics collection was loaded for the lowest logical operator “get table”.

Next, the filter selectivity should be computed. For that purpose, the plan for selectivity computation is selected, in our case, this would be the calculator – CSelCalcColumnInInterval. The one may ask, why “interval”, if there is an equality comparison. The answer is, that our column is not unique and so several rows are possible. If it had a unique constraint or index the calculator would be CSelCalcUniqueKeyFilter.

The calculator computes the selectivity using input statistics from the operator get (the output even tells us what histogram was loaded), and a set of algorithms, that represents this type of calculator and are based on the mathematical model, discussed in the previous post. The computed selectivity is 0.01.

The query below joins two tables, filters and groups data for the distinct purposes.

It has the following plan:

A few notes about this plan.

The DISTINCT clause is used in the query, that means only unique pairs of values t1.b and t2.b should be returned. To satisfy this, the server uses grouping by means of the operator Stream Aggregate. What is worth noting, that one of the grouping columns – column t2. b has a primary key defined, therefore, is unique, because of that, the server may not group by that column and leave only t1.b for the aggregation. That means that the aggregation could be safely done before the join, to reduce the number of joining rows.

We filter on the t1.b column and join on it also, so the filter could be applied to t2.b column also. The filter operator itself is not present in the plan as a separate plan operator, it is combined with a seek and scan.

The logical operator tree for that query looks like this: 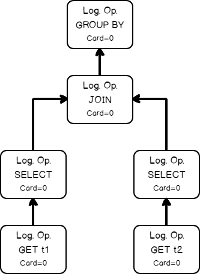 Let’s now watch, how goes the estimation process. I’ll not provide a TF diagnostic output here, because it is too verbose, rather, I’ll convert it into a graphical form, the series of pictures.

That’s how it works!

I’d like you to take out of this part one very important thing, that might be applied in practice. As you saw, the estimation goes from bottom to top, using child node statistics as an input to estimate a current node. If the estimation error appears at some step, it is propagated further, to the next operators. That’s why, when you try to struggle with inaccurate cardinality estimates, try to find the bottom most inaccurate estimate. Very likely it skewed all the next estimates. Don’t struggle with the top most inaccuracy, because this inaccuracy might be induced by the previous operators.

For the truth, I should say, that sometimes there are curious cases, when the two incorrect estimates annihilate each other negative impact, and the plan is fine. If you eliminate one of them, the fragile balance is ruined and the plan becomes a problem. By the way, that is one of the reasons, why Microsoft was very conservative to introduce new changes to the cardinality estimation and left them “off” by default and demand a trace flag to use it.

In the next post we’ll see how the “old” cardinality estimation behavior may be used in SQL Server 2014.