The next topic in our Data Mining series is the popular algorithm, Time Series. Since business users want to forecast values for areas like production, sales, profit, etc., with a time parameter, Time Series has become an important data mining tool. It essentially allows analyzing the past behavior of a variable over time in order to predict its future behavior.

To demonstrate time series analysis using SQL Server, we will use the vTimeSeries view in the AdventureWorksDW2017 sample database. Here is the sample data set: 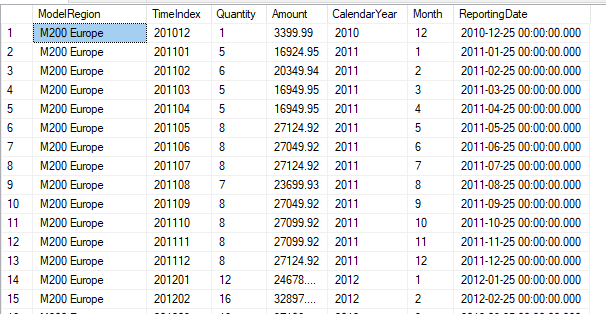 We will use only the first four columns, which are ModelRegion, TimeIndex, Quantity and Amount.

As discussed in the first article, create a sample analysis service project with Visual Studio or SQL Server Data Tools (SSDT). Then, create a Data Source connection to the AdventureWorksDW2017 database and add the vTimeSeries view to the Data Source View.

Then, select the necessary attributes to create the Time Series model. The Time Series model needs two compulsory parameters and one optional parameter. It requires a single time column which will be the key for the model. This has to be a column with the same intervals. For example, if you have monthly data, the entire data set should be monthly and should not contain different intervals of data. Another compulsory column is the column that you want to predict from the Time Series technique. This should be a continuous and numerical variable such as sales, temperature, quantity, etc.

Optionally, you can define multiple series in a one-time series. For example, in a sales time series, you might want to analyze the trend by region. Therefore, the region will be an additional and optional key.

Here is the configuration for the parameters in the Time Series: 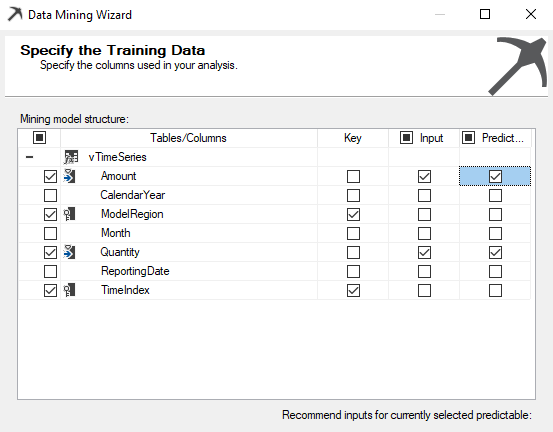 In the above configuration, both Quantity and Amount are configured as the input and prediction columns. As mentioned before, these two columns should be numerical and continuous variables. TimeIndex is the key column that is used to identify the time component of the data set. ModelRegion is the optional series column from which users can predict Region and Product Model quantities and sales amounts.

The following image shows data types, in case the user wants to change them:

However, in this example, you can leave the default data types as it is. With that, time series model creation is done, and the data mining model needs to be processed.

Let us view the time series trend with the predictions:

In the graph, predictions are shown by dotted lines. One important thing to remember is that the time series does not understand time index cycles. It just uses the number that follows the previous one. For example, after 201212, the next number will be 201213, not the calendar designation 201301.

From the configuration available at the top of the Mining Model Viewer, the user has the option to see more information.

By setting the Show Deviation to on, you can view the deviations for the predicted values to judge the accuracy of your model. A lower deviation means higher accuracy. Deviations are shown in the following image: 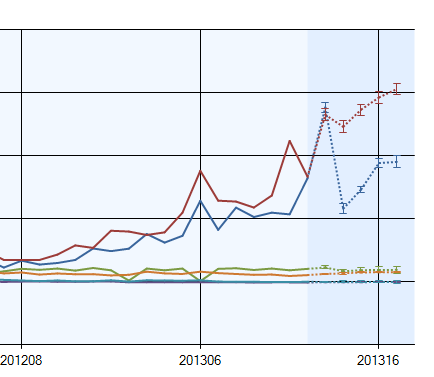 In the Mining Models tab, you can set the predictive attributes for Predict or PredictOnly as shown below: 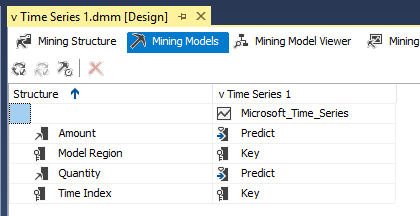 FORECAST_METHOD specifies which forecasting algorithm is used. If the MIXED method is chosen, it creates models for both ARTXP and ARIMA time series algorithms, and their results will be combined during the prediction phase. In the standard edition of SQL Server, the models are combined using an automatic ratio that favors ARTXP for near-term and ARIMA for long-term prediction. In higher editions such as Enterprise edition, the models are combined and weighted according to the value set for PREDICTION_SMOOTHING. When the FORECAST_METHOD is set to either ARTXP or ARIMA, the value for the PREDICTION_SMOOTHING parameter is ignored.

For Time Series, there cannot be gaps in the data set. However, due to various practical reasons, there may be instances where all data cannot be captured. SQL Server Time Series provides a method to substitute missing values. The default is None, which is suited for a data set without missing values. Mean values set the mean of the existing values to the missing values, whereas the Previous option sets the missing value with the previous values. Also, the user can set a constant value; this is not recommended.