In this article, we will be discussing Microsoft Sequence Clustering in SQL Server. This is the ninth article of our SQL Server Data mining techniques series. Naïve Bayes, Decision Trees, Time Series, Association Rules, Clustering, Linear Regression, Neural Network are the other techniques that we discussed until this article.

What is Sequence Clustering

The Microsoft Sequence Clustering algorithm is a combination of sequence analysis and clustering. This technique identifies natural groups (clusters) of similarly ordered events in a sequence.

In Sequence Clustering, we will be looking at the events which have occurred in sequence. Then the clustering is applied to that data set. The clusters can be used to predict the likely ordering of events in a sequence based on known characteristics.

If you wondering how Google ranks its pages, it is by using an algorithm called a PageRank. Page rank uses Markov Process. This technique was introduced by the mathematician named, Andrey Markov (1856 – 1922) in 1906. In Hidden Markov Process, we are looking at exploring the sequence of events.

By default, there won’t be any relationships between these two views since there are no relationships built at the database level. Therefore, that relationship has to be built as shown in the above screenshot.

Next is to select the technique for the mining model. As shown in the below screenshot, we will be selecting the Microsoft Sequence Clustering from the available list. 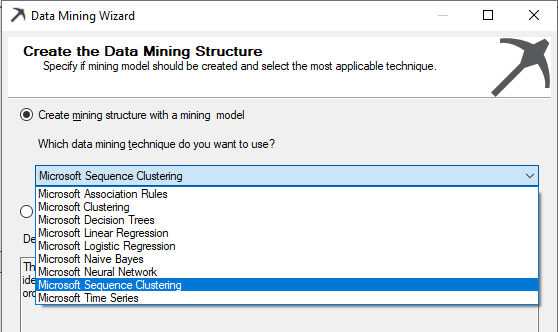 After choosing the database source view, next is to choose the Case and Nested tables. Unlike most of the other techniques, there are two tables in this technique.

Let us see what our objectives in this sample data are. If you recall what we did for the association rule, is that we are looking at what are the similar items selling together. In that example, we looked at only Order Number and the Model as inputs.

In the case of sequence clustering, we are looking at the sequences. Therefore, we will include the Line Number as the sequence parameter. Though this may not be a correct business case, however from the existing sample data, this is the only dataset that has a sequence attribute.

Therefore, we have selected Key, Input and Predict as shown in the following screenshot. 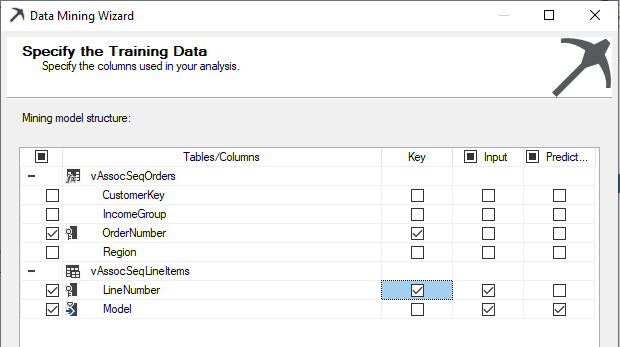 Ideally, we can choose CustomerKey as the key, but in this example, we do not have adequate data for the above case.

In the next couple of screens, default values are accepted.

From the algorithm, it is identified that the Line Number is the Key Sequence as shown in the above screenshot.

After the project is created, then the mining model has to be processed. After the model is processed successfully, the next is to view the results.

Since we have not limited the number of clusters, 15 clusters were defined. Clusters are named with default values that can be modified by looking at the cluster properties. 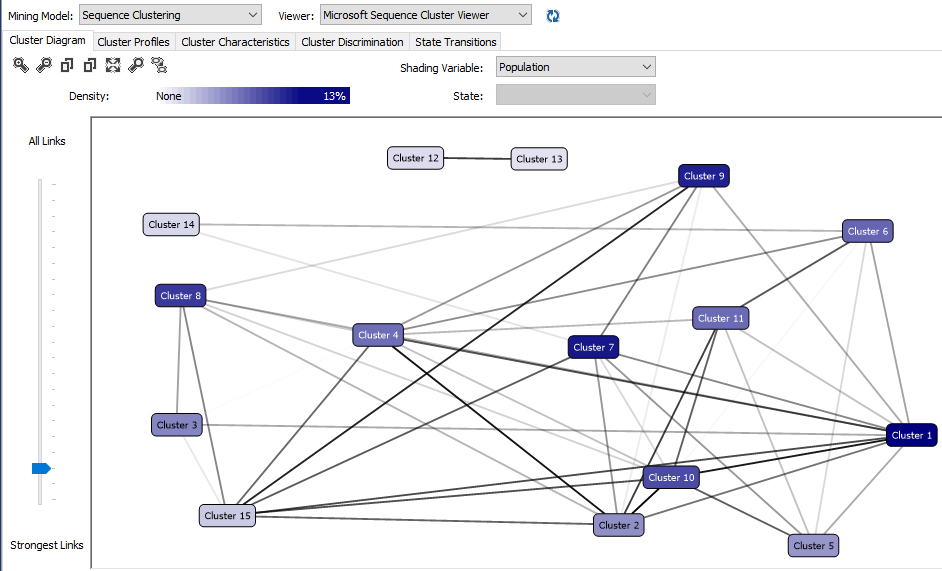 After renaming the clustering to more understandable names, the cluster diagram is visualized like follows. 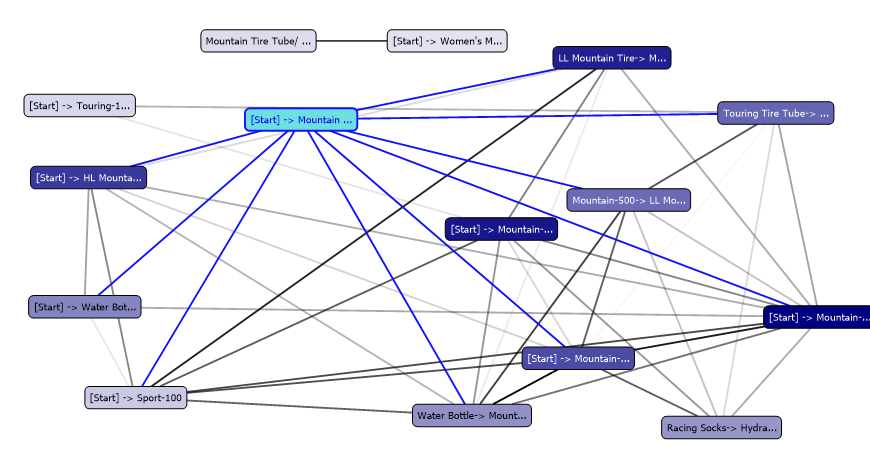 In the cluster profile view, you can view all the cluster state and the transition in one view as shown below.

Since we have renamed the cluster names, those names are reflected in this view as well as in other views.

The following screenshot shows the cluster characteristics for a selected cluster. 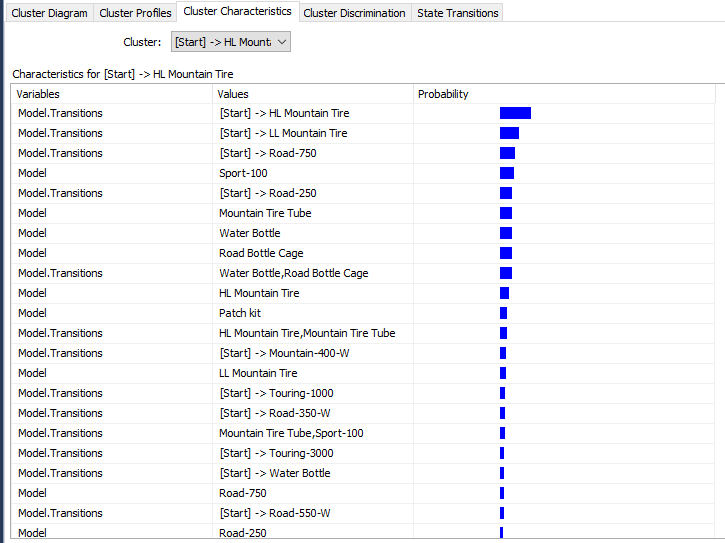 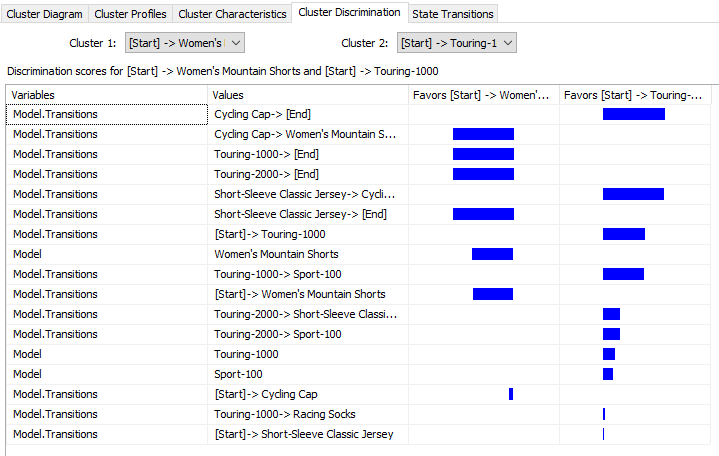 The above screenshot shows that in the first cluster more favors towards the Cycling Cap -> Women’s Mountains Shorts while the second cluster favors ending the sequence with Cycling Cap.

State Transactions view is the only view that is new to the Microsoft Sequence Clustering technique. This view is created by using the Hidden Markov Model.

Let us analyze a few cases of state transactions from different clusters.

In the following state transition diagram, it indicates that the customer buys a water bottle, not as the first choice.

The following screenshot shows another case. In this case, people who are buying Sport-100, there is a chance that they will buy the same item again to a probability of 0.90. 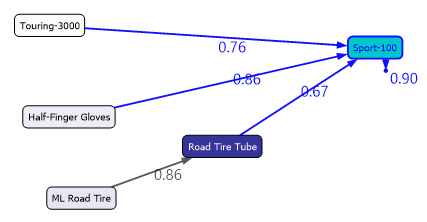 The following screenshot has a few more scenarios. 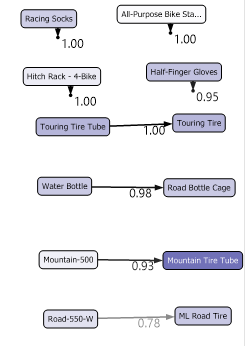 In this cluster, it is evident that customers are buying the same item again. Further, if your client is buying a Touring Tire Tube, there is a 100% probability that he will buy a Touring Tire.

In Microsoft Sequence Regression there are two important parameters. Those two parameters are CLUSTER_COUNT and MAXIMUM_SEQUENCE_STATES. During the example, we got 15 clusters which are difficult to manage, so we can reduce the cluster count to a manageable number such as 5-8. MAXIMUM_SEQUENCE_STATES define the number of states. The number of states should be around 20-30 maximum. If you are setting this value to a number greater than 100, your model will be meaningless. The default value of this parameter is 64.

Let us set CLUSTER_COUNT to 5 and MAXIMUM_SEQUENCE_STATES to 8 and reprocess the Microsoft Sequence Cluster Model. Following is the Markov Model for the entire population. 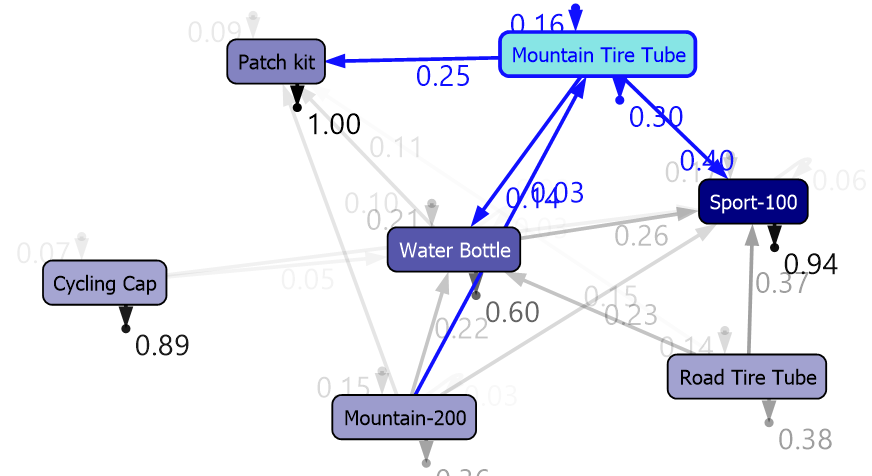 You can see that it is clearer than the previous model.

This is the last algorithm of the Microsoft SQL Server family. Microsoft Sequence Clustering in SQL Server is the combination of sequence and clustering techniques. In this technique, common sequences are clustered.