Information Technology is unimaginable without the relational database model. The very backbone of IT is data, and SQL is one of the best ways available out there, to manage it. By choosing this stairway series “SQL essentials for beginners”, you have taken your first step in understanding the industry from a data perspective and your career journey is going to be nothing short of exciting. This introduction to SQL is aimed at giving you that right launch.

This article introduces the basic and important features of SQL in SQL Server. This guide demonstrates the working of SQL starts from creating tables, defining relationships, and writing Transact-SQL (T-SQL) commands, and so on.

As is the tradition, we will take a few glimpses at the history of SQL, look at what makes SQL so powerful, and introduce ourselves to the different types of commands and data types.

In the digital world, data becomes so vital to any business. The enterprises are considering that data is the key to business. The data importance in any form i.e. structured and/or unstructured data are unquestionably in focus—data manipulation and data transformation are critical. It is important to know SQL and understand how to manage the data in relational databases has become an antique skill in the tech arenas.

The existence of SQL is already in use for several decades. However, because of a social and digital explosion in recent days, SQL got the highest prominence in the data industry. It is evolving and continues to evolve to reach greater querying capabilities.

In today’s world, all applications are built on structured or unstructured data of one sort or another. But, the database software is designed in such a way that the data is stored in a structured format so that the data is read efficiently in useful formats and combinations.

SQL is considered as the standard language for Relational Database Management Systems (RDBMS). All the relational database management systems such as MS SQL, MySQL, Oracle, and PostgreSQL, etc., use SQL as the standard database language.

We are in a situation that everyone needs to understand the importance of data. The data engineers are so much of demand to manage the data. Altogether, data privacy has taken a different stance in the data hierarchy.

History of SQL in a nutshell

I will try to keep this short. Dr. Edgar F. Codd proposed a relational model of working with data in 1970. This was in order to enable computers to work with what he called “large data banks”. This model was so influential that several languages were developed to work with this model. SQL was one of the first commercial languages among these. SQL became a standard of ANSI sixteen years after the influential paper by Codd. ISO adopted the standard the next year. Software corporations picked up from here and developed their own flavors of the language, which more or less were inter-operable. For instance, Oracle and Microsoft have their own database products. These can work more or less similar to the data created by one another.

SQL progressed from there. In 1992, SQL-92 was released. This was a major release, which included new data types. It also included several other features such as string concatenation, substring extraction, data-time calculations, etc. More operations, such as UNION, JOIN, intersections, etc. were introduced along with conditional constructs such as CASE. ALTER and DROP operations came into being, and so on.

In 1999, SQL got Reg-Ex matching, which made working with it more efficient, along with support for recursive queries. SQL also started to support arrays, object-oriented features, etc. In the early 2000s, XML handling came into being. The W3C (or the World Wide Web Consortium) published XQuery which lets applications integrate queries into their SQL codes, thereby enabling it to work with vanilla SQL data along with XML documents. In 2008, the ORDER BY clause was made part of the standard, along with introducing TRUNCATE and FETCH.

In 2011, temporal data support was added, along with enhancements to FETCH and window functions. Finally, in 2016, which was the last milestone (as of writing this chapter), row pattern matching, table function overloading as well as support for JSON were added. 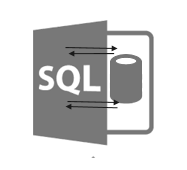 In the diagram, we can see that SQL is essential to query data in the database.

For instance, the SQL coding construct ignores the white space, making it easier to read and format SQL statements for better readability. The basic purpose of SQL is to query data in relational databases. The SQL is based on set theory and declarative programming style. It is not based on imperative programming styles like C, C++ or, JAVA. However, SQL extensions are adopted by various database software providers in the concept of procedural language or T-SQL by following the control-flow structures and constructs.

This article is the primary source of the Stairway to SQL essentials beginner’s series. Please refer to the following list of articles to deep dive into the SQL concepts and more…

“Stairway to SQL essentials” article lists the compressive list of articles. In short, the SQL essentials series is an entity for data engineers, data analytics, data scientists, and data analysts, and database developers. It is an integral part of data models. A quick overview of basics can take you a long way in the database career and make you feel more comfortable using powerful SQL features. This is mainly because the query language deals with data extraction, data transformation, data access, and data analysis, find data patterns out from the raw data.