The requirement of data refactoring is very common and vital in data mining operations. In the previous article SQL string functions for Data Munging (Wrangling), you’ll learn the tips for getting started with SQL string functions, including the substring function for data munging with SQL Server. As we all agree that the data stored in one form sometimes require a transformation, we’ll take a look at some common functions or tasks for changing the case of a string, converting a value into a different type, trimming a value, and replacing a particular string in a field and so on.

After reading this article, you’ll understand more about:

We’ll deep dive on above points in this article.. It allows us to truncate the length of string value that is varchar data-type, when we select data from the input string or tables.

The SQL Server SUBSTRING function syntax is as follows:

Note: The SQL Substring function traversal is always from left to right.

In this section, we are going to deal with some real-world scenarios using SQL string functions. For few demos, the Adventureworks2016 database is used and for some other, SQL data is generated manually. Let’s get our hands dirty and see more action.

Let’s start with a basic SQL query. The following example returns a portion of a character string starting at an initial position 1 and extracts 5 characters from the starting position. The T-SQL SUBSTRING function is very useful when you want to make sure that the string values returned from a query will be restricted to a certain length. 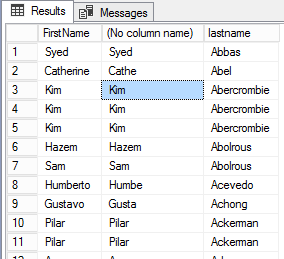 In the following, the 3rd parameter, the length, defined as 15. This will ensure that it doesn’t matter the length of the data stored in the table column itself, the query will only return the first 15 characters. This can be helpful to make sure that the output of query data is formatted according to our expectations or what our application requires. 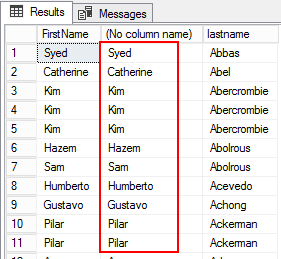 In the following, change the starting position as well as the length parameter, the length, defined as 10. 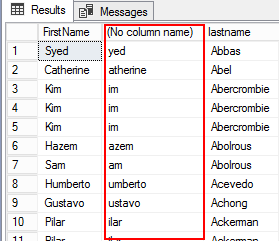 Extending the length to 10 characters will show longer string values. And changing the starting position to 2 will start counting characters from 2 through the string. In this case, substring function extracts 10 characters of the string starting at the second position. The SUBSTRING SQL function is very useful when you want to make sure that the string values returned from a query will be restricted to a certain length.

In the following example, using the ‘firstname’ column, the last two characters are matched with the word ‘on’ using the SQL SUBSTRING function in the where clause.

In the following example, the input string has alpha-numeric characters. Using the SQL Server Substring function, the numeric sub-set of a string from the column col is transformed using CHARINDEX. You can also use the SQL string function PATINDEX to find the initial position and length parameter of the SQL SUBSTRING function. 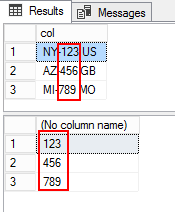 In the following example, you can see that the column col has a data-set and it is a datetime string. Using the SQL Server SUBSTRING function, the input values are truncated using CHARINDEX or PATINDEX function to get the date-time value. And then the derived string is type-casted to DateTime so that it can be used to compare with other DateTime values. In this case, it’s compared against the SQL GETDATE() function.

You can easily find the initial position and convert the data to required data-type (valid values) using the convert or cast functions. Using CHARINDEX, search for the position of ‘/’ of the input column. After finding the position, the value is subtracted by ‘3’ to get an initial value ‘12’ for the SQL SUBSTRING function. Similarly, the search is made to find a position for the character ’,’(comma). In this way, subtracting value with the initial position will yield the length of the string.

In the following example, you can see how the columns are transformed using the SQL Server SUBSTRING function and used as a table for the SQL join statement. 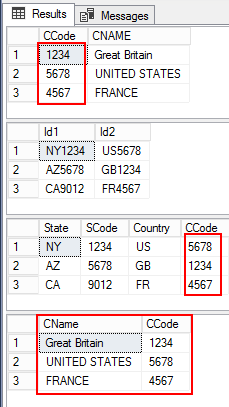 So far, we’ve seen several examples of the SUBSTRING function in SQL Server, the character functions that SQL server makes readily available for use, and how you can use them to manipulate string values in your database and in your result set. In this way it is helpful to make sure that the output of SQL query data is formatted according to the expectations or business requirement.

We also need to understand the importance of the data-set. It is always recommended to thoroughly validate the input value. There are multiple ways to transform the data using the T-SQL SUBSTRING function. In a few cases, it is possible to transform using other SQL string functions. In some cases, volume of data, performance, and SQL Server version defines the options one over the other.

That’s all for now. I hope you enjoyed this article on SQL string functions and the SQL Server SUBSTRING function in particular. Feel free to ask any questions in the comments below.