CRUD operations are foundation operations every database developer and administrator needs to understand. Let’s take a look at how they work with this guide.

CRUD is an acronym that stands for Create, Read, Update, and Delete.

These are the four most basic operations that can be performed with most traditional database systems and they are the backbone for interacting with any database.

The first letter of CRUD, ‘C’, refers to CREATE aka add, insert. In this operation, it is expected to insert a new record using the SQL insert statement. SQL uses INSERT INTO statement to create new records within the table.

Let us create a simple table named Demo for this example.

SQL Insert starts with the keyword INSERT INTO then specify the table name and the columns that we want to insert. The columns go inside of the parentheses and then we specify a VALUES clause.

We put in the table name demo after the insert into command. Now, supply the values to the listed columns id and name in the VALUES clause.

In the following example, the multiple values are listed within in the parenthesis and each list is separated by a comma delimiter

To insert rows from SQL Union clause, follow the below syntax

In the following example, the multiple values are listed using SELECT statement and then these values combined and fed to the table using SQL UNION ALL set operator.

The output lists all the inserted rows from the above samples. 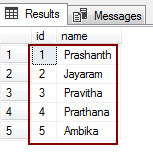 The second letter of CRUD , ‘R’, refers to SELECT (data retrieval) operation. The word ‘read’ retrieves data or record-set from a listed table(s). SQL uses the SELECT command to retrieve the data. When it comes to executing queries, you can use SQL Server Management Studio or SQL Server Data Tools or sqlcmd, based on your preference.

For example, to read related data from the specified table, refer to the below syntax.

The SQL SELECT statement in a vast majority of the time going to contain names of columns from the table(s) that you would like to get data from. Once you have column names, the table name is required in the FROM clause. Now, in a SELECT list, after every column of data, you’re going to need a comma. So you separate each column with a comma, except, no comma after the last column. We’re going to have the SELECT keyword, column name followed by a comma, column name, and the last column name, no comma, FROM clause followed by table name.

The SQL SELECT statement uses a wildcard character (*) or asterisk to populate all the columns of the table(s). It provides a way to not have to list every column table(s). That’s by using the asterisk or ‘*’.

The output lists all the columns of the Address table. The following SQL going to give me all of the columns

Next, the FROM Clause is going to have at least a table or it is possible to have multiple tables using SQL Join.

In the following example, the Product and SalesOrderDetail tables are listed in the FROM Clause of the Select statement.

The third letter of CRUD, ‘U’, refers to Update operation. Using the Update keyword, SQL brings a change to an existing record(s) of the table.

When performing an update, you’ll need to define the target table and the columns that need to update along with the associated values, and you may also need to know which rows need to be updated. In general, you want to limit the number of rows in order to avoid lock escalation and concurrency issues.

The basic syntax for an update:

The UPDATE keyword is followed by the name of the table or view to be updated, and then the set keyword followed by the column name and the value to be set, be it an expression, default, keyword, or null value. If you’re looking to specify which rows are modified using a search condition, the syntax is as follows: Everything is the same as the previous example, only this time you’ll see the “where” clause followed by an expression.

The last letter of the CRUD operation is ‘D’ and it refers to removing a record from a table. SQL uses the SQL DELETE command to delete the record(s) from the table.

For example, to delete related data from the specified table, refer to the below syntax

When writing a DELETE statement, you’ll define the target table and also which rows you need to delete from the table. The syntax in its simplest form is the DELETE keyword followed by the table name. In some case without a WHERE clause in the query deletes ALL existing rows from the table. To apply a condition clause to the SQL DELETE statement, use the WHERE clause followed by the expression(s).

So, thus far, we’ve discussed a lot about CRUD operations. It is a termed as the foundation of SQL operations in any database products. We also discussed how to implement CRUD Operations in SQL Server.

I would recommend reading SQL Insert, SQL Delete, and SQL Update articles which part of CRUD operations. Implementing the Create, Update, Delete, and insert operations are reasonably simple because they are very similar operations.

Thanks so much for taking the time to read this article. I hope you found it simple and valuable. Feel free leave the comment below.