ROW_NUMBER adds a unique incrementing number to the results grid. The order, in which the row numbers are applied, is determined by the ORDER BY expression. Most of the time, one or more columns are specified in the ORDER BY expression, but it’s possible to use more complex expressions or even a sub-query. So, it creates an ever-increasing integral value and it always starts off at 1 and subsequent rows get the next higher value.

You can also use it with a PARTITION BY clause. But when it crosses a partition limit or boundary, it resets the counter and starts from 1. So, the partition may have values 1, 2, 3, and so on and the second partitions again start the counter from 1, 2, 3… and so on, and so forth.

ROW_NUMBER followed by OVER function and then in the parentheses use an ORDER BY clause. It is required to use the ORDER BY clause in order to impose sort of order for the result-set.

The OVER clause defines the window or set of rows that the window function operates on, so it’s really important for you to understand. The possible components of the OVER Clause is ORDER BY and PARTITION BY.

The ORDER BY expression of the OVER Clause is supported when the rows need to be lined up in a certain way for the function to work.

The Partition By clause is optional. On specifying the value, it divides the result set produced by the FROM clause into partitions to which the SQL ROW_NUMBER function is applied. The values specified in the PARTITION clause define the boundaries of the result- set. If PARTITION BY clause is not specified, then the OVER clause operates on the all rows of the result set as a single data-set. This clause may consist of one or more columns, a more complex expression, or even a sub-query.

The Order by clause is a mandatory clause. It determines the sequence and association of the temporary value to the rows of a specified partition. The ORDER BY clause is an expression of the OVER Clause and it determines how the rows need to be lined up in a certain way for the function.

In this section, we’ll take a look at the SQL ROW_NUMBER function. For the entire demo, I’ve used AdventureWorks2016 database.

How to use ROW_NUMBER in SQL Query

The following examples, we’ll see the use of OVER clause.

Let us get the list of all the customers by projecting the columns such as SalesOrderID, OrderDate, SalesOrderNumber, SubTotal, TotalDue and RowNum. The Row_Number function is applied with the order of the CustomerID column. The temporary value starts from 1 assigned based on the order of the CustomerID, and the values are continued till the last rows of the table. The order of CustomerID is not guaranteed because we don’t specify the ORDER BY clause in the query. 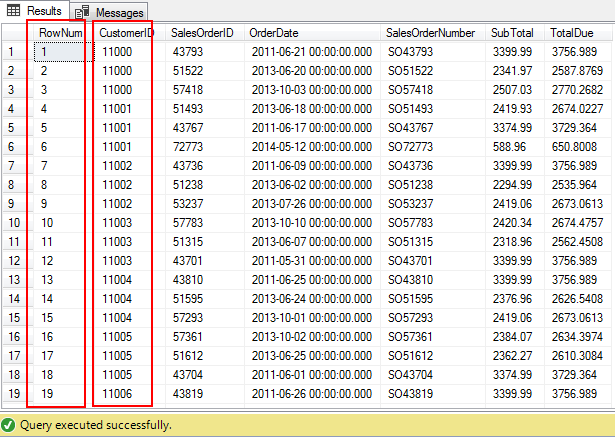 How to use Order by clause 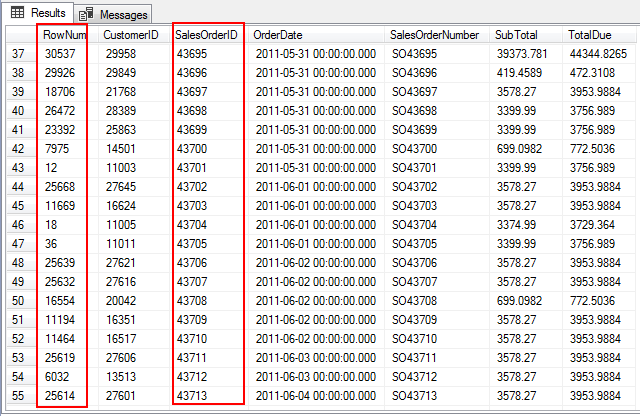 How to use multiple columns with the OVER clause

The following example you can see that we have listed customerID and OrderDate in the ORDER BY clause. This gives the customer details with the most recent order details along with the sequence of numbers assigned to the entire result-set. 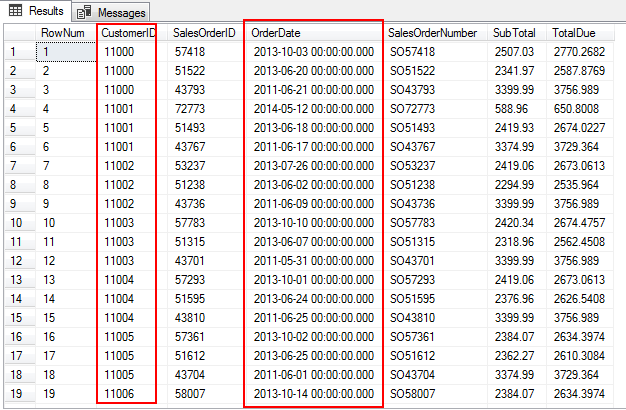 How to use the SQL ROW_NUMBER function with PARTITION

The following example uses PARTITION BY clause on CustomerID and OrderDate fields. In the output, you can see that the customer 11019 has three orders for the month 2014-Jun. In this case, the partition is done on more than one column. 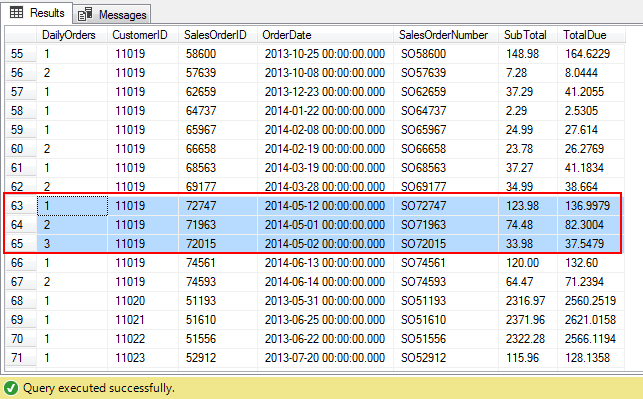 How to return a subset of rows using CTE and ROW_NUMBER

The following example we are going to analyze SalesOrderHeader to display the top five largest orders placed by each customer every month. Using the Month function, the orderDate columns is manipulated to fetch the month part. In this way, the sales corresponding to specific month (OrderDate) along with customer (CustomerID) is partitioned.

To list the five largest orders in each month for each customer, a CTE is used. A window is created on the partition data and it is assigned with the values and then the CTE is being called to fetch the largest orders. 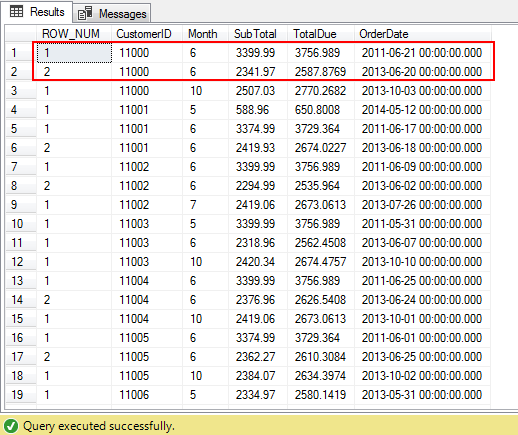 The over clause defines the window that each row sees. Within the over clause, there is a partition by, again it is supported by every window function, followed by the order by clause. That’s all for now…Hope you enjoyed reading the article.