This article is the seventeenth of the SSIS features face-to-face series that aims to compare similar SSIS components to remove any confusion for the data integration developers that use this technology.

SQL Server Integration Services is a set of tools for data integration operations. It is used to facilitate the data warehousing process and to solve complex business problems. Integration Services contains features (tasks and components) that allow developers to extract and transform data from various sources such as XML data files, flat files, and relational data sources and then load the data into one or more destinations. The SSIS tasks and components almost support most of the well-known operations needed in the data integration operations, such as:

Besides all these features, one of the main strengths of Integration Services is that it allows the .NET developers to implement any complex logic and utilize libraries from the robust .NET framework or third parties. This capability is available using two main objects: the SSIS Script task and the SSIS Script Component.

In the following sections, we will briefly explain both objects and illustrate some of the use cases for each one.

Scripting Tasks (Mainly the SSIS Script Task) extends the package functionality by using scripts. It performs functions that are not provided by the standard Integration services tasks.

SSIS Script Task is an effortless task where not much configuration is needed. The initialize a Script task, the user must specify the programming language to be used, the read-only and read-write variables. 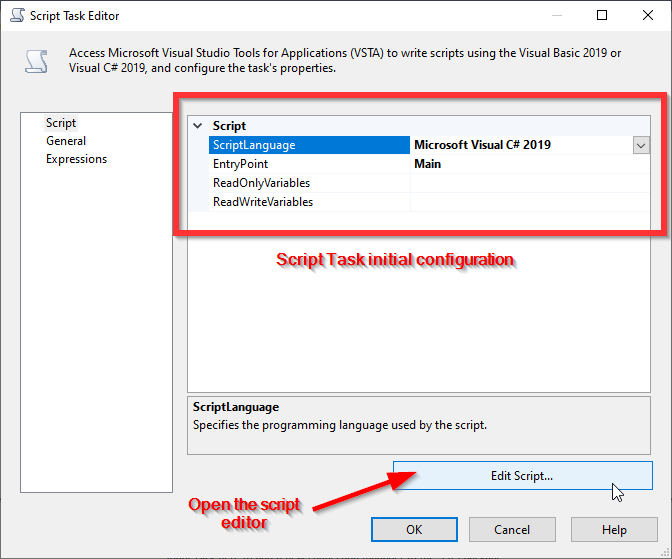 As mentioned in figure 2, we should click on the “Edit Script” button to open the script editor. The Script task uses Microsoft Visual Studio Tools for Applications (VSTA) as the development environment for the script itself.

Side Note: Microsoft Visual Studio Tools for Applications lets you add and run VSTA customizations in applications that are integrated with VSTA

As shown in the image above, there is one class called ScriptMain.cs within the VSTA project. This is the class where we will implement our script. Within the ScriptMain class, we should write our code within the Main function.

Reading and writing to variables

To use a variable within a script, we should ensure that this variable is selected in one of the ReadOnlyVariables and ReadWriteVariables properties, depending on if our code needs to write to the variable.

To read an integer value stored within an SSIS variable we should use the following code:

Besides, to write an integer value within an SSIS variable we should use the following code:

As shown in the examples above, variables are accessed from the “Dts” namespace, which allows the script to interact with the external package objects.

To raise an error, we should use the FireError() method:

To raise a warning, we should use the FireWarning() method:

To raise information, we should use the FireInformation() method:

Some types of connection managers can be used within the SSIS Script Task in order to read some of their configuration. As an example, to read a file path from a File Connection Manager, we can use the following code:

There are several use cases for the use of script tasks, such as listing files, manipulating Excel files, checking for empty files. For more information, Microsoft provides a set of walkthroughs for several examples of using Script Task.

As we mentioned in the introduction, tasks are not intended to run within data flow tasks. They are only used at the control flow level. To extend the data flow tasks functionalities, we should use the SSIS Script Component.

SSIS Script Component configuration is more complex than the SSIS Script task. As a part of the data flow task pipeline, input and output columns metadata must be configured for components. 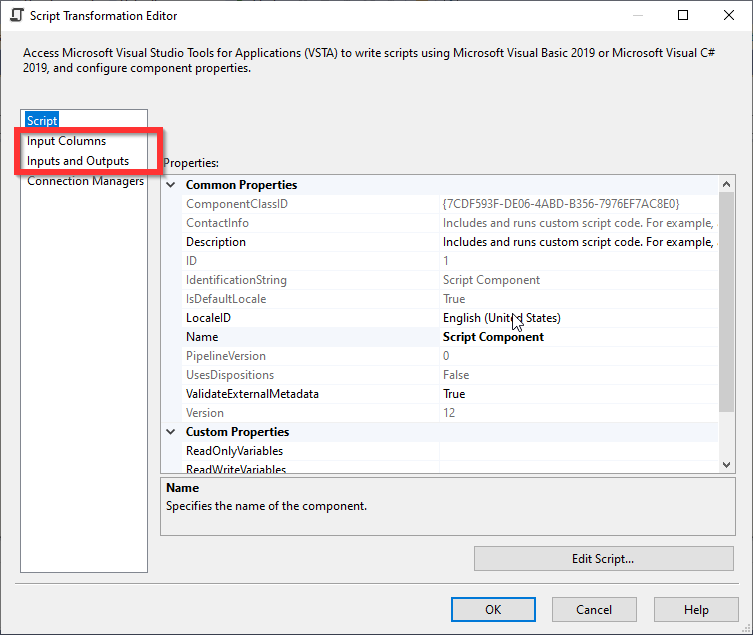 This article will talk briefly about the SSIS Script Component since we already published a detailed article on the SQL Shack website where the component usage and configuration were illustrated.

Reading and writing to variables

Unlike the Script Task, working with variables within a Script Component does not require the “Dts” namespace. The variables will be available as strongly-typed properties of the Variables object:

Besides writing to variables should only do within the PostExecute() method, since the SSIS variables values cannot be modified during the script execution.

In the Microsoft official documentation, they mentioned four purposes to use an SSIS Script Component:

Having published a detailed article about the SSIS Script component, this article focused on the SSIS Script task and its use within our Integration Services packages. Besides, we briefly mentioned the Script Component. Besides, we illustrated some of the use cases for both scripting features.

We should keep in mind that the main difference between Script tasks and Script components is that each one is executable at different levels in the SSIS package and each one of them has its use cases even if their names look similar.