While building and deploying an SSAS OLAP cube, there are two processing orders that you can choose from when you create a process operation:

As mentioned above, when choosing a parallel processing order, tasks are processed in parallel (specific degree of parallelism) but if one task fails all operations are rolled back, even if it was the last one. This may lead to a serious problem when processing a huge OLAP cube that contains lots of partitions.

In a similar case, using a sequential processing order will decrease the processing performance since tasks are processed sequentially which delays delivery.

One of the best workarounds would be processing partitions using a parallel option but in batches; each process operation (batch) will contain a specific number of partitions (tasks). In case that an error occurs during processing phase, only one batch tasks are rolled back.

I proposed this approach for the first time as a solution to a similar problem on stackoverflow.com. Since it addresses a wide audience, I decided to improve it and write it as a separate article.

This article contains a step-by-step guide for implementing this processing logic within a SQL Server Integration Services package.

Also, the OLAP cube must be created and deployed (without processing dimensions and cube).

Creating a package and preparing the environment

The following image shows the Variables Tab in Visual Studio.

Note that, all variables names starting with “p_” can be considered as parameters

After defining variables, we must create an OLE DB connection manager in order to connect to the SQL Server Analysis Service Instance: 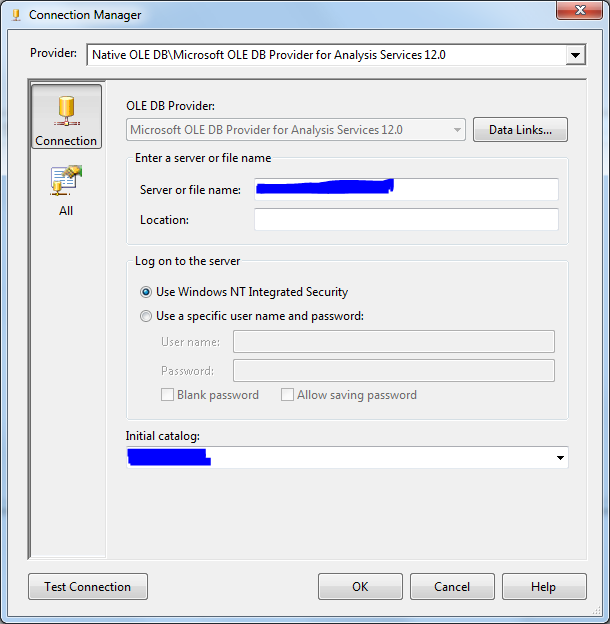 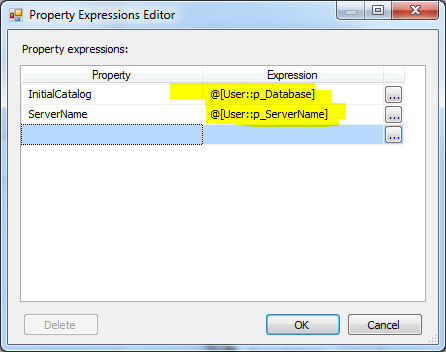 In order to process dimensions, we must use a Sequence Container to isolate the dimension processing within the package. Then we must add a Script Task to prepare the processing commands and an Analysis Services Processing Task to execute them: 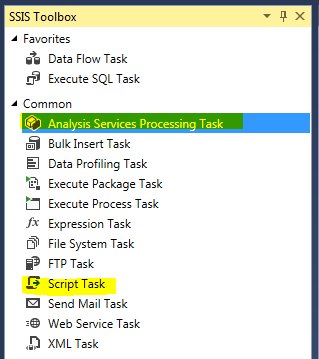 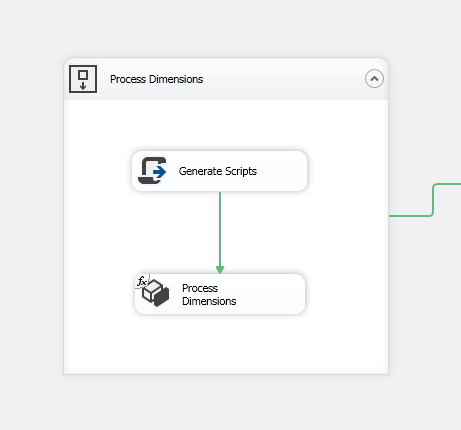 In the Script Task configuration form, we must select @[User::p_Database], @[User::p_MaxParallel] as ReadOnly Variables and @[User::strProcessDimensions] as ReadWrite variable as shown in the image below:

Now, Open the Script editor and use the following code (C#):

The following code is to prepare the XMLA command to process the dimensions. We used AMO libraries to read the SSAS database objects, loop over the dimensions and generate the XMLA query to be used in the Analysis Services Processing Task:

After configuring the Script Task, we have to open the Analysis Services Processing Task and to define any valid task manually, then from the Properties Tab we must open the expressions editor form and set the ProcessingCommands property to @[User::strProcessDimensions] variable as shown in the image below: 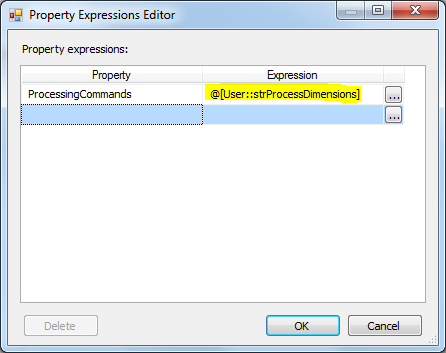 Get the unprocessed partitions count

In order to process partitions in batches, we must first to get the unprocessed partitions count in a measure group. This can be done using a Script Task. Open the Script Task configuration form, and select @[User::p_Cube], @[User::p_Database], @[User::p_MeasureGroup] , @[User::p_ServerName] variables as ReadOnly variables and @[User::intCount] as a ReadWrite variable as shown in the image below:

Open the Script Editor and write the following C# script:

This script reads the SSAS database objects using AMO libraries, and retrieves the number of unprocessed partitions within the OLAP cube Measure group, then stores this value within a variable to be used later.

Finally, we have to create a For loop container to loop over OLAP cube partitions in chunks. In the For Loop Editor, make sure to set the For Loop Properties as following:

Make sure the For Loop Editor form looks like the following image:

Within the For Loop container, add a Script Task to prepare the XMLA commands needed to process the Data and indexes of the partitions, and add two Analysis Services Processing Task to execute these commands as shown in the image below: 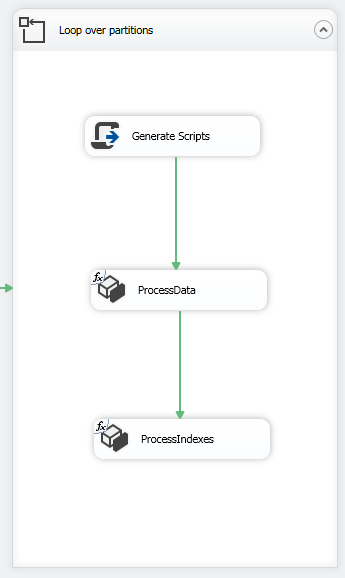 In the script editor, write the following script:

The Script is to prepare the XMLA commands needed to process the partitions Data and Indexes separately. In this Script, we use AMO libraries to read SSAS database objects, loop over OLAP cube partitions and to generate two XMLA query that executes n partitions in parallel (10 in this example) as a single batch (one query for processing data and another one to process indexes). Then we store each XML query within a variable to be used in the SSAS processing task.

Now Open both Analysis Services Processing Task and define any valid task manually (just to validate the task). , then from the Properties Tab we must open the expressions editor form and set the ProcessingCommands property to @[User::strProcessData] variable in the First Task and @[User::strProcessIndexes] in the second one.

The package control flow should looks like the following: 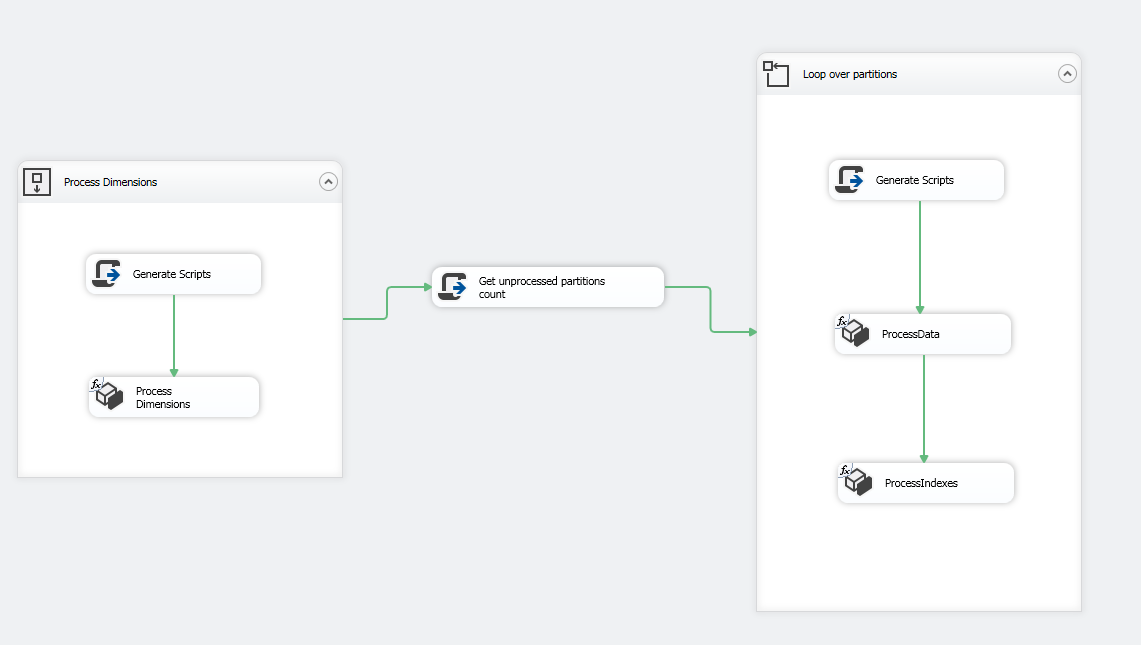 Now, the package is ready. If an error occurs during processing, only the current batch will rollback.

One of the most critical disadvantages of this approach is that it can lead to inconsistent values if the OLAP cube is online and not all partitions are processed. Therefore, it has to be executed in off-hours or on a separate server then deployed to the production server after being processed.

Besides this, many improvements can be done for this process:

In the end, I will provide some external links that contain additional information that can serve to improve this solution: