In this article, I will first give an introduction about SSIS expressions, then I will describe briefly the Expression Task and how to Evaluate a variable as expression. Then I will do a comparison between these two features to illustrate the similarities and differences between them.

This article is the second article in the SSIS feature face to face series which aims to remove any confusion and to illustrate some of the differences between similar features provided by SQL Server Integration Services.

You can check my previous article in this series: SSIS OLE DB Source: SQL Command Vs Table or View

In general, expressions in SSIS is a combination of literals, functions, operators that yields a single data value. An expression can be composed of a single value (“abc”) or a variable (@[User::FilePath]) or a function (GETDATE()), or it can be more complex and contains some conditionals (CASE statement) or some mathematical operations or some string manipulation, as Example:

In SSIS, Expressions can be used within different tasks or components:

To learn more about these expressions in SSIS, you can refer to the official documentation, since it contains very helpful information: Integration Services (SSIS) Expressions

The SSIS Expression builder is the form used to build the SSIS expression, it is composed of 4 parts:

The Expression Task consists of the expression builder form. An expression must have the following form:

Evaluate Variable as an expression

A variable, in general, is a named object that stores a value. They are used to share values between different tasks and components or for configuration purposes. There are many ways to store values in variables: 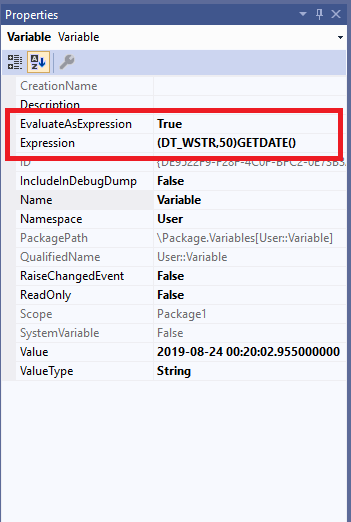 Note that in older SSIS version you have to set the EvaluateAsExpression property manually, but in newer Visual Studio versions when you add an SSIS expression to this property is automatically set to True.

In addition, after setting the expression a function (fx) icon will appear beside of the variable name:

Also, assume that you need to increment a variable value after each iteration of a for each loop container. This would be very easy using an expression Task with a similar expression:

While it cannot be achieved using a variable expression. For more information, you can refer to Display foreach loop iteration number in SSIS.

Another example is if we are iterating over files and each time we want to check if the file name contains a specific word, and we need to execute the next tasks based on this check result. In a similar case we cannot use a variable expression.

There are many helpful links that you can refer to in order to learn more about SSIS expressions: