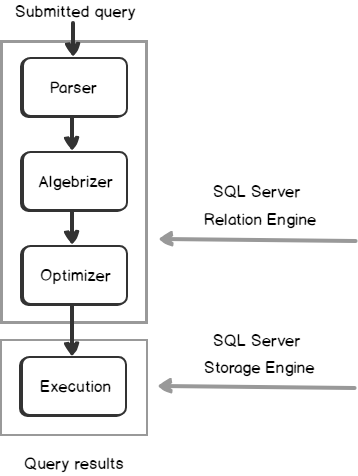 Once the SQL query is submitted, it will be broken into individual parts and checked by the SQL Server Relational Engine to make sure that it is written in a correct way, with no syntax errors for example, under a process that is called Query Parsing. The result of the query parsing process is the parsing tree. The parsing tree is an internal representation of the query that includes all the steps, also known as preemptive operations, that are followed to execute the provided query. After creating the parsing tree for the DML queries, the Algebrizer will take the generated tree and resolve the names of the different database objects referenced by the submitted query against the system catalog, to make sure that these objects exist in the database and that the user has permission to execute the query. The algebrizer will generate a query tree that will be used in the next step, as shown below:

The query processor tree result, from the algebrizer processing, will be input for the Query Optimizerfor SQL Server Execution Plan. The Query Optimizer is functionality that is responsible for modeling the way the SQL Server Relational Engine works, by creating the most efficient plan to execute the provided query, with the lowest SQL Server resources consumption; this is called the Cost-based Execution Plan. The query optimizer will try different execution methods, reading all table rows, using different indexes, joins and orders and compromising between different resources consumption scenarios, until it ends up with the most optimal execution plan with the least possible cost. The total cost of each candidate execution plan is calculated by assigning a weight for each operation, then summing the cost of all these operations together.

SQL Server Execution Plan is a binary representation of the steps that will be followed by the SQL Server Engine to execute the query. In other words, it is the most efficient and least cost roadmap, generated by the SQL Server Query Optimizer, by following different algorithms to execute the submitted query. The plan will be created based on the query processor tree, resulting from the binding step, and the database tables and indexes statistics, that describes the distribution and uniqueness of the data within the database objects, making sure that the optimization level setting is configured as Full. These statistics help the SQL Server Query Optimizer to compare the number of records returned from scanning all the table rows and the records returned from using different indexes, with the cost of each operation. It is very important to keep the statistics of the database tables and indexes up to date, in order to be able to create the most optimal execution plan.

After choosing the most efficient SQL Serve Execution Plan for the newly submitted query, it will be stored in the Plan Cache memory storage, which is a part of SQL Server buffer where query plans are stored, for future reuse, which is more efficient than generating a new plan on each execution. This is due to the fact that, generating the most optimal execution plan is an expensive process. When a new query is submitted, the SQL Server Query Optimizer will search in the plan cache storage for an existing SQL Server Execution Plan for that query to be reused. If it finds no plan that can be reused, the Query Optimizer will go through the previously described process to create a new plan, taking more time to execute that query. Reusing execution plans is very beneficial in the case of stored procedures that are executed frequently with different parameters but are still using the same cached execution plan. Having a large number of ad hoc queries running on the database will prevent the execution plans from being reused and require continuous plans generations, that should be considered when configuring the workload typesetting, as we will discuss in detail in this series.

In specific situations, the SQL Server Query Optimizer prefers to create a basic plan, also known as a Trivial plan, to execute the queries that have no aggregations or complex calculations, rather than spending time and consuming resources in generating the most efficient plan for that query. After that, the execution plan will be scheduled and used by the SQL Server Storage Engine in the Execution stage of the query according to the selected plan, and perform the requested data retrieval, insertion or modification process, as shown below:

The SQL Server Database Administrators depend frequently on SQL Server Execution Plans in troubleshooting the performance of the T-SQL queries and locating the worst performing parts. The Execution Plan also provides DBAs with answers for different questions, such as why the query is slow and taking a long time, consuming large amount of CPU, Memory or I/O resources, or why this index is not used in the query. In addition, the Execution Plan helps the DBAs to write queries in a more efficient way and choose the most suitable and highest recommended index to speeds up data retrieval. To be able to use the execution plan in tuning the performance of the queries, a DBA should have the required skills to create the execution plans, understand its different types and analyze its components and operators.

Now we have a clear image of what is a SQL Server execution plan and how it is generated internally by the SQL Server Query Optimizer. We are ready to jump to the next article of this series to discuss the different types of the execution plans, Actual, Estimated or Live plans and Graphical, Text or XML formats. Prepare for a deep dive into Execution plans!