At the beginning, we will implement a testing table with 3K records to be use it in the examples of this article. This demo table is created and filled with data using the T-SQL script below:

The Aggregate Operator is mainly used to calculate the aggregate expressions in the submitted query, by grouping the values of an aggregated column. The aggregate expressions include the MIN, MAX, COUNT, AVG, SUM operations. Let us run the below SELECT statement that retrieved the top 10 students who got the highest grade. And we will include the Actual SQL Execution Plan of the query. This can be achieved by aggregating the grades of the students to get the maximum grades using the MAX aggregate function. If all information about these top students is required, we should add all these columns in the GROUP BY clause, as shown below:

Another example for the Stream Aggregate operator is the AVG aggregate function order, that will compute the SUM and COUNT of the aggregated column and stored the values in Expr1004 and Expr1005 , in order to evaluate the AVG value, as shown below:

SQL Server Compute Scalar operator is used to calculate a new value from the existing row value by performing a scalar computation operation that results a computed value. These Scalar computations includes conversion or concatenation of the scalar value.

Let us run the below SELECT T-SQL statement to generate a sentence that describes the grade for each student. And we will include the Actual SQL Execution Plan of the query:

You will see from the execution plan, generated after executing the query, that the SQL Server Engine uses the Compute Scalar operator to perform a concatenation for the two specified columns to return a new scalar value, as shown below:

You can see from the previous SQL Execution Plan that the Compute Scalar operator is not an expensive operator, where it only costs 2% of the overall weight of our query, causing a minimal overhead.

SQL Server Concatenation operator takes one or more sets of data in sequence and returns all records from each input data set. One of the most popular examples of this operator is the UNION ALL T-SQL statement. Let us run the below T-SQL statement that combines the result of two SELECT statement using the UNION ALL statement and we will include the Actual Plan of that query:

Then checking the Execution Plan generated after executing the query, you will see that the result returned from the two SELECT statements will be concatenated using the Concatenation operator to generate one result set, as showing below:

The SQL Server Assert operator is used to verify if the inserted values meet the previously defined CHECK or FOREIGN KEY constraints on the table. Assume that we have defined the below constraint on the demo table to ensure that only positive values are inserted into the STD_Grade column:

If you try to perform the below INSERT statement, including the Actual SQL Execution Plan of the query:

You will see from the SQL Execution Plan generated after executing the query, that the SQL Server Engine uses the ASSERT operator to validate if the inserted grade for that student meets the defined CHECK constraint, as shown below: 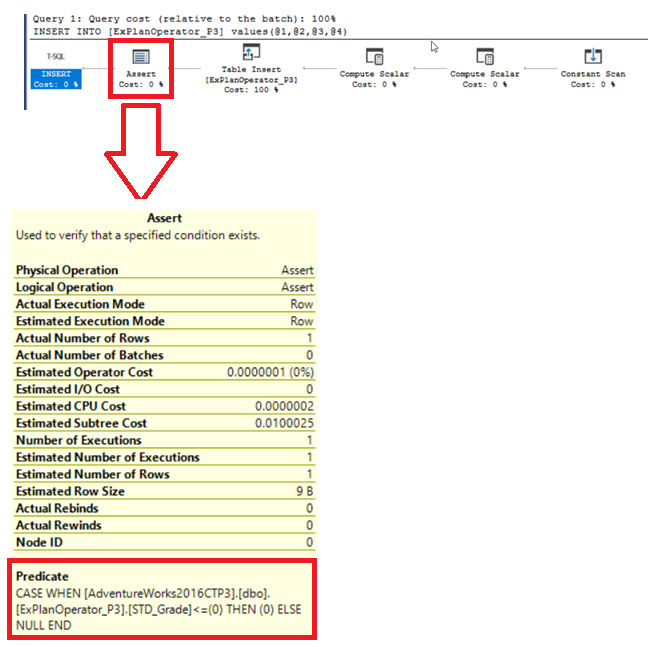 When joining two tables together, the SQL Server Engine divides the tables’ data into equally sized categories called buckets in order to access these data in a quick manner. This data structure is called a Hashing Table. It uses an algorithm to process the data and distribute it within the buckets. This algorithm called a Hashing Function.

Assume that we have created a new table that follows the absence of the students and fill it as below:

After that, we will run the below SELECT statement that joins the base Students table with the Absence table, including the Actual SQL Execution plan of that query:

You will see from the Execution Plan generated after executing the query that, after reading data from the two joined table, the SQL Server Engine uses the Hash Match Join operator, in which it fills the hash table with data from the small, also called Probe table, then process the second large table, also called Build table, depending on the hash table values, to speed up the access to the requested data, as shown below: 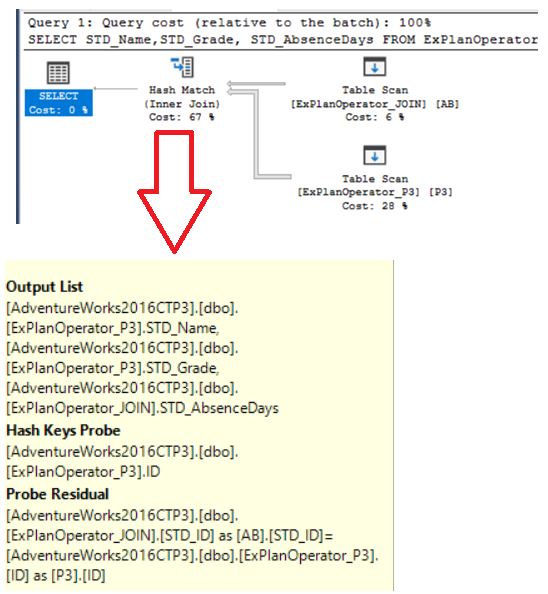 SQL Server Hash Match Aggregate operator is used to process the large tables that are not sorted using an index. It builds a hash table in the memory, calculates a hash value for each record, then scan all other records for that hash key. If the value is not existing in the hash table, it will create a new entry in that hash table. In this way, the SQL Server Engine will guarantee that there is only one record for each group of data.

Let us run the below SELECT statement that returns the number of duplicates for each ID value. And we will include the Actual SQL Execution Plan of the query:

You will see from the SQL Execution plan generated after executing the query that, the SQL Server Engine will use the Hash Match Aggregate operator to perform and speed up the COUNT aggregation operation, as shown below:

Let us run the below query that joins the ExPlanOperator_P3 table with itself, and include the Actual SQL Execution Plan of the query:

You will see from the SQL Execution Plan generated after executing the query that, the SQL Server Engine will scan each input, sort the data based on the ID column, as there is no index created on that table yet, then join the two inputs, that are sorted now based on the JOIN predicate using the fast Merge Join operator, as shown below:

Assume that we have created the below two indexes on our demo tables, as shown below:

Then run the below SELECT statement that returns the students who missed the classes more than days, by joining the two demo tables together, including the Actual SQL Execution Plan of the query:

From the SQL Execution Plan, generated after executing the query, you can see that the SQL Server Engine joins the two tables using the Nested Loops Join operator, but performing an Index Scan operation for the outer input one time then performing an Index Seek operation 100 times for the inner input, as shown below: 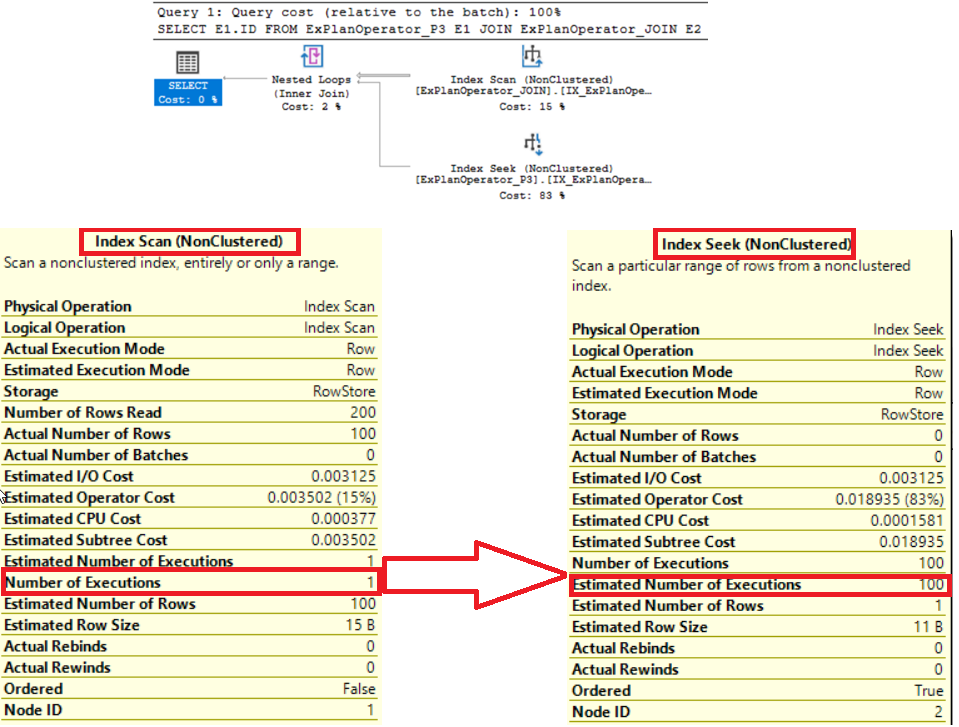 Stay tuned for the next article in which we will discuss the fourth set of the SQL Server Execution Plan operators.