An estimated execution plan is a SQL Server query plan that is generated without actually running the query (or stored procedure) the plan is created for. It’s based on estimation of expected behavior. It’s useful for analyzing how a query would behave, without actually running it. This is very useful for testing purposes in environments where performance should not be affected by running actual code (e.g. running a SELECT statement with complex joins against huge tables), or when running code is not possible due to data changes it makes (e.g. executing an UPDATE). Its downside is that it might be inaccurate in some scenarios

An actual execution plan is the SQL Server query plan that is generated after a query was executed. It’s more reliable, as it’s based on the actual execution, not estimates. It also provides more information and statistics, therefore it’s much useful in troubleshooting

If multiple SQL queries are executed, their plans will be listed in the same tab, one below another separated as statements. 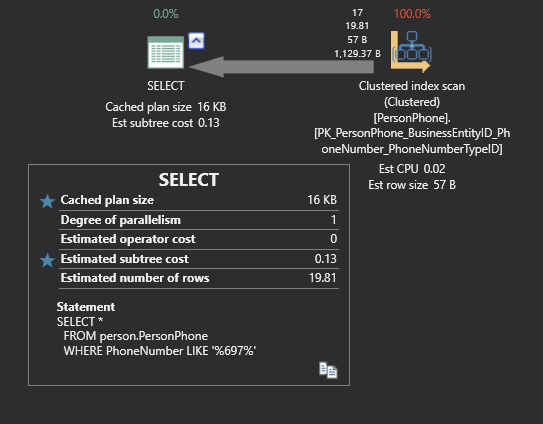 SQL Server execution plans can be saved as SQL or sqlplan files for later analysis.

The steps are similar for using the Estimated execution Plan option, except the query doesn’t have to be executed.

SQL Server query plans can also be shown in Query Editor using some of the following options:

The SHOWPLAN option in SQL Server Management Studio has to be set using T-SQL and it shows the estimated execution plan. This is the same plan as shown when the Estimated Execution Plan option is selected, when the query is not actually executed

Use the query cache

As mentioned in the SQL Server query execution plans – Basics article, query plans in SQL Server are saved in the query plan cache, so they can be reused later in order to execute queries faster. One of the options to see query plans is to query the content of the plan cache using Dynamic Management Views (DMVs)

The sys.dm_exec_cached_plans view shows one row for every query plan stored in the plan cache. The view shows query text, memory used, and how many times the plan was reused

To see the plans for ad hoc queries cached in the plan cache:

To open a plan, click the link in the query_plan results column and the plan will be shown in the new Query window

Use the STATISTICS and SHOWPLAN options

The STATISTICS XML option shows the same query plan as shown when the Include Actual Execution Plan option is selected. Unlike with the SHOWPLAN options that don’t actually execute the queries, the STATISTICS options execute it and show the results

Note that besides the link to the query plan, the query results are also shown

To turn the option off, execute:

Other useful options are:

SHOWPLAN_XML – doesn’t execute the query, so no results are shown. Shows the link the same as the STATISTICS XML option

SHOWPLAN_TEXT – doesn’t execute the query, shows the text of the estimated query plan

SHOWPLAN_ALL – doesn’t execute the query, shows the text of the estimated query plan along with the cost estimation

STATISTICS PROFILE – executes the query, shows the results and text of the actual query plan

This method is not recommended due to several downsides. SQL Server Profiler adds some overhead that affects query performance. Another reason is that filtering the events and finding the specific one among thousands of records in not easy in SQL Server Profiler

In this article, we showed how to open a SQL Server query execution plan using various methods. In the next article, we will show how to read the plans, what the objects presented with icons represent, and how to use these plans in performance analysis and troubleshooting