You can create several user-defined objects in a database. One of these is definitely user-defined functions. When used as intended, they are a very powerful tool in databases. In today’s article, we’ll see how to create, change and remove them from the database, as well as how to use them. So, let’s dive into the matter.

As mentioned in the introduction, there are different kinds of objects you could create in the database. Besides tables and keys, other well-known objects are procedures, triggers, and views. And, of course, user-defined functions, which are today’s topic. The main idea behind objects is to have them stored in the database and avoid writing the same code over and over again. Also, you can control what is the input and define the structure/type of output. And last, but not least, you can define permissions to decide who’ll be able to use them and in what way he’ll be able to do it.

We’ll describe all of them in the upcoming articles, but in this article, we’ll focus only on the user-defined functions.

Let’s remind ourselves of the model we’re using in this article series.

This time we won’t use this model so extensively as before, because of the nature of the functions we’ll declare, but also because of the complexity of queries we’ll use (they’ll be much simpler). While our queries will be simple, there is no reason why you wouldn’t use user-defined functions in much more complex queries as well.

Whenever you’re working with database objects, you’ll use these commands – CREATE (new), ALTER (existing), and DROP (existing). The syntax goes something like CREATE/ALTER/DROP <type of the database object> <object name> AS. This differs slightly regarding the object type and also if you are creating, modifying or deleting the object.

For user-defined functions, these syntaxes look as follows:

Most things should be pretty obvious here. The function:

ALTER is very similar to CREATE and it simply modifies the existing function. To delete a function, we’ll use statement DROP FUNCTION and the name of that function.

It’s time that we create our first and pretty simple user-defined function. We want to list all cities and write down are they east or west when compared to London (longitude = 0). Cities east of London will have positive city.long values, while those west of London will have this value negative.

We’ll use the following code to create the function:

The first thing we should notice, after running this command, is that our function is now visible when we expand “Scalar valued functions” in the “Object Explorer” (for the database where we’ve created this function).

Our function takes a number as a parameter. The return value must be of the CHAR(4) type. The initial value (variable @return_value) is initially set to ‘same’. If the parameter (variable @long) is greater than 0, we’re ‘east’ from London, and if it’s less than 0, we’re ‘west’ of London. Notice that, in case of @long was 0, none of these two Ifs will change the value, so it will hold the initial value -> ‘same’.

This is really a simple function, but it’s a nice way to show what functions can do.

Let’s now see how we can use this function inside a query. To achieve that, we’ll use the following simple select statement:

The result is shown in the picture below.

You can easily notice that we’ve called function 3 times in the same select, and the output was as expected. This was actually testing if our function is working as expected.

Now, we’ll use this function in the more complex query: 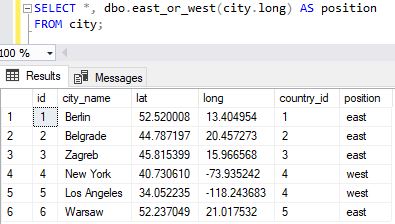 The important thing to notice here is that we’ve used function as a “column” in our select query. We’ve passed parameter (city.long of the related row) and the function returned a result of the calculation. This is great because we’ve avoided writing complex calculations in a select query, and also, we can reuse this function later in any other query.

A User-Defined Function Returning the Table

Let’s now examine a more complex function. This time we want to pass long as an argument and we’ll expect that function returns a table of all cities ‘east’ from the given parameter.

You can also see that function listed in the “Table-valued Functions” section in the “Object Explorer”. 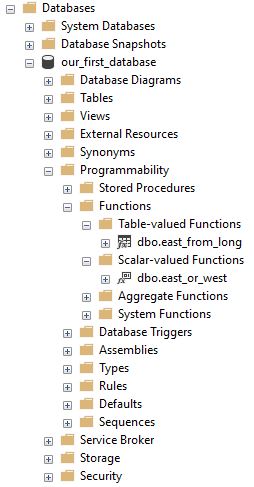 Now, we’ll use the function. 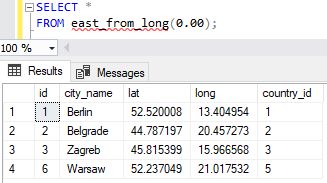 You can notice that we’ve used the function as a table (it’s a table-valued function, so this sounds pretty logical 🙂 ).

An idea to implement

I won’t do it now, but just throwing out an idea. This is something that’s doable in other ways (GROUP_CONCAT or simulating it), but the function and loops would really help here a lot. So, the thing we want to do is following – Write down a function that shall, for a given city.id, find all cities east and west from that city. The function shall return a string like “east: <names of all cities east from the given city>; west: <names of all cities west from the given city>”. You should use a loop in this function. You can Google it or wait for our article related to loops in SQL Server.

User-defined functions are a very powerful tool. You should use them when you’ll have a calculation you’ll repeat throughout your database. E.g. calculating the tax on different products based on predefined rules (that can change during the time), is one good candidate for the function. You put all rules there, pass parameters to the function, and as a result get the desired number. But, as with everything else, do not overuse them.