SQL Triggers are another powerful database object we have at our disposal. In previous articles, we’ve covered user-defined functions, user-defined procedures, and SQL Views. Today we’ll talk about SQL triggers and how to use them to achieve the desired behavior.

Before we move to the topic of this article, let’s take a quick look at the model we’re using in this article but also throughout this series.

In this article, we’ll focus on DML (data manipulation language) triggers and show how they function when we make changes in a single table.

What Are SQL Triggers?

In SQL Server, triggers are database objects, actually, a special kind of stored procedure, which “reacts” to certain actions we make in the database. The main idea behind triggers is that they always perform an action in case some event happens. If we’re talking about DML triggers, these changes shall be changes in our data. Let’s examine a few interesting situations:

From examples, you can notice that DML triggers are actions related to the SQL commands defined in these triggers. Since they are similar to stored procedures, you can test values using the IF statement, etc. This provides a lot of flexibility.

The good reason to use DML SQL triggers is the case when you want to assure that a certain control shall be performed before or after the defined statement on the defined table. This could be the case when your code is all over the place, e.g. database is used by different applications, code is written directly in applications and you don’t have it well-documented.

In SQL Server, we have 3 groups of triggers:

In this article, we’ll focus on DML triggers, because they are most commonly used. We’ll cover the remaining two trigger types in the upcoming articles of this series.

The simplified SQL syntax to define the trigger is as follows.

Most of the syntax should be self-explanatory. The main idea is to define:

With this in mind, we can easily write triggers that will:

If you want to drop a trigger, you’ll use:

First, we’ll create a simple SQL trigger that shall perform check before the INSERT statement.

We can see our trigger in the Object Explorer, when we expand the data for the related table (country).

I want to emphasize a few things here:

Let’s now run an INSERT INTO command and see what happens in the database. We’ll run the following statements:

The result is in the picture below. 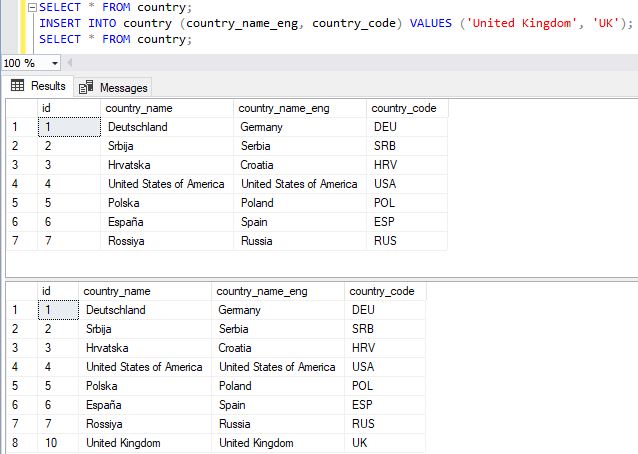 You can easily notice that the row with id = 10, had been inserted. We haven’t specified the country_name, but the trigger did its’ job and filled that value with country_name_eng.

Now let’s create a trigger that shall fire upon the DELETE statement on the country table.

For this trigger, it’s worth to emphasize the following:

Running the below statement went without an error because the country with id = 6 had no related records.

If we run this statement we’ll see a custom error message, as shown in the picture below.

Such a message is not only descriptive, but allows us to treat this error nicely and show a more meaningful message to the end-user.

I will leave this one to you, as a practice. So try to write down the UPDATE trigger. The important thing you should know is that in the update trigger you can use both – INSERTED (after update) and DELETED (before update) records. In almost all cases, you’ll need to use both of them.

When to Use SQL Triggers?

Still, that is not always the option. If you inherited a system or you simply don’t want to put all the logic in the stored procedures, then triggers could a solution for many problems you might have.