If you want to get something meaningful out of data, you’ll almost always need to join multiple tables. In this article, we’ll show how to do that using different types of joins. To achieve that, we’ll combine INNER JOINs and LEFT JOINs. So, let’s start.

In the picture below you can see out existing model. It consists of 6 tables and we’ve already, more or less, described it in the previous articles.

Still, even without describing, if the database is modeled and presented in a good manner (choosing names wisely, using naming convention, following the same rules throughout the whole model, lines/relations in schema do not overlap more than needed), you should be able to conclude where you can find the data you need. This is crucial because before you join multiple tables, you need to identify these tables first.

We’ll talk about naming convention and the advice on how to think when you’re writing SQL queries, later in this series. So far, let’s live with the fact that this model is pretty simple and we can do it fairly easily.

What do we know so far?

In this series, we’ve covered:

We’ll use the knowledge from both these articles and combine these to write more complex SELECT statements that will join multiple tables.

The first example we’ll analyze is how to retrieve data from multiple tables using only INNER JOINs. For each example, we’ll go with the definition of the problem we must solve and the query that does the job. So, let’s start with the first problem.

#1 We need to list all calls with their start time and end time. For each call, we want to display what was the outcome as well the first and the last name of the employee who made that call. We’ll sort our calls by start time ascending.

Before we write the query, we’ll identify the tables we need to use. To do that, we need to determine which tables contain the data we need and include them. Also, we should include all tables along the way between these tables – tables that don’t contain data needed but serve as a relation between tables that do (that is not the case here).

The query that does the job is given below:

The query result is given below:

There are a few things I would like to point out here:

Since all calls had related employee and call outcome, we would get the same result if we’ve used LEFT JOIN instead of the INNER JOIN.

Writing queries that use LEFT JOINs doesn’t differ a lot when compared to writing queries using INNER JOINs. The result would, of course, be different (at least in cases when some records don’t have a pair in other tables).

This is the problem we want to solve.

The tables containing data we need are in the picture below:

First, let’s quickly check what is the contents of these 3 tables. 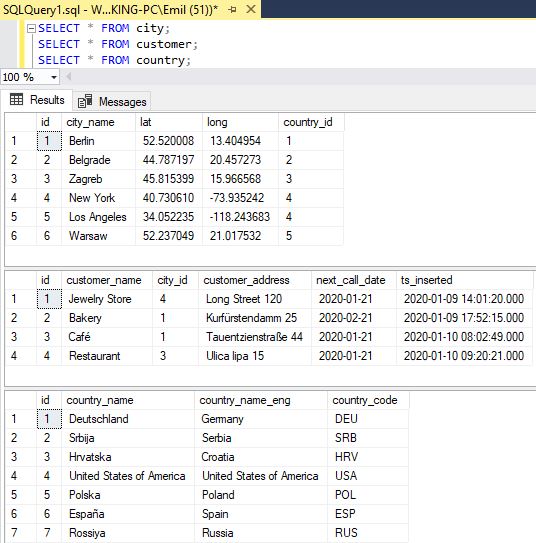 We can notice two important things:

The query result is shown in the picture below:

To do that, we’ll use LEFT JOIN. We’ll simply replace all “INNER” with “LEFT” so our query is as follows:

The result is shown in the picture below:

While the order of JOINs in INNER JOIN isn’t important, the same doesn’t stand for the LEFT JOIN. When we use LEFT JOIN in order to join multiple tables, it’s important to remember that this join will include all rows from the table on the LEFT side of the JOIN. Let’s rearrange the previous query:

At first, you could easily say, that this query and the previous one are the same (this is true when using INNER JOIN). We’ve used the same tables, LEFT JOINs, and the same join conditions. Let’s take a look at the output first:

So, what happened here? Why do we have 4 rows (same 4 we had when we’ve used INNER JOIN)?

The answer is simple and it’s related to how LEFT JOIN works. It takes the first table (customer) and joins all its rows (4 of them) to the next table (city). The result of this is 4 rows because the customer could belong to only 1 city. Then we join these 4 rows to the next table (country), and again we have 4 rows because the city could belong to only 1 country.

The reason why we wouldn’t join these 3 tables in this way is given by the text of the example #2. The query is written in such manner it returns 4 rows would be the answer to the following: Return names of all customers as well as cities and countries they are located in. Return even customers without related cities and countries.

This is also possible. Let’s again go with an example.

#3 Return the list of all countries and cities that have pair (exclude countries which are not referenced by any city). For such pairs return all customers. Return even pairs not having a single customer.

The query that does the job is:

The result of the query is given in the picture below:

You can easily notice that we don’t have countries without any related city (these were Spain & Russia). The INNER JOIN eliminated these rows. Still, we do have cites without any customers (Belgrade, Los Angeles & Warsaw). This is the result of the fact we used LEFT JOIN between tables city and customer.

When you need to join multiple tables, you have INNER & LEFT JOIN on your disposal (RIGHT JOIN is rarely used and can be easily replaced by LEFT JOIN). Which join you’ll use depends directly on the task you need to solve and you’ll get the feeling along the way. In upcoming articles, we’ll discuss how to think and organize yourself when you need to write more complex queries.