SQL has many cool features and aggregate functions are definitely one of these features, actually functions. While they are not specific to SQL, they are used often. They are part of the SELECT statement, and this allows us to have all benefits of SELECT (joining tables, filtering only rows and columns we need), combined with the power of these functions.

Before we start talking about aggregate functions, we’ll shortly comment on the data model we’ll be using.

This is the same model we’ve been using in a few past articles. I won’t go into details, but rather mention that all 6 tables in the model contain data. Some of the records in tables are referenced in others, while some are not. E.g. we have countries without any related city, and we have cities without any related customers. We’ll comment on this in the article where it will be important.

We’ll, of course, start with the simplest possible aggregate function. But, before we do it, let’s check the contents of the two tables we’ll use throughout this article. There are tables country and city. We’ll use the following statements:

You can see the result in the picture below: 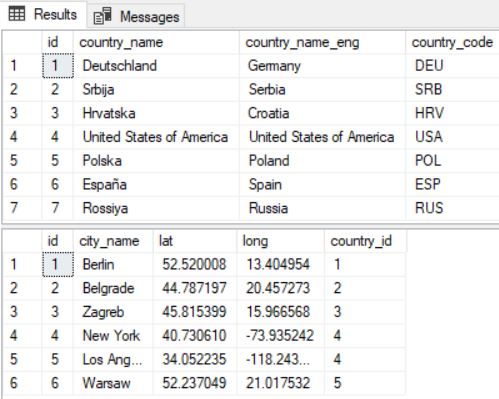 The only thing I would like to point out is that the country table has 7 rows and that the city table has 6 rows. Now, let’s examine the following queries and their result: 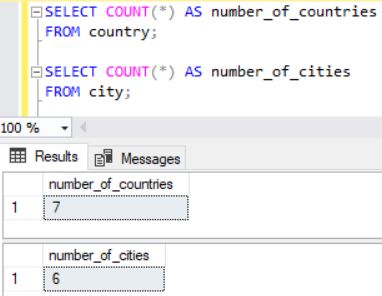 We can notice that for each query we got one row as a result, and the number returned represents the number of rows in each of these two tables. That’s what aggregate function COUNT does. It takes what the query without COUNT would return, and then returns the number of rows in that result. One more important thing you should be aware of is that only COUNT can be used with “*”. All other functions shall require an attribute (or formula) between brackets. We’ll see that later.

While the first query is not needed, I’ve used it to show what it will return. I did that because this is what the second query counts. When two tables are joined, you can think of that result as of some intermediate table that can be used as any other tables (e.g. for calculations using aggregate functions, in subqueries).

Also, we should notice, one more thing. We’ve used INNER JOIN while joining tables country and city. This will eliminate countries without any cities from the result (you can check why here). Now we’ll run 3 more queries where tables are joined using LEFT JOIN:

We can notice a few things:

Now it’s time that we mention all T-SQL aggregate functions. The most commonly used are:

These 5 are most commonly used and they are standardized so you’ll need them not only in SQL Server but also in other DBMSs. The remaining aggregate functions are:

While all aggregate functions could be used without the GROUP BY clause, the whole point is to use the GROUP BY clause. That clause serves as the place where you’ll define the condition on how to create a group. When the group is created, you’ll calculate aggregated values.

Now, let’s take a look at how these functions work on a single table. They are rarely used this way, but it’s good to see it, at least for educational purposes:

The query returned aggregated value for all cities. While these values don’t have any practical use, this shows the power of aggregate functions.

Now we’ll do something smarter. We’ll use these functions in a way much closer than what you could expect in real-life situations: 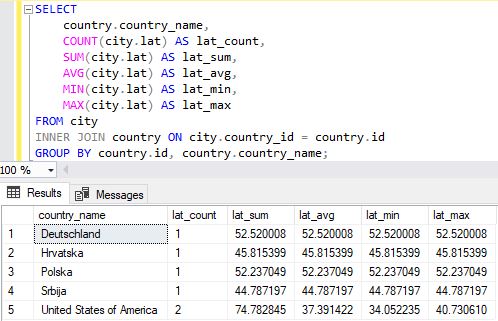 This is a much “smarter” query than the previous one. It returned the list of all countries, with a number of cities in them, as well as SUM, AVG, MIN, and MAX of their lat values.

Please notice that we’ve used the GROUP BY clause. By placing country.id and country. country_name, we’ve defined a group. All cities belonging to the same country will be in the same group. After the group is created, aggregated values are calculated.

Aggregate functions are a very powerful tool in databases. They serve the same purpose as their equivalents in MS Excel, but the magic is that you can query data and apply functions in the same statement. Today, we’ve seen basic examples. Later in this series, we’ll use them to solve more complicated problems (with more complicated queries), so stay tuned.