Loops are one of the most basic, still very powerful concepts in programming – the same stands for SQL Server loops. Today, we’ll give a brief info on how they function and introduce more complex concepts in upcoming articles of this series.

We won’t use any data model in this article. Although this might sound weird (well, we’re working with a database, and there is no data!?), you’ll get the point. Since this is the intro article on SQL Server loops, we’ll cover basic concepts that you could combine with data to get the desired result.

But, first of all – let’s see what loops are. Loops are the programming concept that enables us to write a few lines of code and repeat them until the loop condition holds.

Almost all programming languages implement them, and we’ll usually meet these 3 types of loops:

For us, the most important facts are:

IF … ELSE IF and PRINT

Before we move to loops, we’ll present two SQL statements/commands – IF (IF … ELSE) and PRINT.

IF statement is pretty simple, right after the IF keyword, you’ll put the condition. If that condition evaluates, the block of statements shall execute. If there is nothing else, that’s it.

You could also add ELSE to the IF statement, and this will result in the following – if the original condition wasn’t true, the code in the ELSE part should execute.

But before that – the PRINT command. PRINT simply prints the text placed after that command. That is inside quotes, but you could also concatenate strings and use variables.

With the set of commands above, we’ve:

While this example is pretty simple (and it is obvious which number is greater), it’s a nice and simple way to demonstrate how IF … ELSE IF and PRINT work in SQL Server.

Now we’ll use statements from the previous example to show one more thing.

You can notice that we’ve placed the IF statement inside another IF statement. This is called nested IF. You could avoid it by using logical operators in the 1st IF statement, but this way, the code is more readable).

Similarly to the previous example, this code is not very “smart” but used to show the concept of nested IF.

Now we’re ready to move to SQL Server loops. We have 1 loop at our disposal, and that is the WHILE loop. You might think why we don’t have others too, and the answer is that the WHILE loop will do the job. First, we’ll take a look at its syntax.

WHILE {condition holds}
BEGIN
{…do something…}
END;

As you could easily conclude – while the loop conditions are true, we’ll execute all statements in the BEGIN … END block. Since we’re talking about SQL Server loops, we have all SQL statements at our disposal, and we can use them in the WHILE loop as we like.

Let’s now take a look at the first example of the WHILE loop. 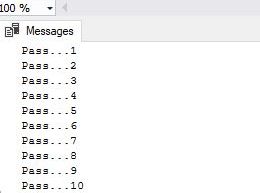 We’ve declared the variable @i and set it to 1. If the current value of the variable is <= 10, we’ll enter the loop body and execute statements. Each time we enter the body, we’ll increase @i by 1. That way, the value of variable @i will become 10 at some point, and that will prevent the loop from running over and over again.

Two keywords – BREAK and CONTINUE, are present in most programming languages. Same stands for SQL Server loops. The idea is the following: 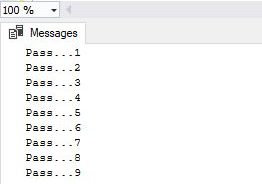 You can notice that placing a BREAK in the loop resulted that we exited the loop in the 9th pass. 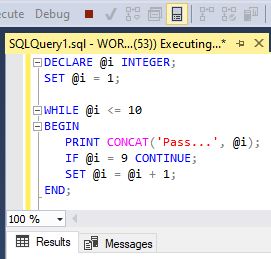 The code above results with an infinite loop. The reason for that is that when @i becomes 9, we’ll CONTINUE the loop, and @i shall never have the value 10. Since this is an infinite loop, it will just spend resources on the server without doing anything. We can terminate the query by clicking on the “stop” button.

After clicking on the stop button, you can notice that the loop did something, printed numbers 1 to 8, and number 9 as many times as it happened before we canceled the query.

So far, we’ve covered the basics and how SQL Server loops function and how we combine statements like IF and PRINT with loops. Now we’ll use loops to do something useful. We want to print all dates between the two given dates.

We’ve declared two variables, assigned date values to them. The only difference is that we’re using variable @loop_date. While we could do it without this variable, it’s a good practice to keep the original values (in our case, these are @date_start and @date_end) unchanged. In each step of the loop, we’ve printed the date and increased the “counter” by 1 day. This is useful, but still, we can’t use these dates in the query.

To do that, we’ll store values in the temporary table. 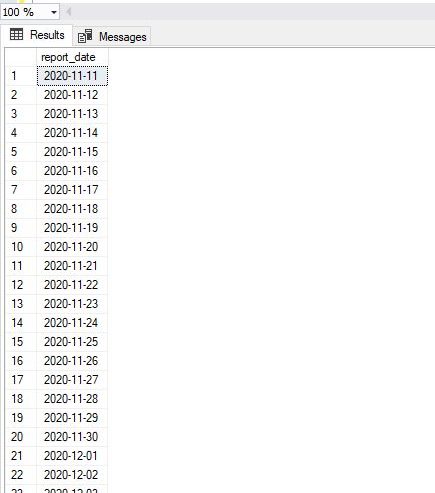 After the loop, we’ve selected from the temporary table as well dropped it.

SQL Server loops are extremely powerful if you use them as they were intended to be used. Today, we’ve just scratched the surface, but all-important concepts were explained. In the upcoming article, we’ll show more complex examples and combine loops with other database objects.