A relational database system uses SQL as the language for querying and maintaining databases. To see the data of two or more tables together, we need to join the tables; the joining can be further categorized into INNER JOIN, LEFT OUTER JOIN, RIGHT OUTER JOIN, FULL OUTER JOIN, and CROSS JOIN. All these types of joins that we use are actually based on the requirement of the users.

Optimizer which is responsible for fulfilling the user requests optimally.

We need not to worry how things actually happen in the SQL Server, but it’s always good to know what’s happening behind the curtain sometimes so that we can figure out why a query is running slow.

However, in the Execution plan, there are many iterators for different operations, but in this article, we will learn one iterator only, that is, the Nested Loop Join. It is a physical join type iterator. Whenever you join a table to another table logically, the Query Optimizer can choose one of the three physical join iterators based on some cost based decision, these are Hash Match, Nested Loop Join and Merge Join. This article only focuses on the Nested Loop Join, and hence let us quickly move to the joining part.

In relational databases, a JOIN is the mechanism which we use to combine the data set of two or more tables, and a Nested Loop Join is the simplest physical implementation of joining two tables. For example, how would you match the following data manually, if you have these two tables given below:

If you want to see a student’s name, address, present and attendance date in a new spreadsheet, you can only use one row at a time of a table. So, how would you do that?

In all probability, some of us will start with rollnumber 1 of the studentinfo table

The result set will look something like this after filling the data of roll number 1:

Then we will repeat the same process for roll number 2 and roll number 3 after completing it all; your final result set will look somewhat like this:

If we try to convert what we did above in the pseudocode, then it will be like this:

Now see this pseudocode about Nested Loop Join from Wikipedia:

And here is something from Craig Freedman’s blog about Nested Loop Join:

Now let us try to understand the Nested Loop Join with a few examples, and for that, we need to build at least two tables. In the example given below, we will use tables DBO.T1 and DBO.T2.

There are four columns in the DBO.T1 table: primarykey column, keycol column, searchcol column and somedata column. The DBO.T2 table is a replica of the DBO.T1 table, which consists only 300 rows, and it has one additional groupcol column which has repetitive integer values. Find the sample table structure and data in the following image: 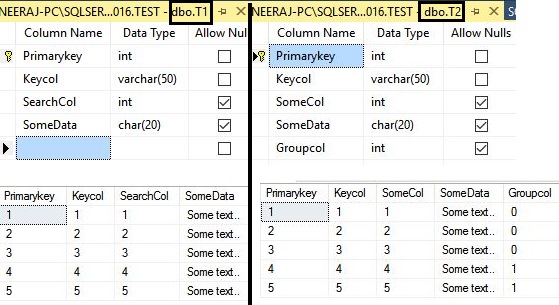 You can find the sample table script below in the article. Now we have an idea about tables, so we can start with the examples of Nested Loop Join:

Look at the execution plan of the above query; you can see on the top right-hand side that there is a table named T1. In the execution plan, the table is displayed as tablename.indexname (if indexed), so here it is showing as T1.pk_T1; this is the outer table and the other one is the inner table.

At the bottom of right side of an execution plan, there is an Index Spool (Eagar Spool), which is actually a temporary index on the groupcol column.

Let’s now focus on the explanation, a bit more closely, this time. As usual, data flow starts from the top outer table, but this time our DBO.T2 table is the outer table, after fetching all the data from the top DBO.T2 table Distinct Sort iterator group all the data and passes the first value to the Nested Loop Join. On the other hand, execution starts from the inner side of DBO.T2 table, after concatenation of comma “,” (it is labeled as [Expr1002] column) this column is indexed, which is visible in the execution plan as Index spool, and after that all executions perform with this newly created index only. This can be confirmed by looking at the number of executions in the iterator’s properties. Just have a look at the execution plan above, inner side of the DBO.T2 table executed just once and index spool executed 76 times.

Costing details for Nested Loop Join for educational purpose only

The cost of the execution plan, whether its CPU, IO or any other costs do not reflect the actual cost of your hardware; these numeric values are just units of measurement used by the Query Optimizer to compare the execution plans as a whole. So a natural question arises: where do these costs come from?

The cost values were actually the number of seconds for which, that the query was expected to run on the engineer’s machine (“Nick’s machine”). Nick was the part of the Query Optimizer team and he was responsible for calculating query’s costs so he decided that if a query runs for 1 second on his own PC the cost will be 1 unit.

As this is a part of internal implementations, these costs may vary from version to version of the SQL Server. SQL Server’s Query Optimizer is a cost based optimizer, If a full cost-based optimization is performed, it creates multiple execution plans for the expressed query by the user and chooses the one which has the lowest overall cost. Each iterator in the execution plan has some cost which is roughly an addition of CPU, IO and some other variable information like histogram, data pages and statistics information etc.

The Nested Loop Join iterator does not have any initialization cost. Rather, it has got only cost per row and it does not require additional memory (except Batch sort or Implicit sort) like other join types such as hash join, which requires building a hash table in the memory and merge join requires to sort the inputs if not indexed on joining column(s).

Nested Loop Join costing is not documented, so we can only assume and this might change in the future.*

For the tests, we will create 2 basic tables with integer values, and then join those tables and finally try to identify CPU cost with different row counts, data pages count and with or without parallelism. With my quick testing, I came up with a rough formula for the CPU cost only, as there is no IO cost for the Nested Loop Join but operator costs may vary with other factors.

Below is the rough formula for CPU cost of Nested Loop Join:

*Cpu_for_query = Available CPU for the query at the runtime.

The interesting part about this test is NL’s CPU cost doesn’t change with the data types, data pages or with the table’s indexes. The testing is conducted with INT data type, but I tested it with CHAR, VARCHAR, NVARCHAR, NCHAR, DATETIME and CPU costing doesn’t change.

Unfortunately, my machine has only 4 virtual CPU available, so the CPU cost of the nested loop join won’t come down after DOP 2 as per the formula.

Below are the tests that I had conducted to get the above formula.**

Result and script below:


This article is just an introduction to Nested Loop Join. It offers a lot of variety than what people can think of. The next part in this series will build on the foundations provided in this introduction.

You can download the script to populate the Sample table here.

The next article in this series