In the 18th part of the SQL Server Always On Availability Group series, we will discuss the cross-database MSDTC support in an availability group.

In this article, we will learn the following topics:

A requirement of MSDTC in SQL Server for distributed transactions

MSDTC ensures e any in-doubt transactions are either aborted (rolled back) or committed (rolled forward).

Do you use distributed transactions in your environment?

MSDTC for the Windows failover cluster

You might see MSDTC clustered service in a Windows failover cluster along with SQL Service. Starting from Windows 2008, it is not mandatory to configure MSDTC to build a cluster. However, if you install MSDTC in a failover cluster, you need to specify the DTC resource IP address and shared storage.

In a failover cluster, we can have either the local MSDTC or clustered DTC. Suppose you have a clustered DTC for distributed transactions. In the below image, we have SQL and MSDTC roles on the Node1. Usually, you should have the MSDTC role on the same node where your SQL role exists.

Now, suppose you shut down active node SQLNode1, it causes your resources SQL and MSDTC to failover from SQLNode1 to SQLNode2. MSDTC maintains its log in the shared drive, and it also failed over to the new primary node. In this case, MSDTC can use the log and handle the in-doubt transactions. 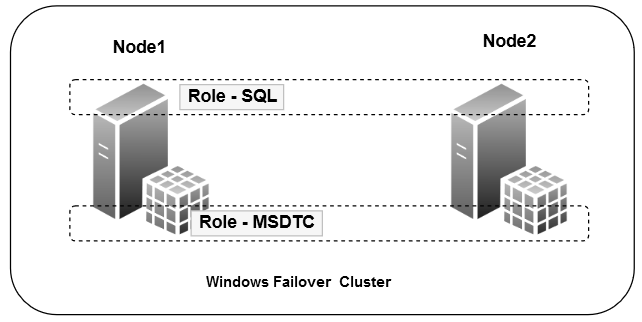 In case you do not configure MSDTC in the failover cluster, SQL Server uses the MSDTC running locally on the node. It is slightly complicated because the MSDTC log is not available in the case, one of the nodes is not available.

Suppose the node1 is failed (shut down) and it caused SQL resource failed over to the node2. In this case, node1 has an in-doubt failed transaction. To resolve the transaction, node2 MSDTC tries to contact the node1 for checking the transaction status. If it can contact the node1 MSDTC, it takes actions as per the logs. Else, it uses the configured value in the in-doubt exact resolution SQL Server configuration. We can configure the values using the sp_configure system stored procedure.

It has the following three configurations:

In the SQL Server always on configuration, we use the failover cluster base for an availability group.

Two-phase commit in a distributed transaction

The two-phase commit process uses the following phases, as shown below: