The Data Flow Task is an essential component in SQL Server Integration Services (SSIS) as it provides SSIS ETL developers with an ability to conveniently extract data from various data sources; perform basic, fuzzy to advance data transformations; and migrate data into all kinds of data repository systems. Yet, with all its popularity and convenience, there are instances whereby the Data Flow Task is simply not good enough and recently, I got to experience such inefficiencies. To demonstrate some of the limitations of SSIS’s Data Flow Task, I have put together a random list of Premier League’s leading goal scorers for the 2019-2020 season.

Script 1 shows a definition of a SQL Server table that will be used to store data imported from Table 1.

With my source (Table 1) and destination (SQL Server table in Script 1) defined, I proceed to save the data from Table 1 into a CSV file and successfully import it using a Data Flow Task in SSIS, as shown in Figure 1. 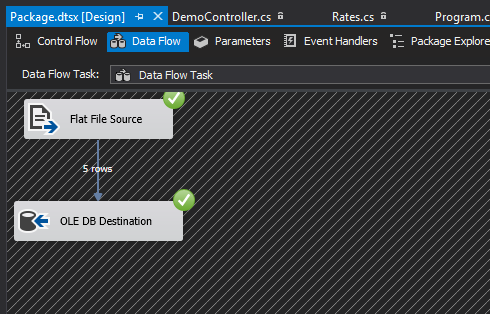 Now, suppose our source dataset is later updated to include a player’s Age column, as shown in Figure 2.

In order to bring in this new column, we refactor the definition of our SQL Server target table to include the “Age” column. However, when we run our SSIS Data Flow Task package – without updating the metadata of its flat file connection, you will notice in Figure 3 that all data under the “Age” column has been appended to the existing “Jersey Number” column. This is because the column mappings in both the flat file connection and the Data Flow Task have not dynamically refreshed to detect the latest structural changes in both source and target datasets.

Another scenario that is likely to get your Data Flow Task throwing errors is when columns in the source dataset get reshuffled. For instance, Figure 4 shows the same dataset as Table 1, but this time, columns “Player” and “Pos” have swapped positions.

The first thing you will notice when you try to import the reshuffled data is that whilst the content in rows appear to have been swapped – thus matching the changes in our latest dataset (in Figure 4) – the column headings in the flat file source output remain in their old positions thus creating a mismatch between values and labels, as shown in Figure 5.

Figure 5: Preview of Flat File Source data via a Data Viewer within a Data Flow Task

Not surprisingly, when we press “Play” in the data viewer to allow this mismatched input data to continue downstream, we run into an error, as shown in Figure 6. 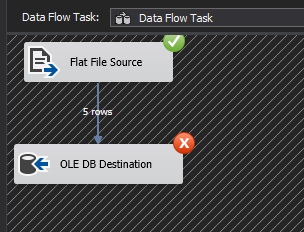 If you closely examine the details of the error encountered in Figure 6, you will see that a data conversion error occurred as the first column was expecting a numeric value instead of a string.