PowerShell has become the ultimate choice for many database administrators because of its efficient way of handling and managing automation in a simple, quick way. It’s built on .NET Framework and uses Object Models such as COM, ADSI, ADO, and WMI. PowerShell has replaced the traditional way of scripting that used many legacy scripting practices to monitor SQL instances.

I’ve been asked on several occasions about how to store the output of PowerShell WMI data into the SQL table. The question comes up so frequently that I decided to write this article.

When sending data within a system (such as a PowerShell object to a cmdlet), the process is straightforward. However, with non-native data interchange (for instance, WMI to SQL), the process can potentially get complicated. Due to this, many purists suggest sticking to simple interchange formats, such as CSV, JSON or in some cases, XML.

Let’s get out and see the possible options to transform WMI data to SQL table. In this article, we will:

This guide details the working example of checking disk space by querying WMI.

Microsoft brought in WMI in order to simplify the management of the different classes of operating systems. While automation was one of the reasons for bringing WMI, the primary focus was to provide developers with handles that they could use when creating applications for Windows. But of course, WMI has these nifty uses as well.

The simplest way to get the disk space information is with the Win32_LogicalDisk class. We filter the content to pick only DriveType=3 which is the type number for local drives.

We discuss the transformation of the above data into a SQL Table using some direct as well as indirect methods in this post:

Before we proceed, let’s look at what we need before we can proceed:

Let’s now start transforming the data we received, into a SQL table.

The Invoke-Sqlcmd is a wrapper class and PowerShell version of SQL Server sqlcmd command with additional capabilities such as data manipulation and data transformations with a focus on the output data.

The process is pretty simple:

Let us prepare the script

The below screen shot shows the steps and the results. The output is queried from the table tbl_PoShDisk

There we go; we see how the data from the WMI query was transferred to an SQL Table

Another method to execute a query in PowerShell is to use ADO.NET libraries, which requires creating a DataSet, then creating a DataAdapter, and finally filling the DataAdapter. For many data retrieval needs from scripts ADO.NET can be a little too heavy. Fortunately, there are several ways to make this task simpler and still retain the benefits of the .NET DataTables. Let’s look at three methods to get SQL Server data from PowerShell. Once you have the data in DataTable, we can transform the data into a number of things including piping the output to one of the built-in cmdlets.

The output is given below 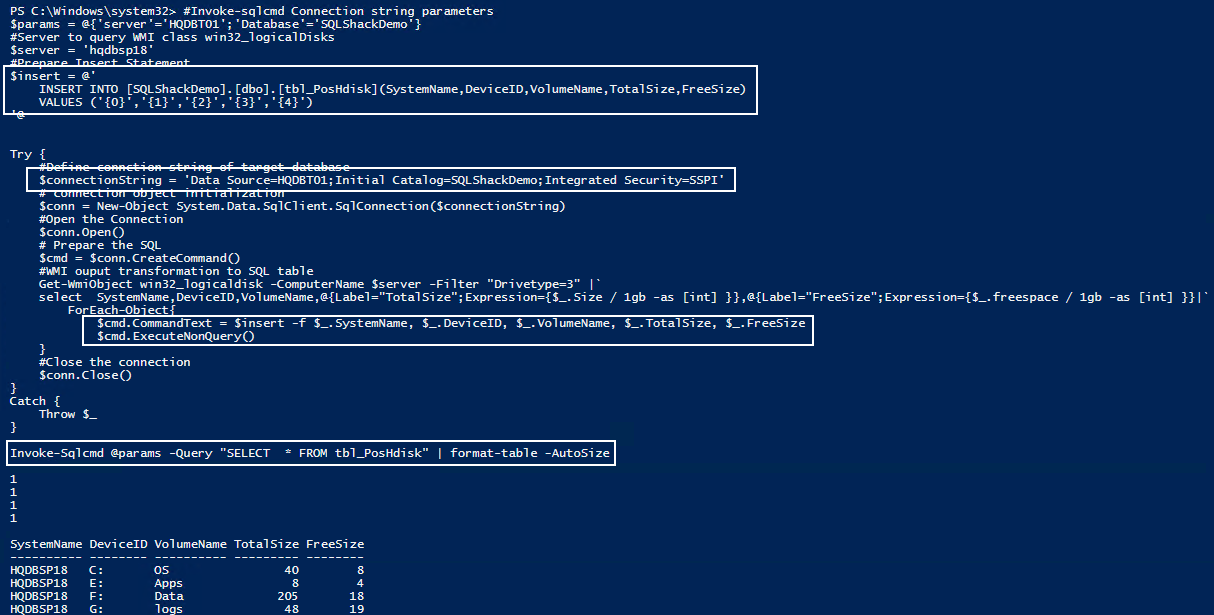 We write a function to perform the copy operation. The function, Out-DataTable can be found in Appendix (A). This function takes care of converting the output of the WMI query to the data table. The data-table output is then fed to the SqlBulkCopy class in order to write the data to the SQL table. The SqlBulkCopy class loads a SQL Server table with data from another source which in this case is Win32_LogicalDisks. 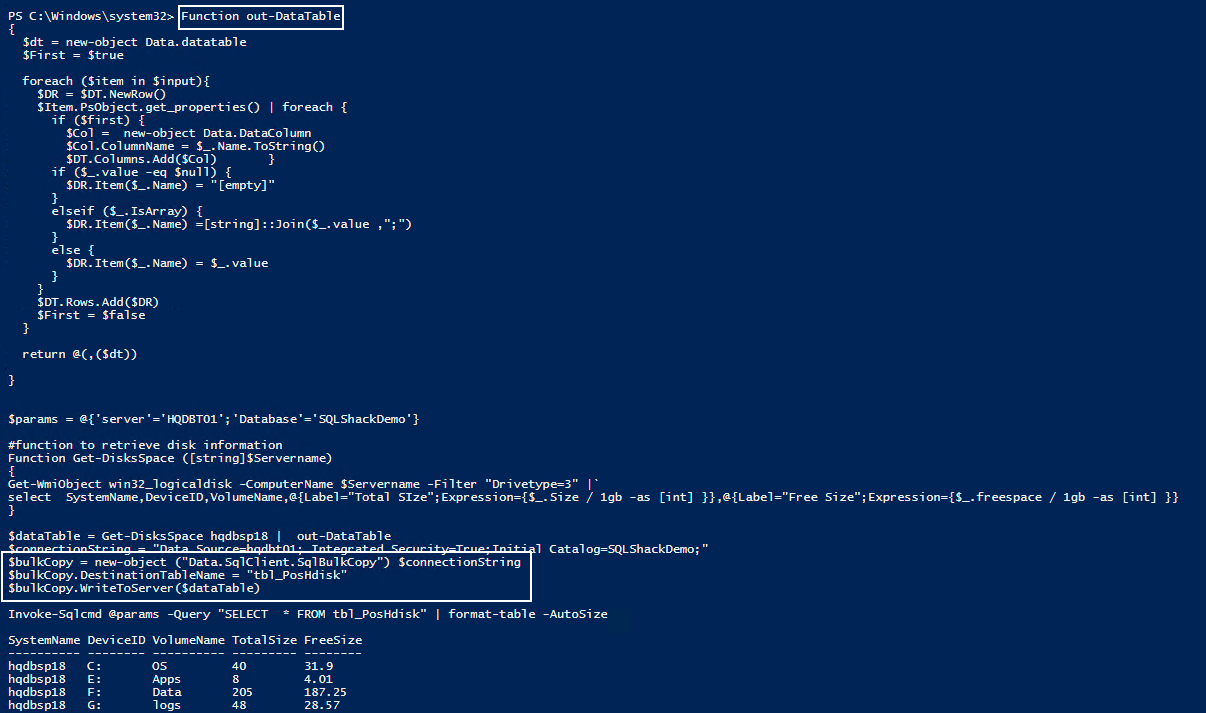 We can also use SQL constructs with the PowerShell Export options. We can:

Let’s look at these processes one by one.

The ConvertTo-Json cmdlet converts an object to a valid JSON string. Using this cmdlet, the output is converted to JSON (JavaScript Object Notation). The JSON file is then queried using JSON construct in SQL Server, called OPEN JSON, to transform the data form the win32_LogicalDisk WMI class, to a relational table.

The WMI output is stored in a variable which is then written to a JSON file using Out-File formatting cmdlet.

The output of JSON file is shown below 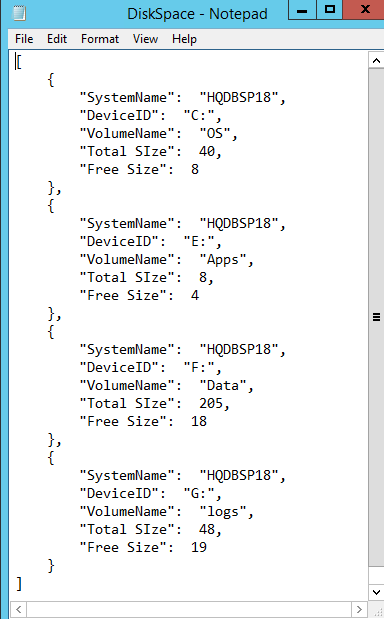 Let’s now feed the JSON into an SQL table

The XML data comes from the XML file and is stored in a column bulkcolumn; use the XML methods, extract values with xml.value(), project nodes with xml.nodes(), use CROSS APPLY to join its nodes to derive all the values of the nodes.

The below query writes WMI output to XML File

The below is the generated XML file 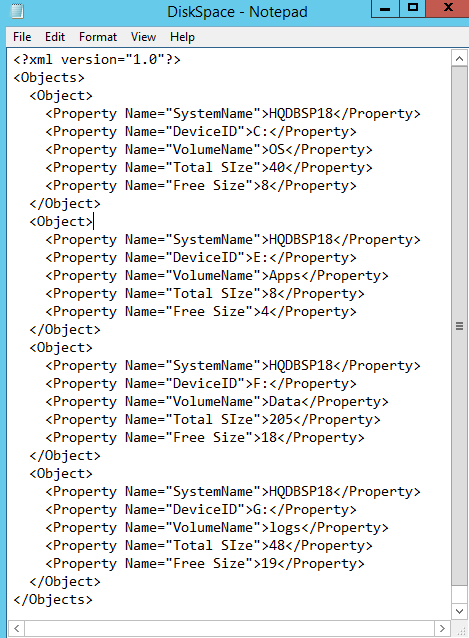 The first statement we’ll look at is BULK INSERT, which lets you import data from a data file into a table In the following example, I import the data from the CSV file into the SQL table

Different methods and various techniques can be used to achieve a specific result. The challenge is to use the right tool, the right way, for the right job: the proverbial “Driving a screw with a hammer” problem. When presented with a new tool set, we shouldn’t try and use it the same way as other tools we’ve had in the past. Instead, we must learn the tool so we can make the best use of it for your process.

In this case, we may have to consider the efficiency of the methods we listed, and make a decision about which method to use.