One shared characteristic among popular data visualization tools such as Power BI is the ease at which data can be extracted from a variety of disparate data sources, usually at a click of a button, as shown in Figure 1. Such convenience, though, tends to come at a cost as you often have little control over how background scripts used to extract data are generated. Yet, this should be of utmost concern for data architects and BI developers alike as rarely do you find auto-generated scripts that are efficient and optimal. In this article, join me as I put on my DBA hat and trace, monitor and review SQL batch statements that are auto-generated by the Get Data feature in Power BI using SQL Server Extended Events. 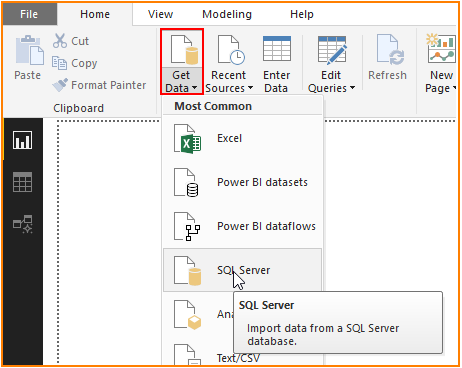 The Get Data feature in Power BI allows for a connection into SQL Server to be established using different connectivity modes. However, for the purposes of this discussion, we will concentrate only on the Import mode of data connectivity in Power BI. The Import connectivity mode works by extracting a copy of the dataset from a data source and save it within a Power BI (.pbix) document. This mode of connectivity is suitable in environments wherein your connection to the data source is unstable or when working with a data dump. One obvious downside to storing a copy of your data within a Power BI document is that it could potentially increase the overall size of your Power BI document.

Whenever Power BI connects to a data source such as SQL Server using an Import connectivity mode, it tends to leave an imprint of itself within that data source environment. Fortunately, by running either a SQL Server Profiler or SQL Server Extended Events, we can get to see just what kind of activities occur when Power BI extracts data out of a SQL Server environment. SQL Server Profiler is now a deprecated feature in SQL Server, hence, we will only make use of SQL Server Extended Events in our demo, specifically the SQL:BatchCompleted event as we are more interested in monitoring back-end queries generated by clicking on the Power BI interface.

Assuming that you have already setup the SQL Server Extended Events session for the SQL:BatchCompleted event, we begin our data import in Power BI by configuring a connection to our SQL Server instance, as shown in Figure 2.

Another approach to using the Get Data feature in Power BI involves specifying a user-defined SQL statement instead of having Power BI generates it for you. This way, you have more control of the filters you want to apply and the fields you want to retrieve. To demonstrate this approach, we begin by configuring a SQL Server connection, as shown in Figure 10 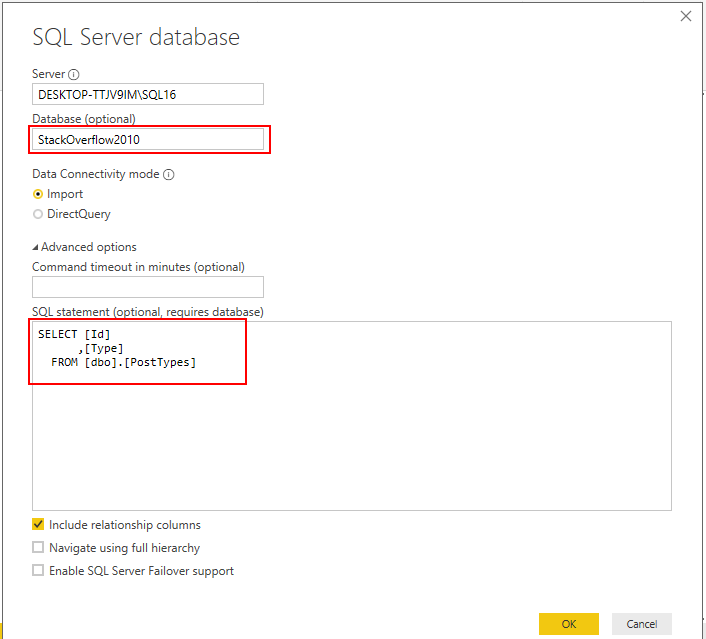 This time clicking OK at the bottom of Figure 10 does not result in Power BI submitting SQL batches into SQL Server, instead, you are redirected to the data preview window shown in Figure 11. 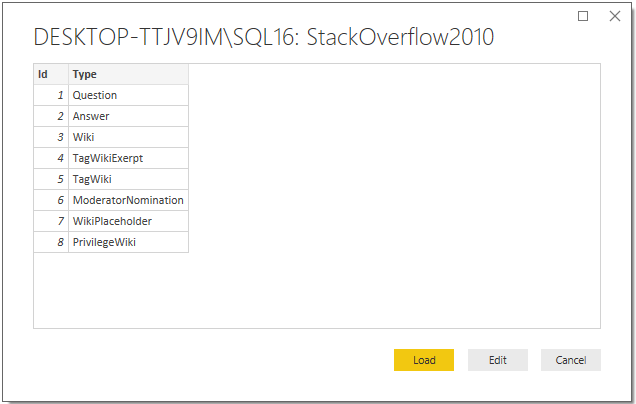 Only after you have clicked the Load button in Figure 11, does Power BI generate SQL batch statements. The auto-generated batch contains three SQL:BatchCompleted events as shown in Figure 12. The first event runs a SELECT @@VERSION command whilst the second and the third are a repetition of the custom SQL statement we provided in Figure 10.

It’s that simple! You no longer have to worry about Power BI querying system objects to get database and table/view metadata or users trying to access databases they shouldn’t be accessing. However, there is a catch in that unlike in the Navigator window approach wherein your Power BI model entities were created using the names of source tables/views, entities created out of importing data using a user-defined SQL command are prefixed with Query which means you have to edit your model and rename the object accordingly, as shown in igure 13. 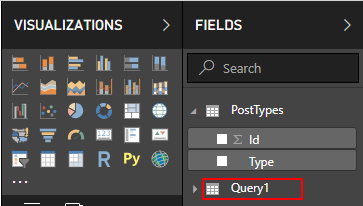 Another downside to using the custom SQL statement option is that you can only import one dataset at a time, whereas in the Navigator approach, you could select as many tables/views as you like. The rest of the comparisons are between the two approaches is given in Table 1.

Power BI is an exciting and powerful data visualization tool but like all such tools, it has its pros and cons, particularly when importing data. We hope this article provides a comprehensible approach on monitoring batch statements with Power BI using SQL Server extended events. Also, you get an idea of whether to write your own T-SQL queries to extract data or rely on Power BI to auto-generate scripts that will facilitate data import from SQL Server.