Just over a year ago, I published How to migrate SQL Server 2017 Master Data Services Models into another server article, that essentially demonstrated the migration of a SQL Server Master Data Services (MDS) model from one MDS instance to another. Like many of my previously published articles, I have since used the aforementioned article as a technical reference (i.e. syntax lookup for using MDSModelDeploy.exe utility) during the implementation of MDS-related projects for my clients.

As shown in Figure 1, SQL Server Master Data Services production environments tend to consist of more than one models and in recent weeks, I participated in a project that required a migration of multiple MDS models from one instance to another. It was from this project wherein I noticed that the article I have been using as my technical reference did not cover bulk-model migration of MDS models. In this follow-up article, I plan to address such a limitation by demonstrating several approaches that could be utilised in order to perform an MDS bulk-model migration from one instance to another.

Let us begin with a simpler approach, which involves following the steps outlined in the How to migrate SQL Server 2017 Master Data Services Models into another server article. The only change required is that you will have to repeat the same process (of model migration using MDSModelDeploy.exe utility) according to the number of models you have to migrate. For instance, suppose we have to redeploy all three models shown in Figure 1 into their respective standalone MDS instances as illustrated in Figure 2. For each model, we will have to run a CMD command script that will: 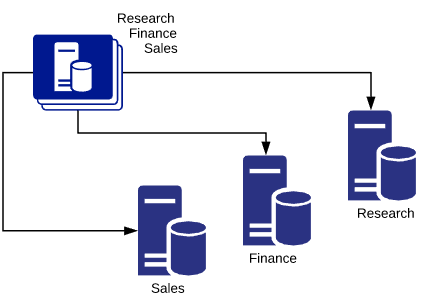 One obvious downside to such an approach is that it can easily be tedious and error-prone. This is because, the more MDS models you have to migrate, the longer the process becomes as you need to edit and maintain your CMD command script to ensure, amongst other things, that your source-to-target parameters are correctly specified including model name, MDS service as well as the location of the package file, as indicated in Figure 3.

Instead of writing CMD commands to migrate one MDS model at a time, consider the MDS database backup/restore option which involves taking a backup of an MDS database and restoring it in another MDS environment.

Whilst both approaches (CMD command scripting and MDS database backup/restore) differ in the manner in which one goes about performing MDS bulk-model migration, they do share an underlying limitation in that both approaches strongly rely on manual execution of their processes. Most production deployments are usually performed during off-peak business hours (i.e. after hours, on weekends, holidays, etc.) and thus require deployment artefacts to be automated with little to no user intervention.

Therefore, the approaches that we have presented thus far would not pass real-world production guidelines for deployments. We rather need to look for another approach that favours automation and scheduling of all tasks related to MDS bulk-model migration. One such approach is the SSIS Scripting approach which involves calling MDSModelDeploy.exe utility within a SQL Server Integration Services (SSIS) package. For automation and scheduling, the SSIS package can also be configured to run using scheduler tools such as the SQL Server Agent job.

In this article, it is assumed that the reader has a basic knowledge on SSIS components like Execute Process Task in SSIS and Foreach Loop Container.

Figure 6 shows the Execute Process Task Editor with the Executable property set to the location of our MDSModelDeploy.exe utility.

The Arguments property of the Execute Process Task is set via an expression as indicated in Figure 7. The expression, in turn, uses package variables to assign a model name and package file name.

A copy of this package (developed in SSDT 2015) is available under the downloads section at the bottom of this article. Please feel free to customize it according to your preference. One change that comes to mind is that you can edit it to include a File System Task that will perform house cleaning by either deleting or archiving copies of MDS file packages once they have been deployed.

In this article, we’ve looked at several approaches for migrating an MDS instance containing multiple models into other MDS environments. We demonstrated the pros and cons of performing MDS bulk-model migration by running the MDSModelDeploy.exe utility via a command prompt window. We also listed all the access permissions you would need to implement the MDS database backup/restore approach. Ultimately, the SSIS Scripting approach was deemed more suitable for production deployments due to its ability to be dynamic, scheduled and automated.