When maintaining SQL Server, it is essential to get an accurate perception of how busy it is. Two metrics that are often considered as indicators of how busy SQL Server is are Batch Requests/sec and Transaction/sec. When those metrics trend higher, they often affect all other metrics and make them go higher as well. While they could look similar, they are using a different type of starting point for measurement; the batches and transactions. So, to correctly understand those important metrics, lets first try to understand what the batches and transactions in SQL Server are and what are the differences between the two

When executing multiple SQL Server statements as a group of statements, or when executing a single SQL statement that consists of a group of multiple SQL statements, it is considered as a SQL Server batch. That practically means that the result is returned after the entire batch statement executes. The advantage of such approach is that execution is more efficient compared to executing each containing statement independently. One aspect of better efficiency lies in the fact that network traffic is reduced in most cases, the second aspect is that targeted data source can often optimize execution of the statements in a SQL Server batch

Some facts about SQL batches:

Explicit batches – this is when two or more SQL statements are combined in the single batch script and separated by semicolons (;)

Arrays of parameters – When parametrized statements are used by the application, having an array of parameters is an effective way of to perform the execution of a single statement multiple times as a batch execution

In the above example, using question marks (?) or the properly called parameter marker means that they are bound to application variables. So, when application provides parameters to the SQL statement, it allows inserting multiple rows of data in a single execution. For data sources that do not support arrays of parameters, the ODBC driver can emulate the arrays thus passing the set by set of values to the statement. In that case, the statement executes as a batch of individual statements for each set of values

At its elemental level, a SQL Server transaction is essentially the SQL batch with a “cancel with rollback” option

Both, SQL transactions and SQL batches are more complex concepts with lots of variations, but this is all that needs to be known about the SQL batch/transaction implementation concepts to correctly understand the batches/sec and transactions/sec metrics and the rest of the article.

Now, let’s focus on the metrics itself.

The Batch Requests/sec (in some literature referred as Batch Requests per Second) metric is SQL Server performance that provides information about the number of SQL batches SQL Server received in one second. For a DBA that knows their server well, this is probably the first metric to look for when slow query execution issue is reported. However, the Batch Requests/sec metric itself should not be looked in isolation from other metrics. It is important to track and put in correlation the CPU and I/O performance to get the correct and comprehensive insight of how the SQL Server is performing. The metric itself is not something that is a direct representation of an issue, and there are few things to understand before jumping to a conclusion: 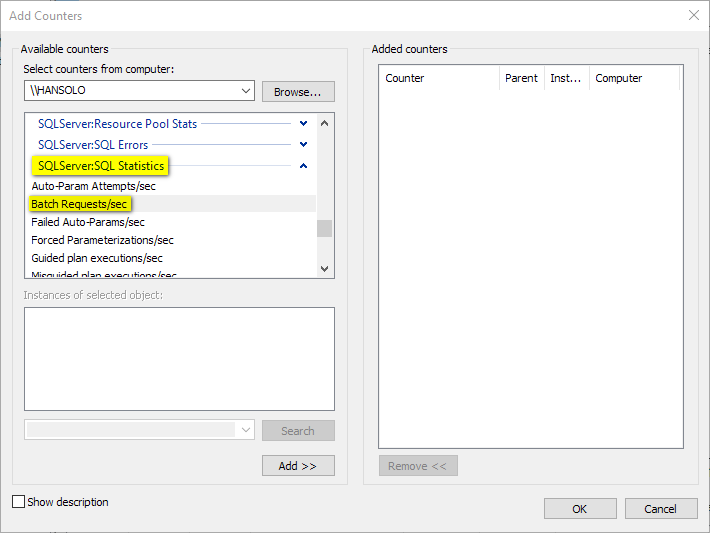 Locate the Batch Requests/sec metric and add it for monitoring 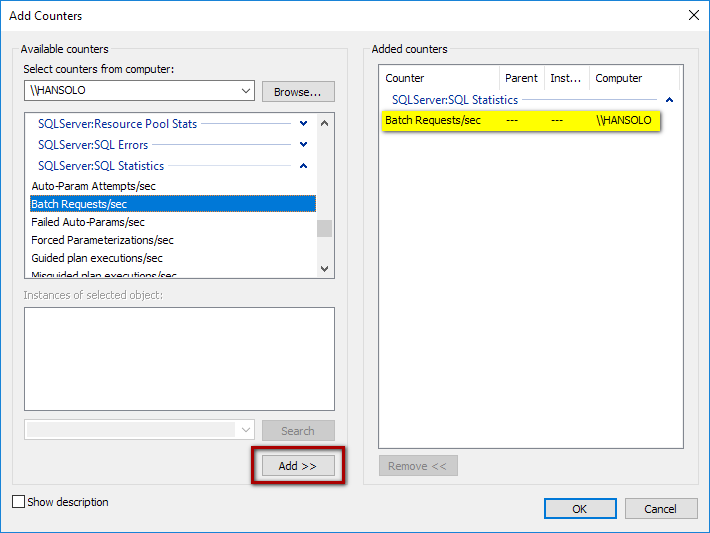 After the OK button is pressed, Batch Requests/sec monitoring starts 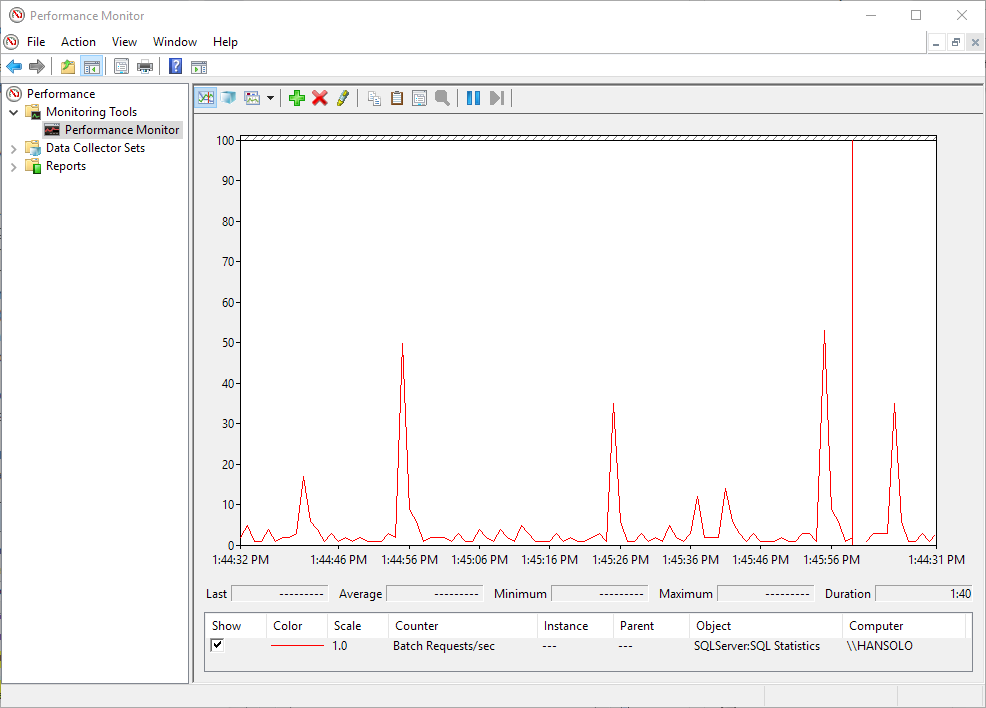 When transferred into numbers:

The number of SQL Server transactions depend significantly on global system performance but also on some system resources such as a number of connected users, the system I/O capacity, available memory cache, and statements complexity.

Transactions/sec metric is not one of those where determining that value is too high or too low is possible using some rule of thumb. The value that this metric return is of a relative nature, which mean that proper interpretation of the metric value would be a “(much) higher than yesterday or last week” or a “(much) lower than yesterday or last week.”. Having a high value of the Transactions/sec metric is only an indication SQL Server activity amount, not necessarily an indication of a problem. So, the best practice in monitoring this metric is establishing the baseline that could then be used to determine when the metric have oddly high or low values

The Transactions/sec metric is part of the SQLServer:Databases (MSSQL$<Instance_Name>:Databases for a named instance) performance object

To monitor this counter, open performance monitor (PerfMon) and click on the Add counters button. 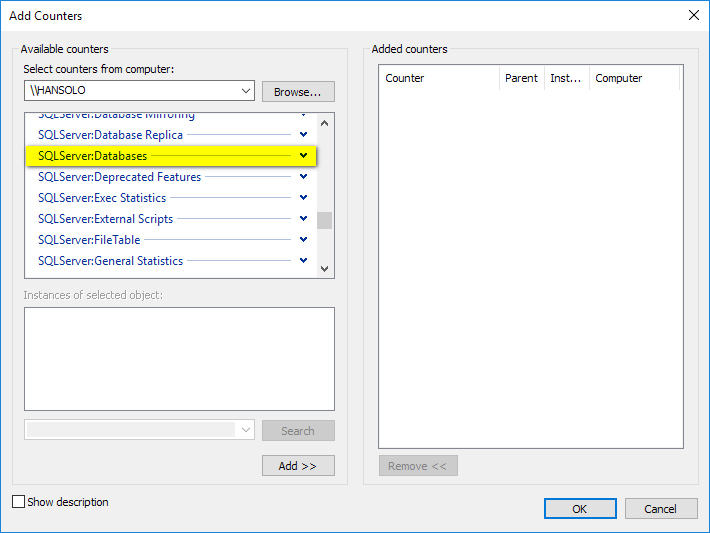 In the Add counters dialog, locate the SQLServer:Databases performance object and expand it. Locate the Transactions/sec metric, then select the database instance to be measured and then add the metric for monitoring 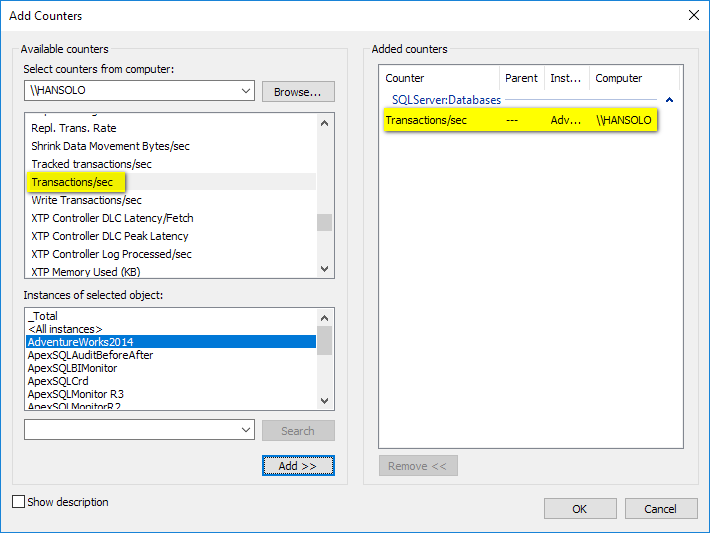 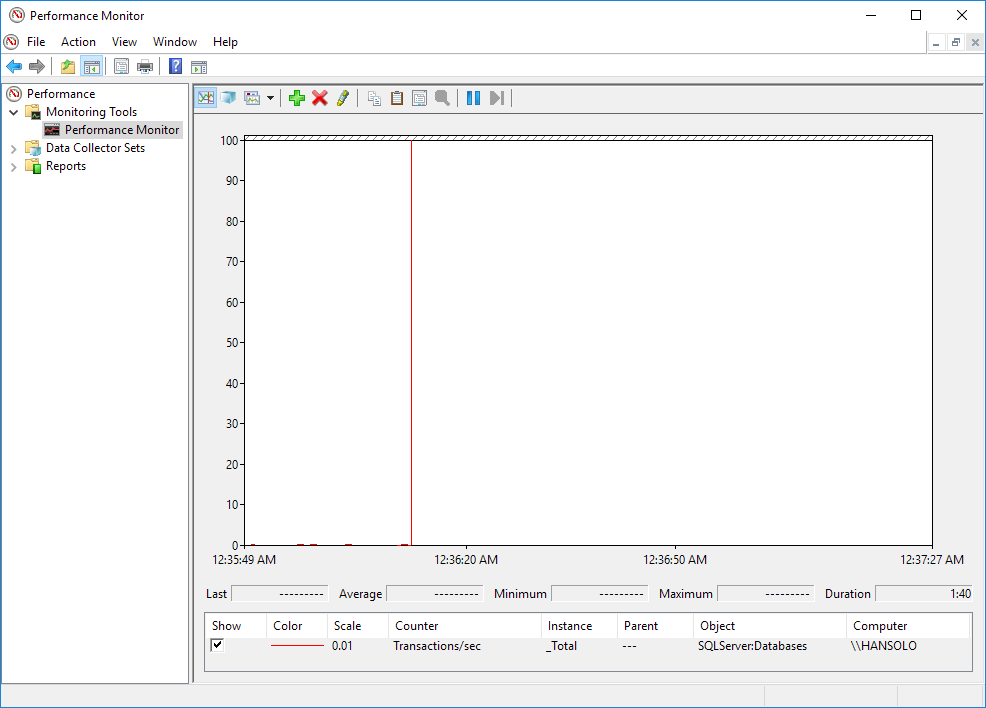 When it comes to maintaining SQL Server, it is essential for a DBA to know what the amount of throughput that the SQL Server is capable of processing. More precisely, what number of SQL queries and SQL transactions can the SQL Server process. While both metrics are essential indicators of SQL Server workload (amount of work that SQL Server performs), they are often misinterpreted due to insufficient knowledge of the very essence of metrics. As most database-related metrics do not see a many of stuff that occurs on SQL Server, Transactions/sec is no exemption.

Most experienced DBAs first instinct is to inspect the Batch Request/sec metric as a primary indicator of the workload, and that is not by accident. The Batch Requests/sec is a preferred metric as it can, in most cases, provide more reliable information about the SQL Server workload. All squares are parallelograms, but not all parallelograms are squares; a similar analogy could be established for those two metrics as much higher number of statements qualifies as batches than as transactions. Because of that, Transactions/sec has a “blind spot,” and that will be elaborated with a practical example

To demonstrate this, perform a test using a few simple queries and Performance monitor:

Use the AdventureWorks database for this demonstration 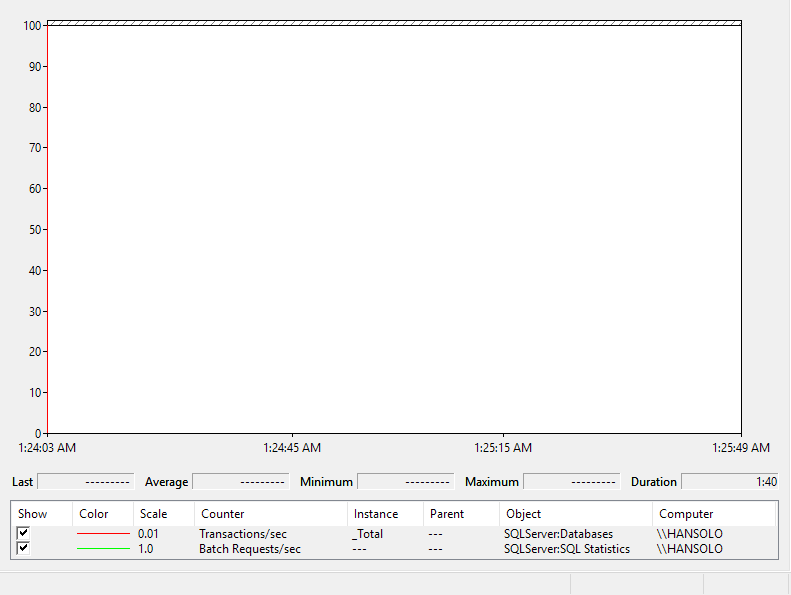 Run SQL Server Management Studio (SSMS) and connect to SQL Server. Open the new query tab and set the query context to AdventureWorks database. Use the query below

The query must repeatedly be executed for sometimes, and the easiest way to do that is to execute the query in SQL Server Management Studio by pressing the F5 (function taster on a keyboard) and keep it pressed for some time. 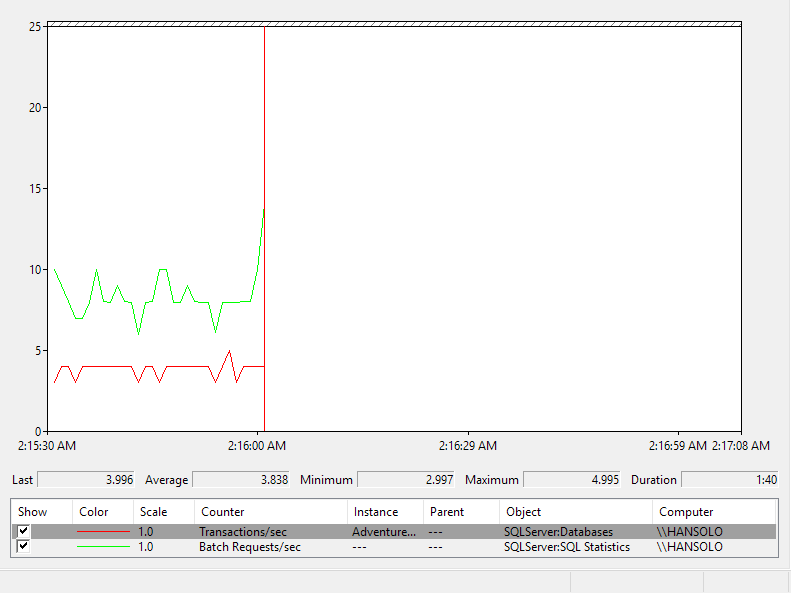 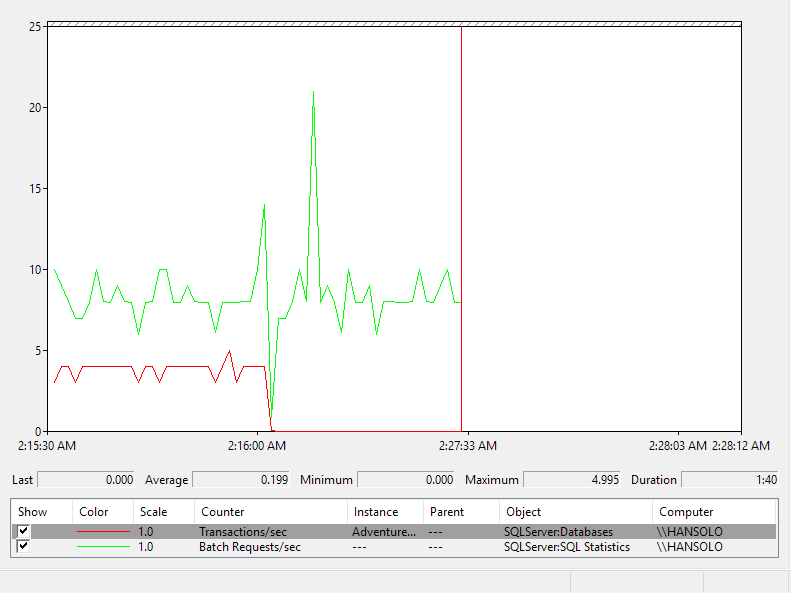 Now, what can be seen in Performance Monitor? From the image above, it is apparent that the Batch Requests/sec metric rises to ~10, and even spiked to above 20, while the Transaction/sec counter went down to 0 and stayed there all the time. Naturally, it is because the executed statement qualifies as a batch, but does not qualify as a transaction, hence causing that the Transactions/sec metric cannot register when that kind of work occurs in SQL Server

It is the evident blind spot that Transactions/sec metric has.

However, what happens when DML statement is not explicitly wrapped in the transaction. Let’s execute such a DML statement to see what we can expect 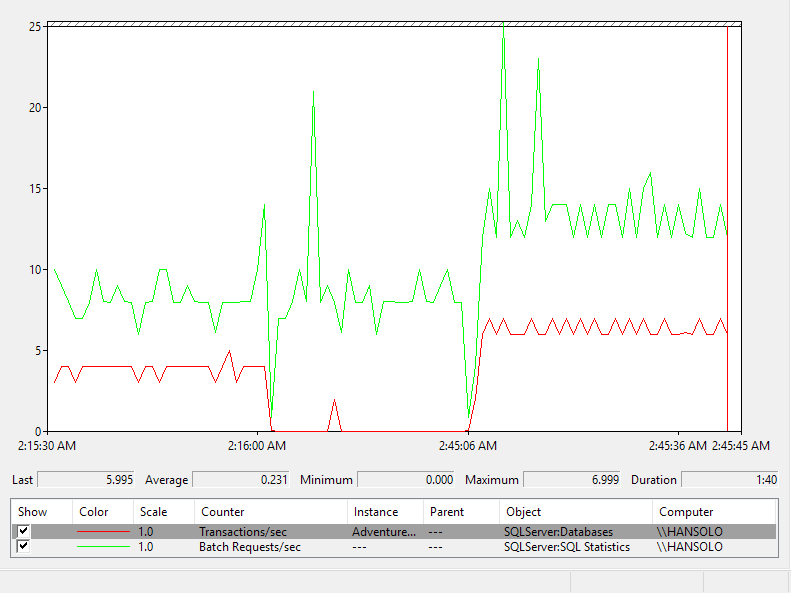 Again, the Transactions/sec metrics resembles and follows the Batch Requests/sec metric. It is because DML statements such as INSERT, UPDATE and DELETE operate in the context of the transaction by default, thus no need to wrap it in the explicit transaction via BEGIN TRAN/COMMIT statement pair

While both metrics are the first general stop for DBAs when checking the amount of work SQL Server are dealing with, Batch Requests/sec is generally considered a more reliable metric. It is not perfect as already explained, but as demonstrated, it can see more than the Transactions/sec metric.

Since Batch Requests/sec has, by far, fewer blind spots compared to Transactions/sec, it should be the first one to look at. However, the full power of troubleshooting lies in knowing well ones own SQL Server in the first place. Then wisely use those two metrics in a combination to eliminate as many blind spots as possible, and, in that way, as much complete the picture of how busy SQL Server is as completely as possible. That could be a winning approach to understanding whether the numbers behind those metrics are something that negatively affects your SQL Server.