Since the advent of SQL Server 7.0, the best way of raising T-SQL related errors back to calling applications has been through the usage of the RAISERROR statement. Figure 1 demonstrates a combination of mandatory parameters (i.e. msg_id/msg_str, severity, state) as well as optional parameters (i.e. WITH option) that ought to be provided for the purposes of successfully using the RAISERROR function.

The content of an exception message raised through the RAISERROR statement can either be hard-coded or retrieved from the sys.messages catalog view based on a corresponding error code number:

Noticeably in this syntax is the disappearance of mandatory parameters that dictates the usage of RAISERROR. Thus, the THROW statement is simpler and easier to use compared to RAISERROR as you have an option of not parsing any parameters. For instance, Figure 9 shows a stored procedure that, like the example given in the RAISERROR discussion, attempts to divide by zero. However, unlike the numerous local variables that were used in the RAISERROR discussion for catching exceptions, Figure 9 simply shows that it only takes a single line within the CATCH block to handle exceptions when the THROW statement is used. 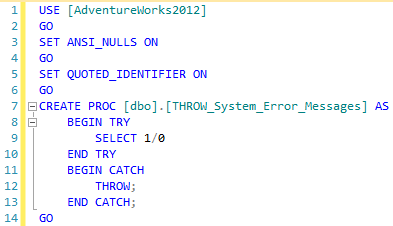 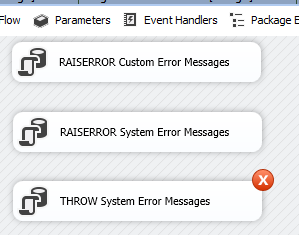 The preceding section indicated that there is ultimately a simpler and convenient way of re-throwing exceptions when THROW statement is used as compared to RAISERROR. However, the examples demonstrated in preceding sections should not justify an absolute replacement of any T-SQL code that references RAISERROR with a THROW statement. Instead, RAISERROR can still be utilised for some of the requirements that the THROW can’t fulfil.

In this section we will take a closer look at the differences between RAISERROR versus THROW statements. Despite the two statements being used for re-throwing exceptions to calling applications, they tend to behave differently in the way they go about re-throwing exceptions. One significant difference is in the way they handle user exceptions (i.e. exceptions with error codes of 50000 or more) versus system exceptions (i.e. exceptions with error codes less than 50000). Below is a list of points that I have put together to persuade you that in some T-SQL scripts one statement maybe suitable over the other: