In this article, we will explain what the SQL injection attack is, why it could be hazardous, and how to defend our SQL database from this attack using parameterized queries and some third-party tools.

When poorly designed or configured, enterprise database and information storage infrastructures are susceptible to a wide range of abuses and attacks. According to a survey conducted by the Open Web Application Security Project (OWASP) in 2021, there are ten critical security risks for web applications where Broken Access control, cryptographic failures, and injection are the top.

Side Note: All code examples in this article are made using SQL Server 2019 and Stack Overflow 2013 database.

What is an SQL injection attack?

It is one of the most popular attacks known for several decades. As the name suggests, this attack inserts an SQL command within another command built dynamically by the application. A successful and properly exploited injection may recover sensitive data from a database or modify, delete, or insert new data.

If the text field’s contents are just passed to SQL Server and executed, then that text field can contain a completely new query that does something different.

What are the principal application vulnerabilities that allow injection?

In brief, an SQL injection occurs when the developer provides information about the database schema within the application code and accepts user input directly into a SQL statement without adequately filtering out dangerous characters.

The following example is a stored procedure created to select the users from the Stack Overflow users table, where the WHERE clause is passed entirely as one parameter and concatenated with the SELECT command:

The WHERE clause is built on the application side and sent as a parameter to the database. This bad practice is used sometimes when developers want to create one dynamic query that can be used for several purposes in their application.

To check how an SQL injection can occurs within this stored procedure, we will replace the EXEC(@strQuery) line with SELECT @strQuery to check the executed SQL command.

If the @SelectFilter parameter contains a valid filter such as “[Age] = 30”, the SQL command will look like this:

Let us assume that the following value is passed as input parameter “[Age] = 30;TRUNCATE TABLE [StackOverflow2013].[dbo].[Users];–”, the SQL command will look like this:

In this case, two SQL commands are executed: a SELECT command that returns all users aged 30 and a TRUNCATE command that erases all the data in the users’ table after executing the select command. 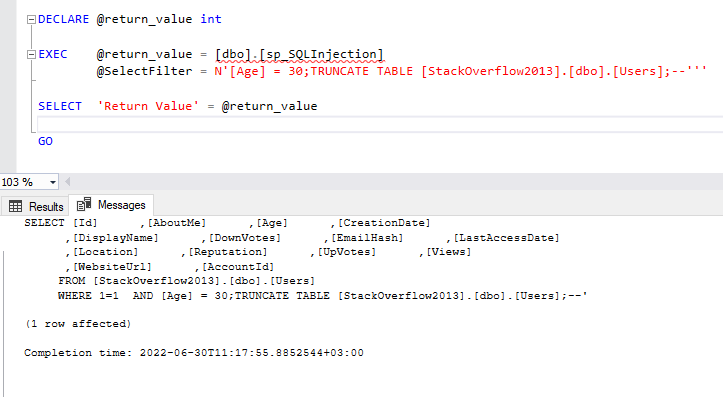 As another example, let us consider the following stored procedure:

This stored procedure takes two input parameters for the SELECT command, the user age, and display name values. The SELECT command is built normally if normal values are sent from the application. For example, Age = 30 and DisplayName = ‘Hadi’, and [Location] = ‘Lebanon’:

In case that end-user entered the following value as a display name “’Hadi’ OR 1=1;TRUNCATE TABLE [StackOverflow2013].[dbo].[Users];–‘” , the execute command will look like the following:

As we can note, the executed SQL command is composed of three parts:

We should note that injected SQL commands are not always a TRUNCATE command – as mentioned above – attackers can inject an update, delete, or even other commands. For example, the attacker can inject a command that lists the directories in the server “EXEC [master].[dbo].xp_cmdshell ‘dir'”, or even list all the tables/columns listed in the database “SELECT * FROM INFORMATION_SCHEMA.COLUMNS”, or create and authenticate a new user…

Consider the following C# console application code: the end-user passes the display name as an argument and retrieves all the relevant users from the Stack Overflow database.

As we explained in the previous example, if the end-user passes a value as “‘Hadi’ OR 1=1;TRUNCATE TABLE [StackOverflow2013].[dbo].[Users];–‘”, it will erase all the data stored within the users’ table.

One of the most common practices to protect the code against SQL Injection is encapsulating and parameterizing our SQL Commands. Parameterized queries is a technique that aims to separate the SQL query from the user input values.

The user input values are passed as parameters. They can no longer contain an executable code since the parameter is treated as a literal value and checked for the type and length.

Getting back to the examples above, we should totally avoid using the first approach we explained; it is highly vulnerable to pass the whole WHERE clause as a parameter while building the SQL query dynamically. While in the second example, as the stored procedure parameters are defined adequately, we should only change the way the SQL command is built as follows:

In that case, if the user passes a value like ‘Hadi’ OR 1=1;TRUNCATE TABLE [StackOverflow2013].[dbo].[Users];–‘, the SQL command is complied as the following:

Using parameterized queries helps the developers avoid syntax errors since they don’t have to keep track of single and double quotes to construct SQL commands.

Besides using parameterized queries and other techniques, there are several tools developed by leading companies to help developers and database administrators prevent SQL injection attacks.

ApexSQL Refactor is a SQL Server Management Studio and Visual Studio add-in that formats and refactors SQL code using eleven code refactors and more than a hundred formatting options. With it, you can encapsulate your SQL queries within parameterized stored procedures to prevent SQL injection, expand wildcards, fully qualify object names, rename SQL database objects and parameters without breaking dependencies, and much more.

ApexSQL Log is a tool that reads and analyzes the transaction log of a SQL database. It analyzes transactions and provides an output in a human-readable format. This tool is an excellent solution for reversing inadvertent or malicious database transactions; it allows database administrators to identify SQL injection attacks immediately, isolate affected/damaged data, and reverse/repair the damage.

This article explains what a SQL injection attack is and when it can occur. In addition, we explained one of the most common practices to prevent code injection, and finally, we listed some of the third-party tools that can help protect a database against this type of attack.