Microsoft SQL Server distinguishes between paging and pagination. Paging refers to handling of memory bottlenecks whereas pagination, the focus of this article, refers to dividing T-SQL query result set into discrete parts. The general concept of Pagination is prevalent in various professional disciplines (i.e. journalism, publishing, web development etc.). According to Wikipedia Pagination is the process of dividing content (i.e. website search results, newspaper article etc.) into separate yet related pages. The major benefit to such dividing of content is usually a cleaner and clearer structuring of content which enhances the reading (or browser-navigation) experience to the consumer of such content. 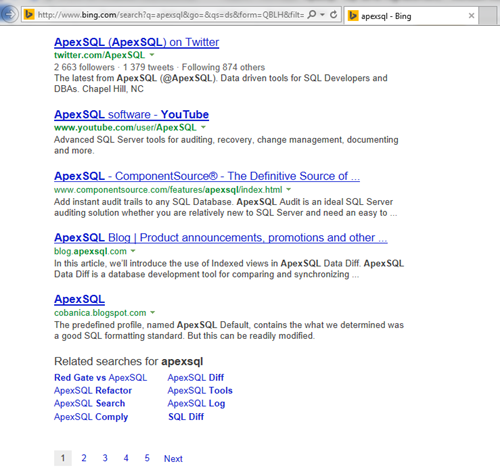 The following sub-section provides examples of how the OFFSET/FETCH and LIMIT clauses is used in database platforms such as IBM’s DB2, MySQL, Oracle and PostgreSQL.

Unlike other database platforms that conveniently handled pagination through the OFFSET/FETCH and LIMIT clauses, you’ve had to jump through a lot of hoops (i.e. use ranking functions) in order to get the pagination of query result sets to work in SQL Server. The following sub-section takes a closer look at some of the pagination work-around options that have been implemented in SQL Server prior to the SQL Server 2012 version.

In SQL Server, the query execution plan illustrates the steps undertaken by the SQL Server query optimiser to execute a given T-SQL query. In this section we will take a look at the execution plan of T-SQL queries that use the OFFSET-FETCH filter versus the queries that uses the TOP and the ROW_NUMBER clauses. For the purposes of this query execution demo, I have started off by clearing all existing cached entries. SQL Server 2012 permits the use of Database Console Command (DBCC) to clear the cache. Figure S21 shows the sample script that we have ran to clear all plan cache.

The notion of pagination has been around in many forms and across different professional bodies. In Structured Query Language, the ISO standard on SQL has provided some level of consistency in as far as the implementation of pagination across database platforms is concerned. Paginating a T-SQL query result set in SQL Server 2012 has provided a much more flexible alternative to the TOP clause. However, for a successful implementation of the pagination feature in SQL Server 2012 – rules governing the usage of the OFFSET-FETCH filter should be obeyed. Finally, in terms of the execution plan, SQL Server 2012 handles the queries that implement the OFFSET-FETCH filter similarly to those T-SQL queries that uses the TOP clause but the cost of a query that uses OFFSET-FETCH filter is significantly less compared to a T-SQL pagination query that uses the ROW_NUMBER ranking function.