The Common Language Runtime (CLR) is the heart of the Microsoft .NET Framework. It provides the execution environment for all .NET Framework code. Code that runs within the CLR is referred to as managed code.

Several services are provided by the common language to execute programs, such as the just-in-time (JIT) compilation, allocating and managing memory, enforcing type safety, exception handling, thread management, and security.

The execution of the programs developed using .NET is managed by the Just-In-Time compiler (JIT) regardless of the .NET programming language it was created with. A language-specific compiler converts the source code to a common intermediate language (CIL). This language is then converted into machine code by the Just-In-Time (JIT) compiler. This machine code is specific to the computer environment that the JIT compiler runs on. 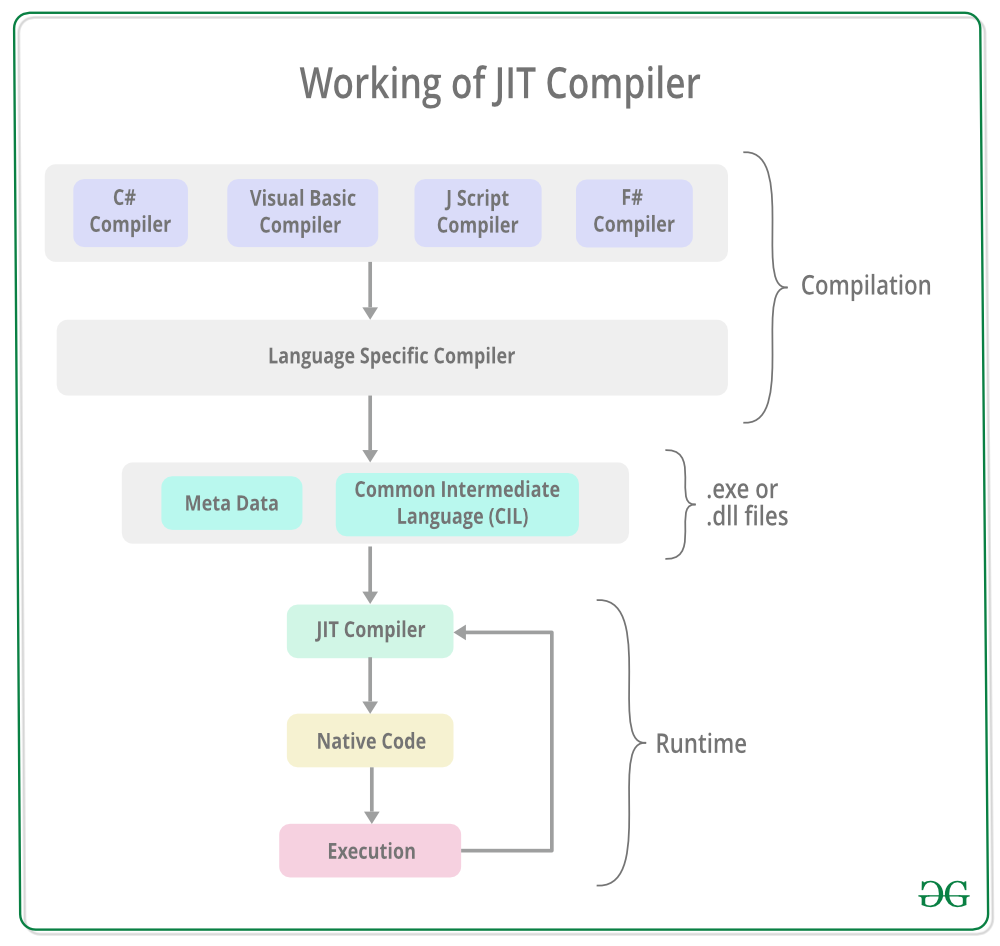 One of the benefits of SQL Server CLR is that it can achieve significant performance increases in some since managed code compiles to native code before execution. Besides, several complex operations are implemented in .NET easier than SQL Server.

The following section explains how to create a basic C# library using the .NET framework.

Side Note: .NET core and .NET standards cannot be used in CLR integration.

Our first step is to create a .NET Class library that contains the C# functions we need to use in SQL Server. To do so, open Microsoft Visual Studio and create a new project: 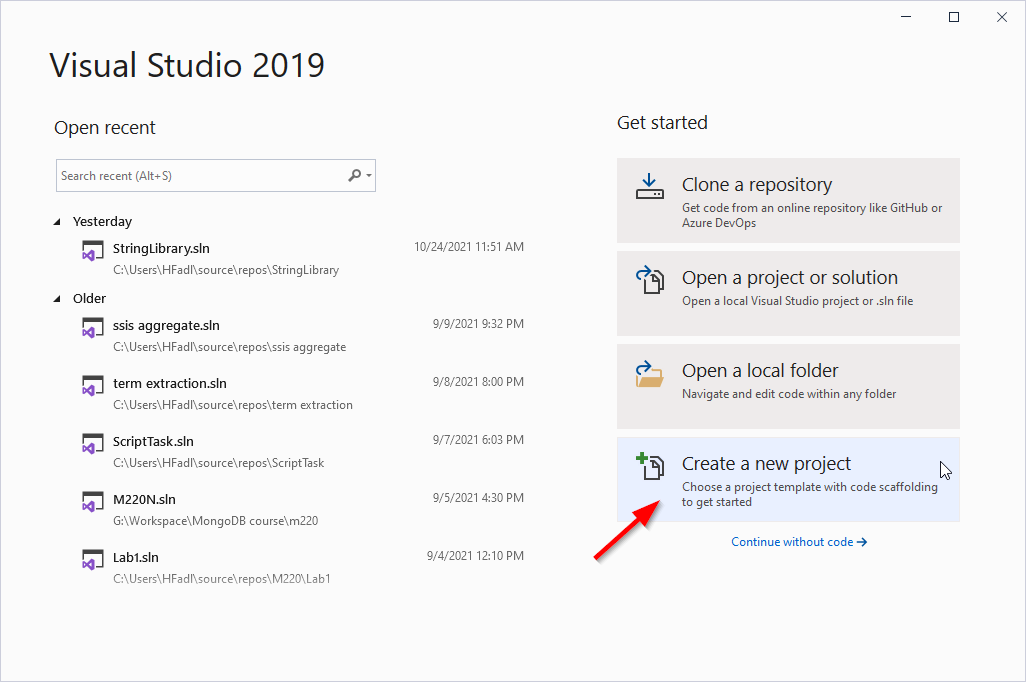 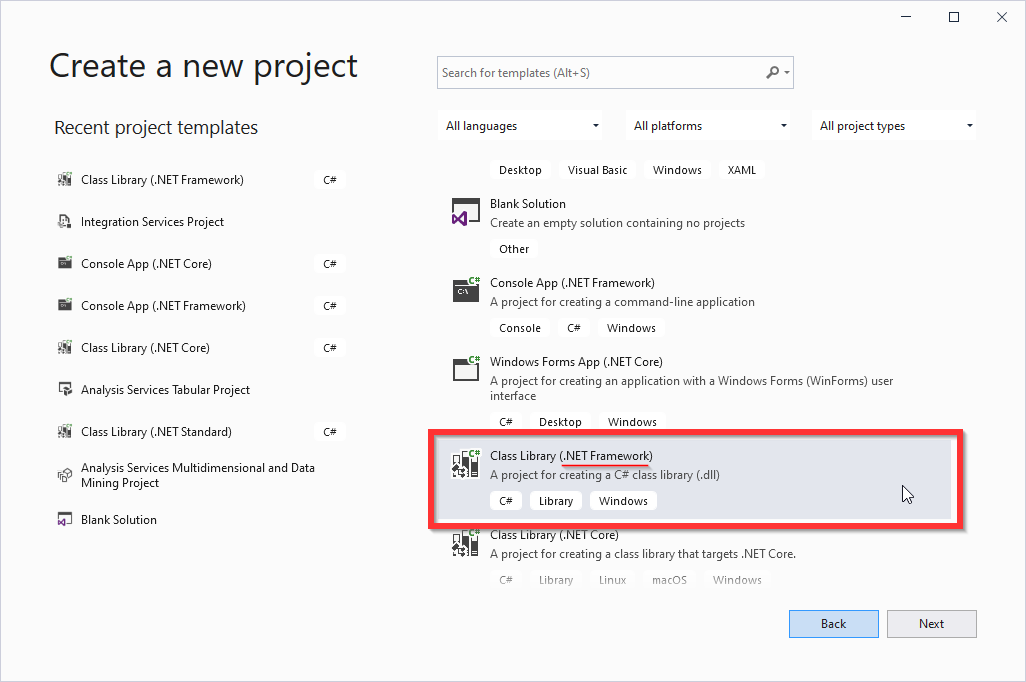 In this article, we will use the .NET framework 4.6 to build our class library, and we will set “SQLExternalFunctions” as a project name. 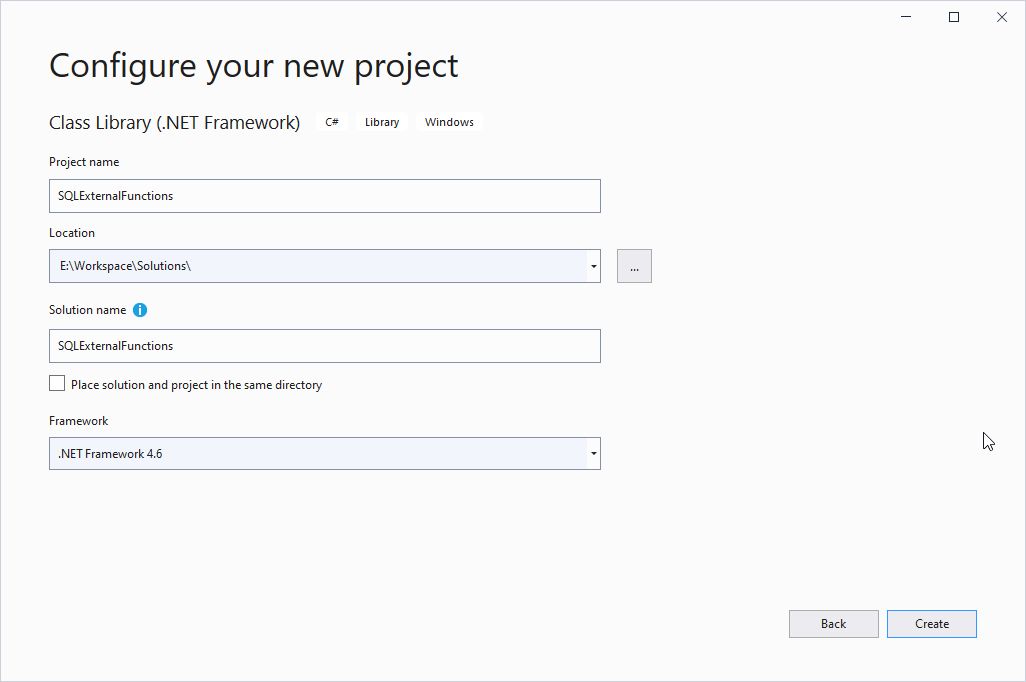 Once the Visual Studio IDE main windows are shown, go to the solution explorer tab to the right and change the name of “Class1.cs” to “SQLExternalFunctions.cs”. 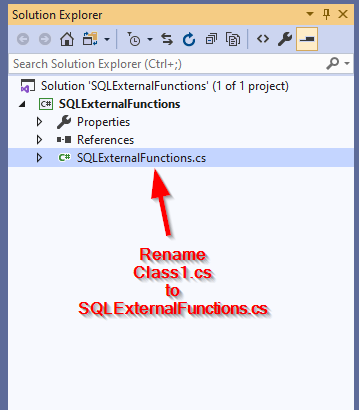 Now, we need to write the functions we need to use in SQL Server. First, let us remove the unnecessary parts of the class. Double-click on SQLExternalFunctions.cs class.

In the C# class editor, remove the SQLExternalFunctions namespace curly brackets and the unnecessary imported libraries (only keep the System and System.Linq) as shown in the image below:

We need to add the static keyword before the class definition since the SQL Server CLR functions must be defined within a static class.

After removing unnecessary parts, we are going to add three functions as follows:

Get current date in ISO format:

After writing the function, we should add some metadata to our class to let the SQL Server know it contains CLR functions. This metadata is what we call in C# “attributes”. If interested, you can learn more about C# attributes in the following official documentation: Attributes (C#) | Microsoft Docs.

Before each function definition, we need to add the following attribute, as shown in the image below:

As mentioned in the Visual Studio tooltip, the SQLFunction attribute “is used to mark a method definition of as user-defined aggregate as a function in SQL Server. The properties on the attribute reflect the physical characteristics used when the type is registered with SQL Server.”

Once done, we should build our class library. To do so, right-click on the project in the solution explorer and press “Build solution”. 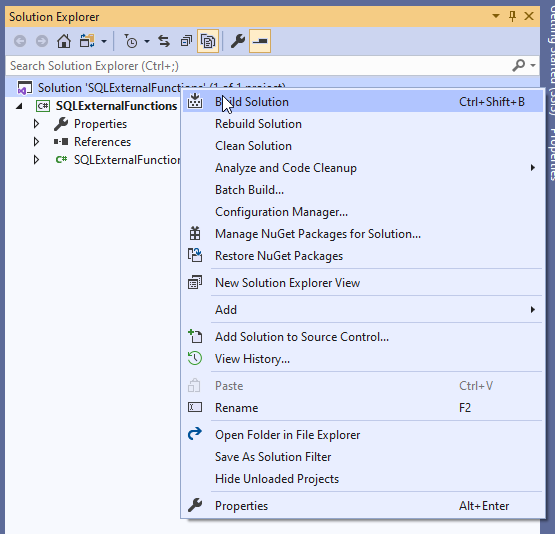 After building the solution, we should copy the created DLL file from the project directory (SQLExternalFunctions\bin\Debug\) to the location where we want to store it (in this article, we will keep it within (D:\CLR Functions\). 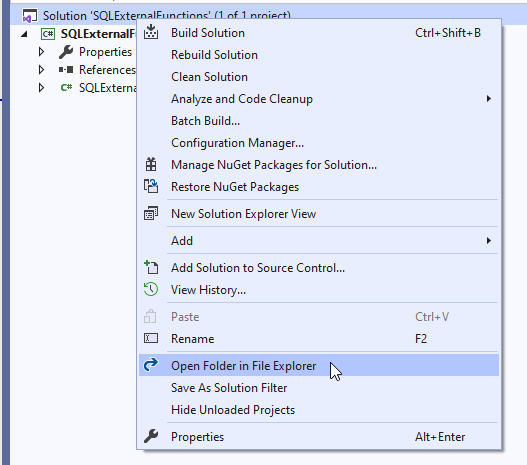 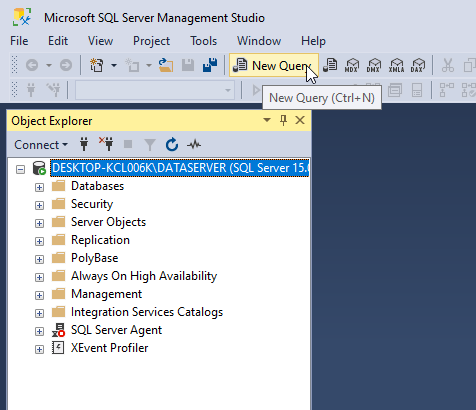 Before defining the SQL Server CLR function, we should configure the Server to allow CLR integration. First, we need to enable the advanced options configuration using the following command:

Next, we should enable the CLR integration option using the following command:

Since this article does not focus on CLR security, we will disable the strict CLR integration security rules already set by SQL Server using the following command:

To map a CLR class library or application, we should create an assembly object within the SQL Server and map it to the class library file path as follows:

For each .NET function, we defined in the C# class library, we should define a related SQL Server CLR function where we must specify the same input parameters and output data type. Besides, we should mention the original function name as follows:

In this article, we should define the following functions:

Now, let us try the following queries to test our created functions:

The image below shows the results of the query execution.

In this article, we briefly explained the .NET common language runtime (CLR) and how to create user-defined SQL Server CLR functions based on a C# class library developed with a .NET framework.

Another option to create and deploy SQL Server CLR functions is by defining them within the SQL Server database project, where they will be created during the database deployment operation.