In this article, I am going to cover in detail working with databases in Python using Pandas and SQLAlchemy. This is a part of the series Learn Pandas in Python where I talk about the various techniques to work with the Pandas module in Python.

In my previous article in the series, I have explained how to create an engine using the SQLAlchemy module and how to connect to databases in Python while using the Pandas module. You can use any database to connect to starting from MySQL, SQL Server, PostgreSQL, SQLite, etc. However, for the sake of the tutorials, I will proceed by using PostgreSQL. Further, I have also explained in detail how to create a Pandas dataframe in Python and insert data from the dataframe into a table in a PostgreSQL database. This involved the use of the “to_sql()” method of the dataframe object to interact with the database. We have also learned about the various arguments that can be accepted by this method and what those arguments are meant for.

This is the easiest way to create a dataframe from a SQL table. In this, we have just provided the two mandatory arguments which tell the Pandas to connect to the specific table with the connection engine. If you want to learn more about how we created the engine, I suggest you have a quick look into my previous article on the same topic. There, I have explained in detail how to create the SQLAlchemy engine to connect to the database.

Further, we can just print the top 5 lines from the dataset that we imported by using the “head()” method of the pandas dataframe. 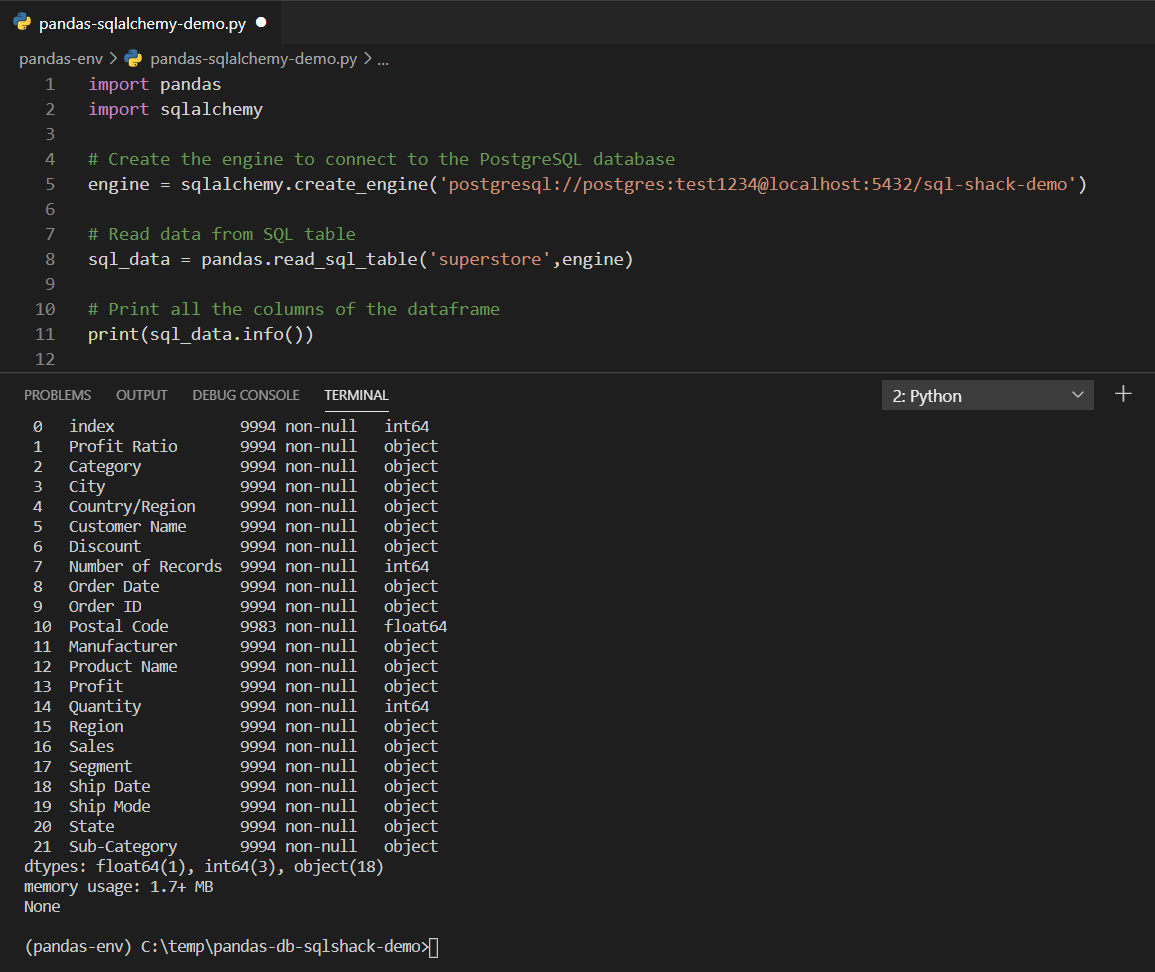 As you can see in the image above, the list of all the columns available in the dataset is listed along with the datatypes. All the strings are represented as “object” datatype in the console whereas the integer and decimal fields are represented as “int64” and “float64” respectively.

Moving forward, let us try to understand what are the other parameters that can be provided while calling the “read_sql_table()” method from the Pandas dataframe.

Let us now modify our previous script and pass all the parameters that we just discussed. 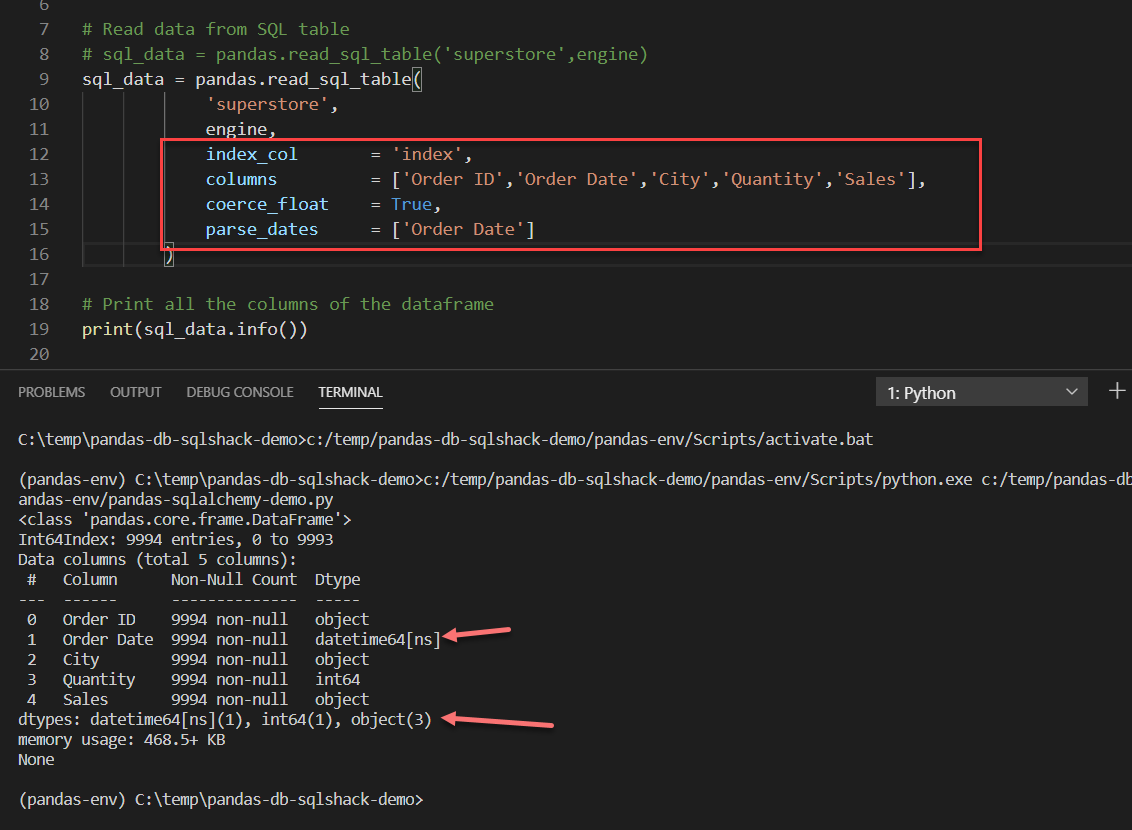 As you can see in the figure above, we have added the optional parameters to select a few columns and also provided the date column that should be parsed as a date. If you look at the console below the datatypes are now clearly displayed for the dates as opposed to the one in Figure – 2.

Running SQL queries to read data from databases in Python

In addition to what we have already seen so far, there is also an option to write simple SQL queries and execute those against a table in the SQL database. This can be done with the help of the “read_sql()” method that is available in the Pandas dataframe object. This method is useful when you want to have more control over the data that you want to bring into the Python environment. You can also join multiple tables in the SQL statement and filter the query buy adding where clause on it. The final result will thus be executed on the table and data will be fetched into the Python environment.

Let us now see this in action. 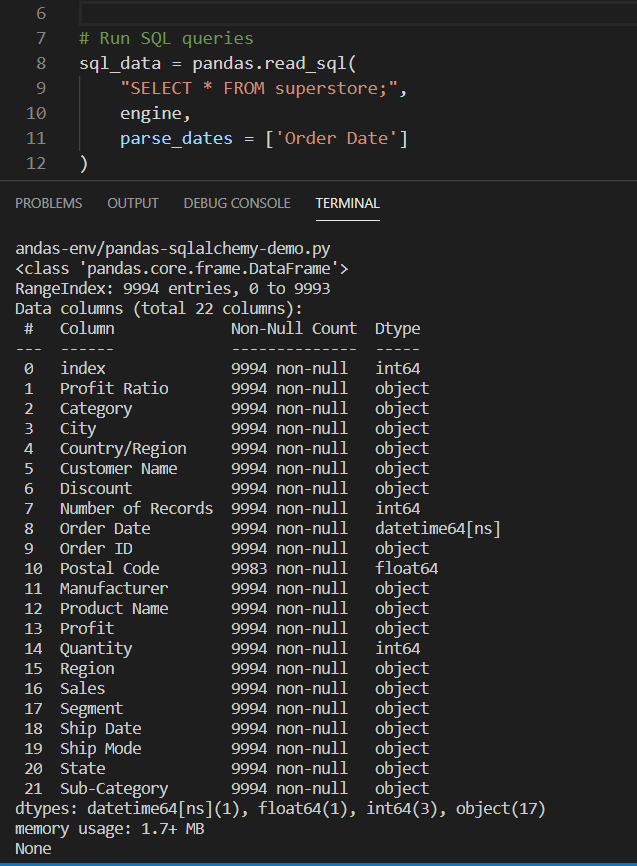 As you can see in the figure above, I have used the method “read_sql()” available in the Pandas object to read data from the SQL table by running a simple SQL script. You can also design your scripts by writing complex queries such as join conditions between multiple tables or running sub queries etc.

In this article, we have seen how to work with databases in Python using the Pandas and SQLAlchemy module. The Pandas is a popular data analysis module that helps users to deal with structured data with simple commands. Using the Pandas dataframe, you can load data from CSV files or any database into the Python code and then perform operations on it. Finally, once your analysis is completed, you can also write the data back to the table in the database or generate a flat file to store the data. The connection to the databases is made with the help of the SQLAlchemy plugin which helps us to connect to databases in Python while working with the Pandas module.