This article is focussed on clever database object naming from both development and SQL unit testing point of view.

This article also highlights the importance of naming database objects going through different development transitions including the SQL unit testing phase due to the agile nature of requirements.

The purpose is to understand the long term positive effect of clever naming of your database object right from the beginning and most importantly during the SQL unit testing when you are up against not so fixed business requirements.

Let us first talk about naming database objects in general.

What about naming a database object

If we look at both typical and special database development scenarios it seems it does not even matter how we name the object.

The truth is, it matters a lot as you proceed further and this is what I am going to explain in this article in the context of SQL unit testing.

The time you think of the potential object (in test-driven database development) or the actual object (in conventional database development) to be created based on business or internal requirements you must think of naming the object cleverly because the database object is going to be referenced throughout its lifetime by that name unless refactoring requirement to rename the object arrives.

Please remember that I am coining a new term SQL Unit Testing Object to be interchangeably used with database object where by SQL unit testing object I particularly mean the database object which must be unit tested to validate it is functioning properly.

How you should name the object

The sixth point in the above list is the most important point.

Let us understand database object naming in the form of two scenarios where each scenario represents a business requirement that keeps on changing with time.

There are some pre-requisites before we proceed further to understanding database object naming from development and SQL unit testing perspective.

This article assumes that the readers are well familiar with T-SQL scripting and tSQLt which is a very well-known database unit testing framework for SQL Server.

This article also assumes that a sample database named Toyshop has been created with the following tables:

Please use the following script to setup the sample database Toyshop: 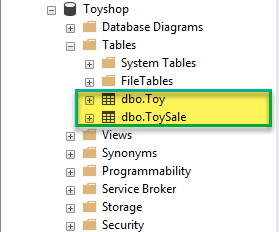 You need to install tSQLt unit testing framework in order to follow the examples in this article. You can check

Please refer to Conventional SQL Unit Testing with tSQLt in Simple Words article for a better understanding on how to install tSQLt framework if you have not installed it before. 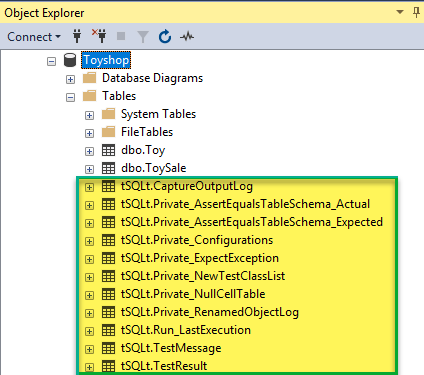 We are using conventional SQL unit testing in this article in order to focus entirely on the objectives (naming SQL unit testing object rather than choosing the best unit testing methodology) although I strongly recommend test-driven database development (TDDD).

The first case is when you receive the business requirement for the first time.

“The end user should be able to see a sales report for all the toys with their names which have been sold.”

This is the time when you have to cleverly choose the name of the database or SQL unit testing object.

Hold on! Before choosing the name of SQL unit testing object do you really need to decide the type of object?

For example, is the potential object going to be SQL function or SQL stored procedure?

The key is to forget the type first and simply name your SQL unit testing object to denote its purpose only which must not give clue to its type.

We are naming the object as ToySalesReport due to the following reasons:

Let us follow the principle of least privilege here in the context of choosing the type of SQL unit testing object. This means to think and ask do you really need a stored procedure here or not? The answer is No.

A stored procedure is not required because this requirement can be easily fulfilled by a simple SQL view.

The object has been created so we are going to create a SQL unit test next.

In order to write tSQLt unit tests, we have to create a test class first.

Once the test class is created, the next step in SQL unit testing from tSQLt framework perspective is to create a unit test to check if the object is functioning properly (in conventional SQL unit testing).

Run the tSQLt unit test to see the results:

The SQL unit test has passed.

Think of this SQL unit testing example from clever naming of potential object point of view as well.

Things are going to be clearer as we move on to the next scenario.

As you know that SQL unit test written in tSQLt in the previous scenario has passed which ensures that ToySalesReport object meets the business requirement.

“The end user should be able to see a sales report for all the toys with their names for a specified year which have been sold.”

This is how clever naming of the SQL unit testing object (ToySalesReport) helps because we are not going to introduce a new object with another name to meet new business requirements rather we are going to keep the same object.

We are simply going to convert the SQL view into a SQL stored procedure so that the required sales data for a specified year can be displayed as per business requirements.

Please write and run the following script to update ToySalesReport object to meet the changes in the business requirement:

We are updating SQL unit test to meet year based reporting requirement as follows:

We need to run the updated SQL unit test:

I strongly recommend the beginners and database professionals who would like to proceed further with SQL unit testing using tSQLt to go through the following articles:

You can also refer to the below articles, written by my fellow author, Esat Erkec: