This is a conceptual article consisting of two parts with enough supported material for any data professional or enthusiast with databases or data warehouse development background willing to go a step ahead by using an industry-recognized SQL unit testing framework called tSQLt.

This article also highlights the importance of a not so well known innovative development strategy called Proof of Concept used by specialists (including programmers) to test a new idea or concept by developing the model rather than the actual solution.

Additionally, the readers of this article are going to get familiar with the method of mapping existing database development practices to a basic data warehouse business intelligence solution using tSQLt.

The Concept (Proof of Concept)

Let us begin our journey with the concept or the proof of concept.

What is proof of concept

A proof of concept is like a pilot project, which is all about developing (testing) an idea or concept to check its feasibility or potential to use it as a base to begin actual work if all goes well.

One of the most interesting examples of proof of concept is a concept car that is specifically designed to test new technology or design, which may or may not become part of commercial manufacturing to be available for the general public.

In the software world, proof of concept is whether the new idea of developing your software is workable or not.

There are a number of ways called strategies that can be used as a basis to develop or test the proof of concept. Let us have a look at a few of them.

This strategy is based on reverse engineering of an existing process to improve it further.

This is the strategy used in most common scenarios where the developers map the existing process to a newly proposed process in proof of concept.

Another good example of mapping strategy is in the context of Data Warehouse business intelligence solutions when business requirements are mapped to data models, which are then exposed to internal and external business users to be used for analysis and reporting.

An interesting point to note is that we are using a highly productive and commercially in use SQL unit testing framework tSQLt to work on our conceptual model, thereby leaving enough room for implementation, as mentioned in the introductory passage of this article.

Let us now focus on the test-driven data warehouse development with tSQLt proof of concept by first designing a toolkit also serving as pre-requisites.

The following are required to work on test-driven data warehouse development using tSQLt proof of concept:

They can also be represented by ETL workflows where E stands for extract(s), and TL stands for Transform-Load(s).

If you would like to know more staging extracts, please refer to SQL Unit Testing Data Warehouse Extracts with tSQLt.

In simple words, a typical data warehouse environment from the data point of view mainly consists of two phases: 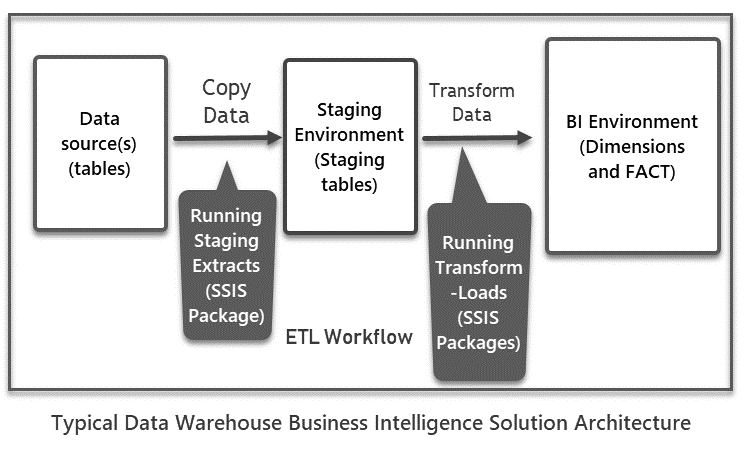 A polite reminder for the beginners to please at this point not to confuse ETL (Extract Transform Load) with ELT (Extract Load Transform) since they are both data movement strategies, and both can work equally with data warehouse solution.

Set up a sandbox (environment)

The first thing in order to start working on the proof of concept is to set up your sandbox environment, which is going to serve as your mini-research lab.

We need to set up a sample database called SQLDevArticlesV5 which is going to serve as a source by running the following T-SQL script against any dev environment:

Set up a sample data warehouse

Add tSQLt to the source database and data warehouse

The next thing is to download and install the tSQLt (SQL unit testing framework) for both source and data warehouse databases from the tsqlt.org.

Please follow the instructions in the article Conventional SQL Unit Testing with tSQLt in Simple Words to install tSQLt if you have not installed it before.

The following output upon running the tSQLt.class.sql script indicates that tSQLt has been installed successfully onto your desired database(s): 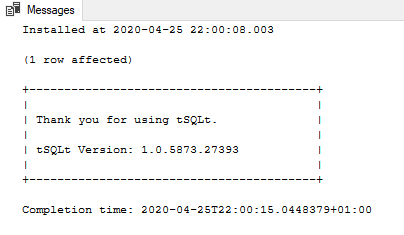 The sandbox environment to begin the proof of concept with tSQLt is ready to be used if all the above requirements are met.

The requirements from the business point of view can be as follows:

As a business user, I would like to view strictly tested authors report preferably from a system optimized for reporting and analysis so that further reports can be added to it

Your business analyst receives the requirements and modifies them for you as follows:

The clients are in need of a data warehouse which must be thoroughly tested to be eventually used for multiple reports and analysis beginning with authors report.

You have had a quick chat with your team and come up with a plan as follows: 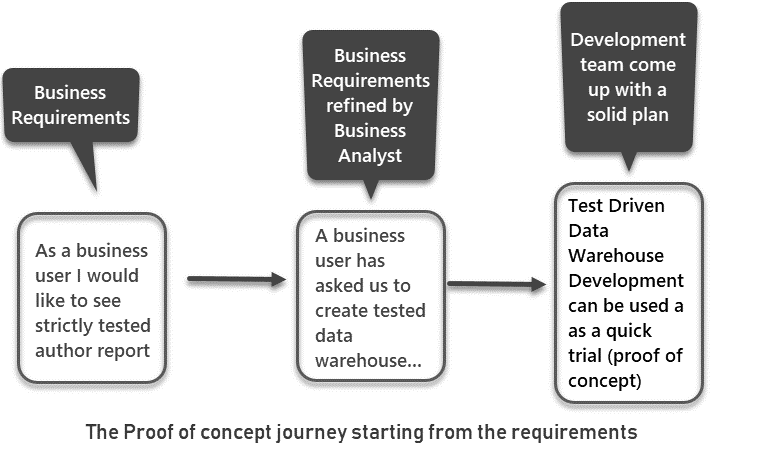 At this point, if you are not already familiar with, then please review the test-driven database development concept by going through the article Fundamentals of Test-Driven Database Development (TDDD) with tSQLt unit testing.

However, the data warehouse is a bit more complex as compared to a database where we can start with a potential object by creating a SQL unit test to check its functionality, which has to meet the specification, and this effort ultimately helps us to build the requirement specific object without over-engineering.

Yes, we can think of an object called AuthorsReport as in the case of test-driven database development, but then how does it fit in a data warehouse scenario and establishing the proof of concept is the most important question to move forward.

Create the first SQL unit test for the data warehouse database SQLDevArticlesV5DW to check if an object exists as follows:

As per test-driven database development principles that test must fail since the object is not yet created as follows:

Now we are going to create the desired object in the same data warehouse database SQLDevArticlesV5DW so the basic test to check its presence must pass:

The test output should be as follows:

So far, so good, the proof of concept with tSQLt is on the run, but it is a slightly long way before we see it working more robustly.

Congratulations, you have just gone through the halfway, and things seem to be fine, but please be prepared to do some serious work in the next part of this article to get the things on track since this trial must show that it is worth the effort. Stay tuned