This article also encourages both beginners and professionals to standardize their SQL database unit testing with tSQLt because of its native compatibility (being written in SQL) and immense flexibility regardless of the database development tool in use.

If you are a stranger to tSQLt then your database development and testing journey have probably not begun yet but if you are an experienced database developer and never had an opportunity to come across tSQLt then perhaps getting tSQLt in your squad of tools could change the way you think you can test objects.

The top three less discussed features are as follows:

You can easily install tSQLt by simply running SQL script against your database.

You can straight away use tSQLt (once installed) to write unit tests just like the way you write and run SQL stored procedures.

It can very easily be reset or uninstalled and this is very handy when your development database needs to be deployed to the next target environment whether it be QA/Production without the (unit) testing code.

To learn more about tSQLt please go through the following articles:

However, not many database enthusiasts are aware of the fact that you can also run unit tests against your database using the same Azure Data Studio (you used to create your database) with ease provided you do have some background knowledge and skills to do so.

That’s what we are going to learn in this article.

Please try to draw a picture in your mind (and then on a piece of paper) about how to achieve all this before we actually, go through the steps as it is always good to compare your proposed idea with the actual solution.

To fully understand the article by implementing the examples, the readers are assumed to be familiar with the following things:

In order to achieve our objective (to be able to successfully write and run unit tests against a database) we are considering the following planned steps:

Let us start by opening the Azure Data Studio: 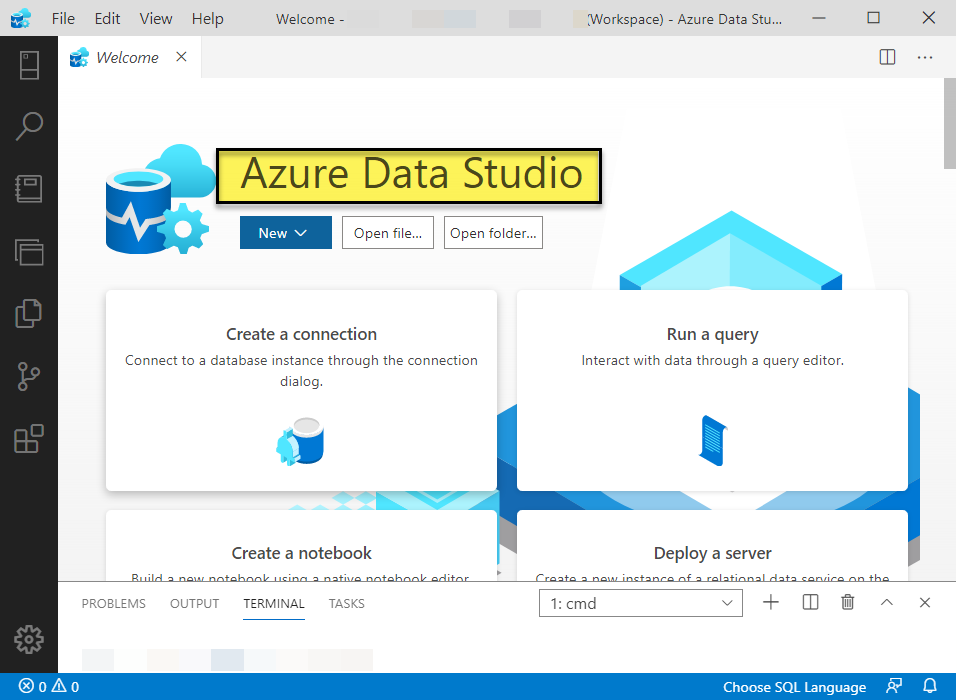 Please ensure that you have the latest updates installed and the tool has no known issues at the time of using it.

Connecting to the SQL instance

The next step after you have opened the Azure Data Studio is to connect to your locally or remotely installed SQL server instance. Please click on the Connections section of the sidebar to open it:

Next click on the installed SQL server instance to connect to it: 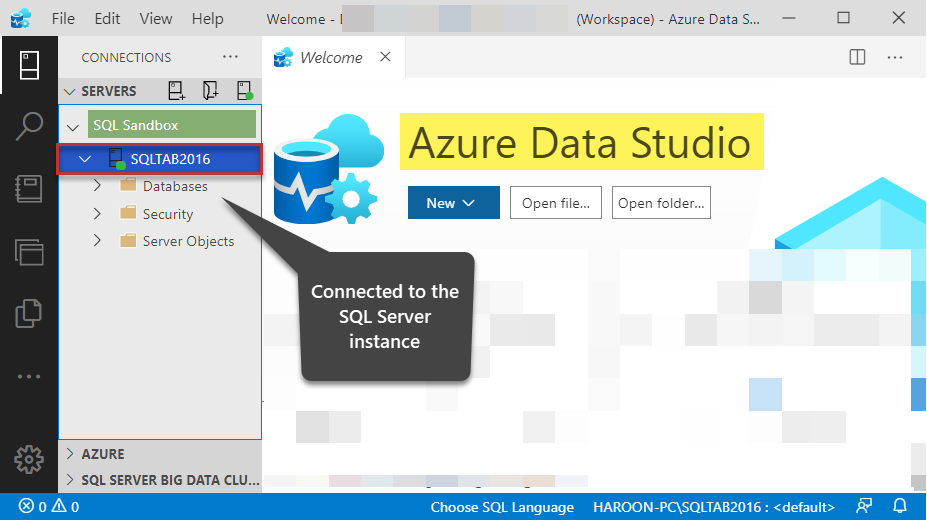 A green light next to your SQL instance name indicates that you are successfully connected now. 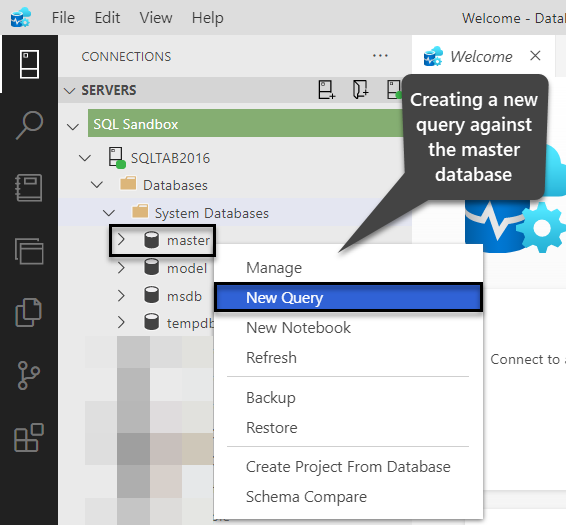 Please create a database called SampleLaptops with a table Laptop by writing the following code:

Press F5 to execute the code. Refresh the Databases node to view the recently created database:

Once the database is successfully created the next step is to install the tSQLt framework. Please download the latest version of tSQLt and then open tSQLt.class.sql after unzipping the folder.

Run the script (tSQLt.class.sql) against the sample database:

A successful tSQLt installation is shown above. 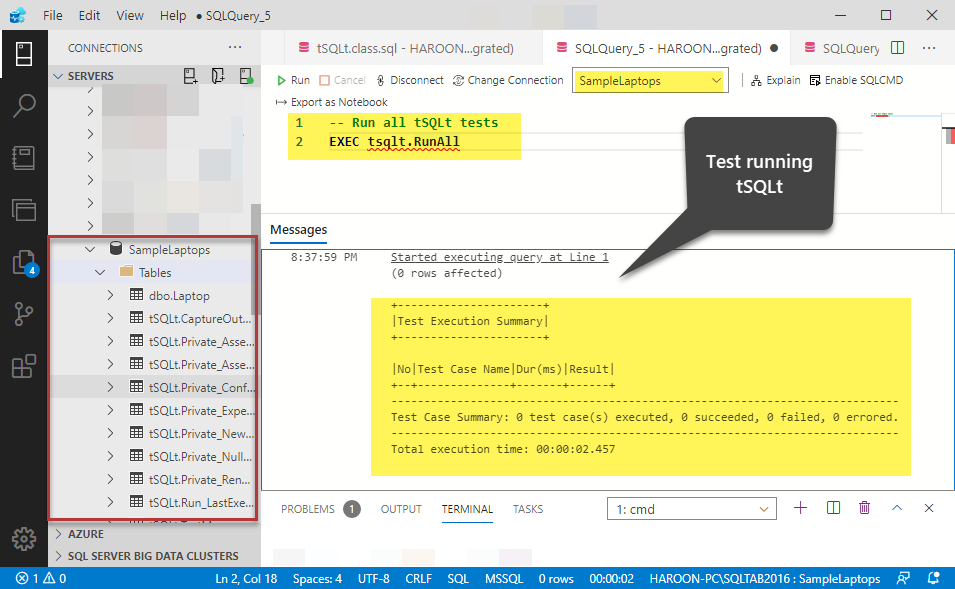 Obviously, you have not written any tests yet so you would not expect any tests but this successful dry run proves that tSQLt is all well and ready to be used.

Creating a SQL database object without any functioning

Let us create a stored procedure AddLaptop without any code for the time being with the help of the following script:

The stored procedure does run but is not doing the job it is intended to do.

Creating a unit test for the object

Create a unit test class first by running the following script (against the sample database) as a first step to start unit testing your database:

Create a unit test (in the form of a stored procedure) as follows: 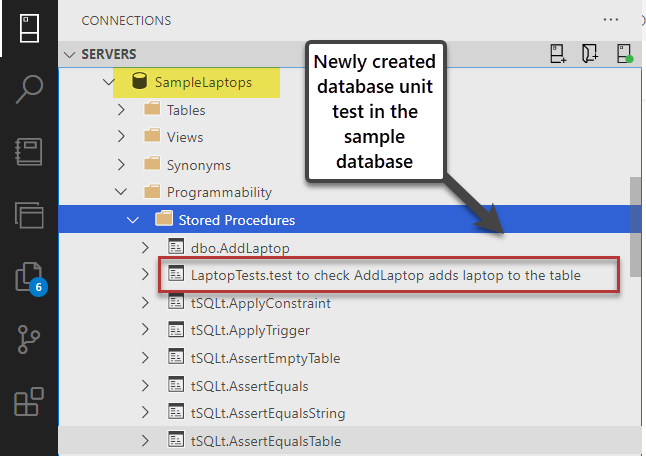 Running the unit test object to see it getting failed

It is time to run the SQL unit test which is expected to fail because we have not yet modified the object (stored procedure) to be able to perform the required job of adding a laptop table. Let’s run the tests:

Now we need to modify the stored procedure to add the desired functionality to it:

Execute the script to see the following output:

We have modified the stored procedure to add the required code so that it should be able to add new laptop records in the table now.

However, the best way to check (whether the procedure works fine or not) is to run the unit test and see if it gets passed or failed:

The results are as follows:

You can clean the database if you are done with all the tests which is a safe practice before deploying your database to the target environments.

However, please remember cleaning the database will uninstall tSQLt and remove all your unit tests from the database so you must put your database unit tests under source control to be retrieved as when required.

As this is a demo database you can also clean it to rerun the examples as many times as you like because the more you practice these examples the more you are going to be confident.

So, if you are happy to reset the database by removing the tSQLt framework and the unit tests you created then run the following command:

Congratulations, you have just learned to write and run unit tests against a SQL database in Azure Data Studio along with resetting the database by removing tSQLt files along with any unit tests created.