In this article, we will focus on a test-first approach to build simple SQL database hotfixes provided they are T-SQL compliant and have no other dependencies.

This article also highlights the importance of creating SQL unit test using tSQLt for the purpose of hotfix testing.

It is a test first approach to build and test simple SQL database hotfixes before they get deployed to run in Production environments.

It is a method of developing a simple database hotfix by testing it first.

It is a simple SQL hotfix development strategy where testing the hotfix helps in building it successfully.

At first glance, if you are not familiar with test-driven database development it apparently makes no sense that how a test can help us to build something.

However, the truth is that the SQL unit test is shaping your logic to build that object in the test-driven database paradigm (model) thereby encouraging you to keep on modifying your object until the test which satisfies the requirements starts giving you the green signal.

The only difference in the case of test-driven database hotfix development is that the database object in this particular case is a script or even a procedure that is solely responsible to fix a database related performance, consistency or business (requirements) issue. 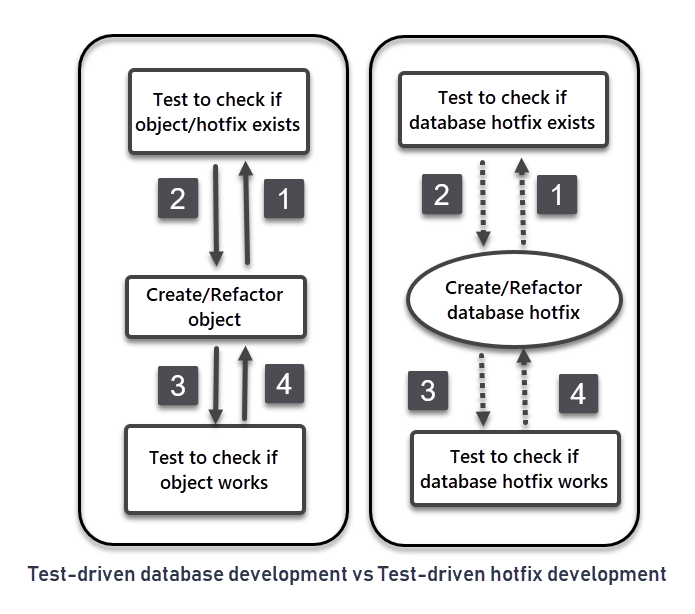 Let us now implement this approach based on a real-time scenario where you have been instructed by the business to apply a database hotfix.

However, before you make a start you must have a database which is an essential element in understanding the whole scenario.

Set up a sample database (SQLDevArticlesTDHD)

View articles before the hotfix

We can quickly take a look at the only table of the database before we receive business requirements to apply a database fix as follows:

Please assume the following hotfix is desired by the business:

The Title column of the table Article must mention the name of the author in the following format:

This hotfix looks like a piece of cake if we have a handful of records but what if there are thousands and thousands of records and applying the hotfix incorrectly or partially is not going to help.

So, you are tasked with the development of a hotfix which is ultimately going to change the live data correctly and completely.

A safe approach to solve this problem is to use test-driven database hotfix development.

So, please install the tSQLt framework to your development database if you wish to follow the walkthrough. You have to either download tSQLt.class.sql file from tsqlt.org or install it by running the script against SQLDevArticlesTDHD in the file below:

A successful tSQLt installation is shown below: 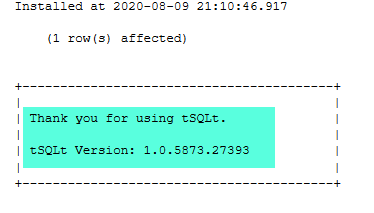 The next thing right after you have received the hotfix instructions and installed tSQLt is to think of a potential object which serves the purpose which is the ultimate hotfix.

This is the easiest part of test-driven database hotfix development as you are only required to just think of it and name your hotfix object.

Let us call it TitleWithAuthorHotFix.

Create a test to check if (hotfix) object exists

As per test-driven database development rules, the first thing is to create a SQL unit test to check if the hotfix object (TitleWithAuthorHotfix) exists.

Run SQL unit test to see if the object exists

Please run the SQL unit test so that we are sure at this point the object does not exist as we expect this test to fail:

Now work needs to be done to ensure this test passes in order to move on, so we have to create the hotfix object still at this point we are not concerned about the functioning of the object.

The hotfix as an object can be created as a blank stored procedure as follows:

Rerun SQL unit test to see if the object exists

Let us now rerun the unit tests after we created hotfix object stub (without any code):

Create a test to check if hotfix works

Next, we need to create another SQL unit test to check if the hotfix (represented as) object functions properly as now we know the object (TitleWithAuthorHotfix) is there:

Now run the tests to see the results:

The results are as follows:

The hotfix stub object needs to be refactored (modified) to ensure that it serves the purpose and that is the most important part of test-driven database hotfix development where you author (design) the logic of the hotfix and incorporate it into the object keeping in the mind the test which validates this logic:

Let us refactor the hotfix object as follows:

Congratulations! Both SQL unit tests have been passed now and you can now hand it over to your testing team for further tests since it is to be applied to Production database(s).

We have now reached the end of this article but before that let us see the hotfix in action.

Apply the hotfix against the sample database

Let us apply a hotfix to our sample (development) database:

View authors after applying the hotfix

Please check the Article table to see the results after hotfix has been applied:

The results clearly show that the hotfix has been applied successfully to the sample database.

However, in professional life scenarios, there may be a number of other steps and teams involved after that which ensure that the hotfix is good enough to serve the purpose but it cannot be easily challenged from the development logic point of view once it is successfully built using test-driven database hotfix development.

Once you are familiar with both database hotfix development approaches then making a choice between them is purely based on what is best-suited to your (business) requirements and what you are best at.

Test-driven database hotfix development has an edge over traditional SQL unit testing due to the fact that it is strictly test-driven so your test coverage is going to be just what is required rather than piling up bulk of non-essential SQL unit tests which must be maintained as well.

Therefore, you can save a lot of extra effort using test-driven database hotfix development but then on the other side, you have to go through a tough exercise of refactoring your tests until the condition (business requirement) is met. If you are willing to do that (and it is worth doing it) then test-driven database hotfix development is for you.