This article talks about getting your database hotfixes tested with tSQLt provided they do not have any inherited complexities or dependencies on things other than SQL database.

In this article, I am going to walk you through the steps of creating and running tests to check a hotfix before it is actually run against the database.

Additionally, the readers are going to get a conceptual understanding of database hotfixes alongside knowing the flexibility of our chosen SQL unit testing framework for simple hotfix testing.

The understanding of database hotfixes may vary from scenario to scenario, but that does not stop us from defining a database hotfix, which (definition) can be generally accepted.

What is a hotfix

A hotfix is generally a change to be applied to the Production system often without bringing it offline and with very little disruption to the existing system.

What is a database hotfix

A database hotfix is generally applied to Production database(s) in order to fix an existing or potential issue related to consistency, integrity, or performance of data.

However, under exceptional circumstances, a database hotfix can be applied to the databases other than Production, such as QA or even HOTFIX (database).

How is a database hotfix applied

A database hotfix can be applied in many ways, including the following:

However, before we apply the hotfix, it must be tested, and if it is a simple SQL database hotfix, then tSQLt is the best candidate for testing it.

When is a database hotfix desired

We may need a hotfix for a database in a number of scenarios, including the following:

A database hotfix testing lifecycle can be as simple as follows: 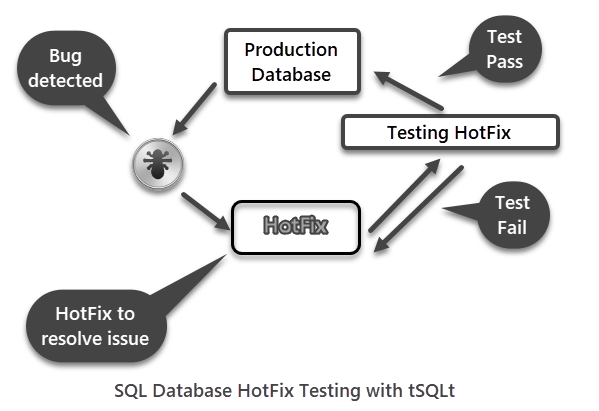 However, this may get pretty complicated when you have multiple versions and multiple environments of your database, but let us keep our focus on getting hands-on testing hotfix with before it gets deployed to Production or any other desired environment.

Please remember the sample database in this article represents a development database, and it is not at all recommended to install tSQLt into your Production or QA database(s).

Set up a sample database

We can create a sample database named SQLDevArticlesFixes by running the following T-SQL code against the master database:

Let us have a quick look at the Authors table by running the following simple query:

Please keep in mind (or you may refer to it later on) the last record where the registration date is 01 Jan 2019.

In order to create and run SQL unit tests against your development database, please download the tSQLt.class.sql file from tsqlt.org and run it against SQLDevArticlesFixes.

A successful installation must be showing the output similar to the one below: 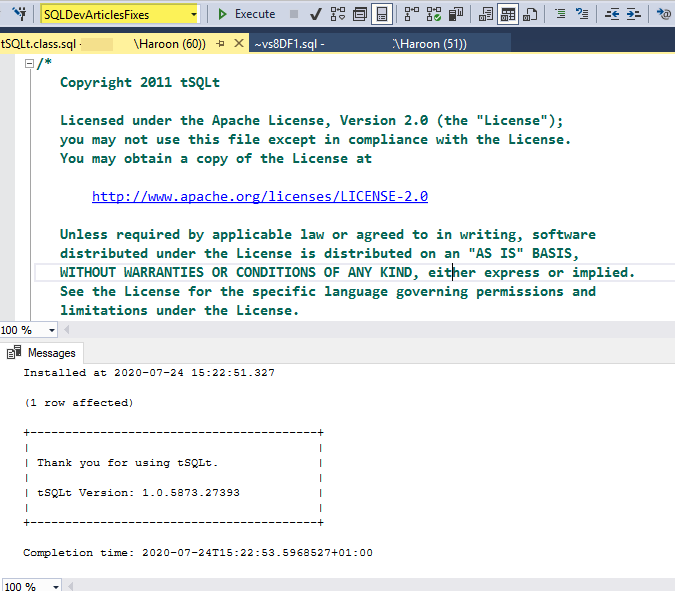 Please refer to the article, Conventional SQL Unit Testing with tSQLt in Simple Words to get more information about tSQLt installation if you are still having any issue.

If your output is the same as above (with the exception of date and time), then you are good to go as we have not yet written any SQL unit test, but we can see tSQLt has been successfully setup.

We can now create and run SQL unit tests against our sample database; however, we need some solid requirements before we start our work.

Let us suppose we have just been informed about the following business requirements:

The infrastructure team decides to apply this change as a hotfix, but they have asked the development team to create this hotfix so that they can apply it in the Production environment.

Creating an object for the hotfix

The development team decides to create a stored procedure to apply this hotfix, which is going to change all the registration dates from 01 January to 02 January, where the registration year is either 2019 or 2020.

We can call this Jan01ToJan02HotFix so let us create its stored procedure as follows:

Creating a test class for the hotfix

Now that we have created an object which applies the hotfix, we must not let it go without testing it, and that is the reason we set up tSQLt. Let us create a test class for hotfixes as follows:

The hotfix test should be based on the following things:

Create SQL unit test for the hotfix by running the following T-SQL script:

We can run all the SQL unit tests now:

The results can be seen below: 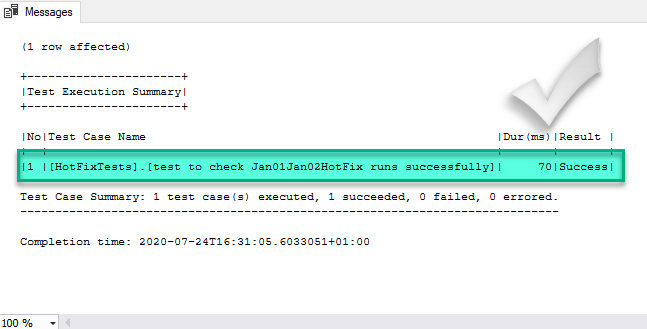 Please feel free to run this hotfix against the sample database to see it in action:

It is time to view the Author table after we have applied the hotfix:

Congratulations, you have successfully tested a hotfix with one of the most advanced SQL unit testing frameworks, followed by applying it to the sample database.

It is easy to say that tSQLt cannot only help in database object unit testing, but it can also play a vital role in SQL based simple hotfix testing, plus all of these hotfixes can be grouped into a separate test class for future reference and (re)use.

However, this approach is suitable only for simple SQL based hotfixes, as discussed in this article. As for more complicated ones, you have to work with other tools, technologies, and team(s) to test them properly.