This article is an overview of tSQLt, which is one of the best SQL unit testing frameworks, due to number of reasons, including the ease of writing unit tests in the same language (T-SQL) in which the database objects themselves are written.

Most of this article is knowledge based and has been written keeping in mind the first time tSQLt and SQL unit testing learners.

This article also highlights the very compatible nature of tSQLt with core concepts of SQL unit testing there by making it best fit for the purpose along with the things which are hard to notice in the fast paced SQL unit testing world but serve as driving force to build state of the art database unit tests.

It is very unlikely for an experienced database developer or database tester to be unaware of the core concepts of SQL unit testing, but it is worth reviewing them (if you are already familiar) especially when they are discussed in relation to tSQLt.

What is SQL unit testing?

SQL unit testing as the name suggests is testing individual units of the database by writing unit tests which are also called test cases and tSQLt makes this task easy and instant.

What is a Database Unit?

A database unit is any database object such as view or stored procedure which contributes partially or fully to meet business requirement directly or indirectly and tSQLt is capable of giving full coverage to all the database objects in a database.

When do you Create Database Unit Tests?

Database unit tests are created right from the database development phase alongside creating database objects and tSQLt makes it easy to do that and lets you create these unit tests instantly.

Should you Create Unit Tests Before or After Database Objects?

In conventional database development pattern, you create database objects first and then you write database unit tests for those objects, however, this is not always the case.

You can create database unit tests before or after creating a database object and tSQLt supports both testing patterns (which are discussed in detail in the upcoming articles of this series).

Database Unit Tests are generally run by the development team members who write them in first place followed by test team as a part of manual or automated process during the build and release time while further details of these processes are beyond the scope of this article.

We are purely going to focus on what makes tSQLt one of the best SQL unit testing frameworks.

Let us rebuild tSQLt by putting all its best things together one by one to understand its distinctive features assuming you are tasked to build tSQLt framework.

First, visualise the features in the illustration below: 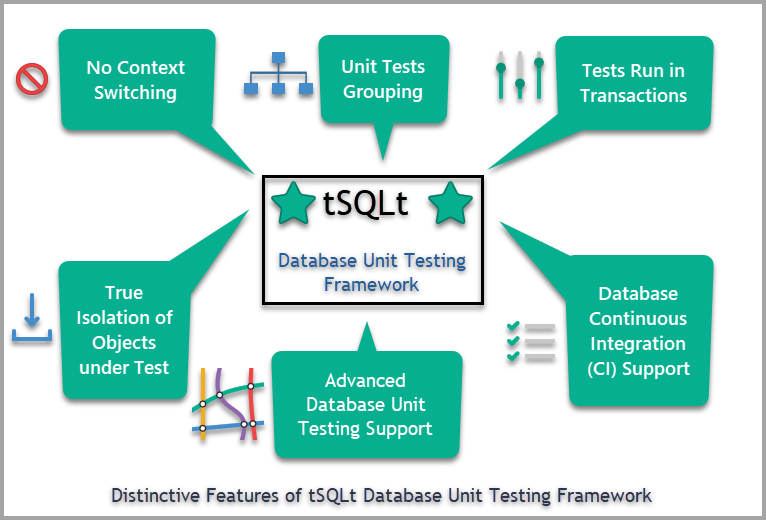 No Context Switching From T-SQL

If you have to build an all-purpose SQL unit testing framework you would like it to be in the same language in which database development is taking place which is T-SQL.

In other words there is no context switching from T-SQL to any other language or tool to write unit tests so it does not require additional learning skills and it is easy and quick to write database unit tests.

Your proposed SQL unit testing framework must be able to arrange unit tests in groups so that you can run unit tests on these groups independently and on demand without needing to run all the unit tests.

tSQLt lets you arrange your unit tests into different groups and then individual group unit tests can be run independently or on demand which is such a relief when it comes to narrowing the scope of unit testing to test particular business requirement.

In case of troubleshooting Authors Report you can only run AuthorsReportTests as a first step to check the unit tests are all fine or not.

True Isolation of Objects under Test

Another important factor in building a unit testing framework is to make sure that it provides isolation of the objects under test which means it should be able to focus on a single database object there by isolating it from any other dependent objects.

Isolating object under test from other dependent objects is very distinctive feature of tSQLt.

This does however require you to write another unit test for LogUser() this time isolating it from AddAuthor().

You would like to see our proposed SQL unit testing framework to run unit tests in transactions so that they can be run in parallel and in a consistent manner.

tSQLt by default supports running unit tests in transactions which also mean no need to clean up test objects afterwards since they are going to be automatically cleaned.

The good news is that tSQLt provides the integration support for Database Continuous Integration and Deployment through DevOps for databases.

In simple words the unit tests written in tSQLt can be fully automated in such a way that any changes to the database deployed to target environment automatically run the associated unit tests.

As you have just become familiar with the special features of tSQLt it is worth to see pricing model and competitors of tSQLt.

The pricing model of tSQLt is cost free model which means it is free to use personally and commercially because tSQLt is an open source project capable of serving the testing needs ranging from individuals to corporates.

Ready for the Contribution / Customisation

Since tSQLt is an open source project, its code is easily available for further contribution or customisation, however, this does require certain level of expertise in this area though.

One would simply argue that what is the point of using tSQLt when third-party unit testing tools are there.

Yes, this is true the database testing tools are available in the market today by famous vendors who have made SQL unit testing very easy and intuitive along with fancy GUI support.

However, do you know that the underlying unit testing framework behind almost all the famous third-party database testing tools is tSQLt.

Yes, all the market leading SQL unit testing tools are based on tSQLt which shows the power, flexibility and coverage of tSQLt.

Philosophy of Creating and Running Unit Tests in tSQLt

A database unit test is based on AAA rule which consists of the following steps:

Let us understand how unit test anatomy revolves around Arrange, Act and Assert with an example:

You are unit testing a SQL view named Authors which shows records of all the authors stored in Author table.

To better understand this let us do some coding and create a very simple Author table as follows:

In the first step we create expected object and populate it with expected value.

In order to unit test Authors view we first need to create an expected table Authors_Expected to hold the expected results:

Next insert one author record into the expected table:

In the next step we have to test run the object under test which is Authors view and put the result into a new Author_Actual table as follows:

In the final stage actual results are compared with expected results and in our case we will compare Author_Actual table with Author_Expected table.

If no records are found that means both expected and actual results match so test has passed.

Keeping this simple example in mind tSQLt lets you apply these concepts with ease and flexibility by hiding complexities and isolating objects under test in such a way that unit testing a database object becomes easy, interesting and flexible.

Congratulations! You have familiarised yourself with some of the core concepts of SQL unit testing along with some key facts of tSQLt which is going to help you in writing database unit tests with tSQLt in the upcoming articles of this series.