Implementing best data warehouse designs and practices such as data lineage reduces the need to ever have to restore an entire relational data warehouse. However, sometimes there are instances whereby you have inherited poorly designed data warehouse environments that leaves you with no other options but to perform an entire database restore in an event of a sudden disaster. I recently found myself in a similar situation of having to recover one of my data mart following a data integrity issue wherein all data of a type 1 dimension was updated/overwritten using an incorrect source file. In this article I take a look at how different approaches can be utilised to restore the compromised SQL Server-based data mart back to its “good state”. 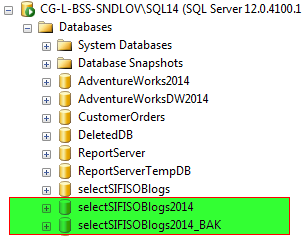 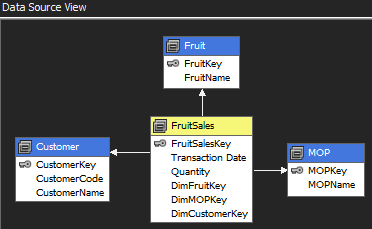 The customer dimension is the compromised object that has recently been updated with an incorrect source. For instance, Figure 3-4 compares the two versions of customer dimension, as it can be seen that whilst the version in the selectSIFISOBlogs2014_BAK contains correct customer name values the version in selectSIFISOBlogs2014 has been updated using method of payment (MOP) source file in such a way that customer name values are now set to either CASH or ELECTRONIC.

The results of Script 1 execution are shown in Figure 5 and they indicate that the fruit dimension in the backup database is missing an entry that contains an apricot fruit.

Not surprisingly, as shown in Figure 6 the results of comparing the FruitSales fact table indicates that the selectSIFISOBlogs2014 database has one more transaction relating to the sale of apricots than its counterpart in the backup database.

Given the discrepancies observed in the two versions of customer dimensions, the simplest way of restoring this dimension to a previous “good state” is by conducting a full database restore of. Figure 7 shows a restore of selectSIFISOBlogs2014 data warehouse environment using the Restore Database wizard in SQL Server Management Studio (SSMS).

Instead of restoring the entire database, we can also just restore only the affected customer dimension which will ensure that we avoid data loss in the fruit dimension and fruit sales fact table. Unlike its counterpart, the partial data restore approach involves several steps: