Whilst discussing the evolution of SQL Server Data Tools in my previous article, I touched on a new feature, Package Parts, which is available in SSDT 2015. This article takes an in-depth analysis of the Package Parts feature, particularly, as it relates to Data Warehouse development.

There are various approaches to designing a reusable SSIS package, for instance, you could create your own package template, implementing parent-child package execution using Execute Package Task, or simply copy and paste an existing package. However, just because your SSIS solution is reusable doesn’t necessarily mean that it’s easily maintainable too. Sometimes as an ETL developer, you need to make changes to your SSIS solution because of structural changes from source, change of connection string etc. and depending on how you have designed your solution, this process of refactoring your ETL could range from bearable to agonising. In the following sections of this article, we discuss and illustrate how Package Parts can be used to create reusable and maintainable SSIS solutions that could later make your ETL refactoring experience, very pleasant.

In order to understand and appreciate the Package Part feature in SSIS 2016, I will demonstrate some of the limitations we encountered in the traditional package template. A package template allowed you to create a package with shared controls that can later be used as a template for creating other packages. Say for instance you have a requirement to setup a data mart that stores fruit-sales data. Such a data mart might contain the following fact and dimensions:

Populating the abovementioned dimensions may involve similar processes (i.e. use Execute SQL Task to clear staging table, generate surrogate keys, send out error emails) in which case creating a package template would be useful. A typical package template that can be used to load the fruit-sales data mart is shown in Figure 1. 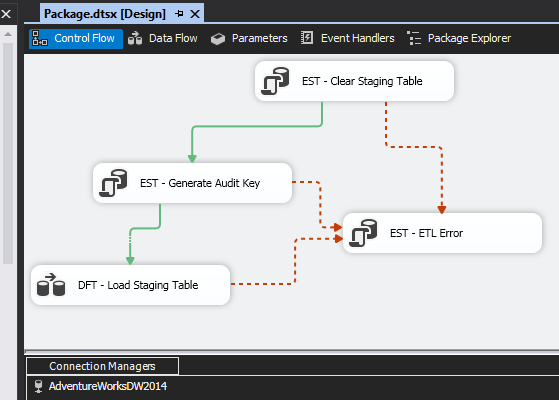 Once you have located the correct drive location, then copy and paste the package template into the folder as shown in Figure 2.

After you have closed and re-launched SSDT, the next time you add a new item into an SSIS project, the package template you added in Figure 2 will come up as one of the template options for your new item as shown in Figure 3. 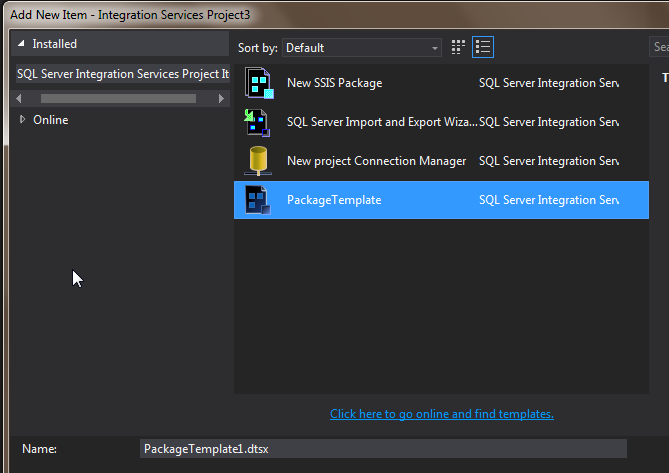 Now that I have a template, we can use it to create the rest of the packages that will load our fact and dimensions for the fruit-sales data mart. The complete ETL for loading our data mart is shown in Figure 4. 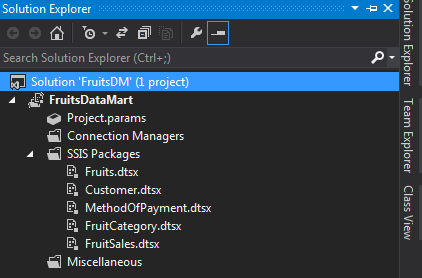 The greatest limitation with the traditional package template comes in when we need to refactor our SSIS solution. Say for instance we later realise that for some reasons our staging database has been changed from AdvetureWorks2014 to ReportServer. Well, to ensure that any packages created using the template has the correct database reference, we will update our package template such that the OLE DB connection shows the correct database as shown in Figure 5. 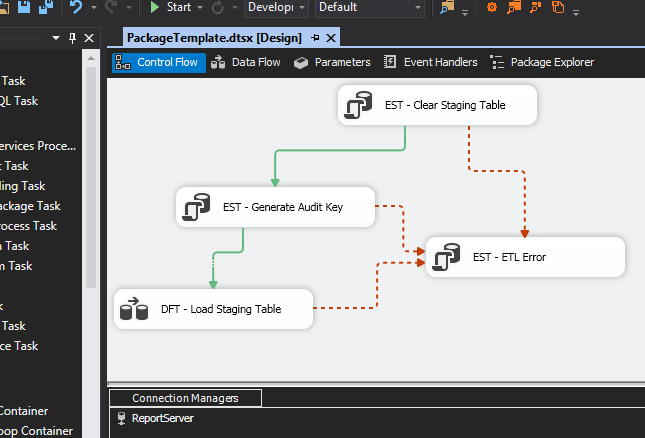 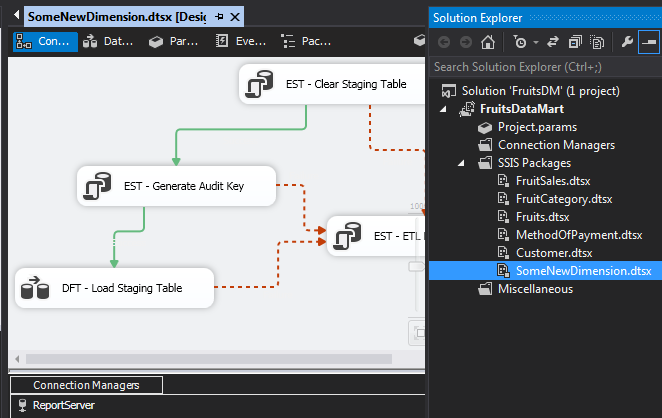 But, what happens to packages created with an older version of the template? Will they still have references to the old connection? The answer is, unfortunately, yes – as shown in Figure 7. 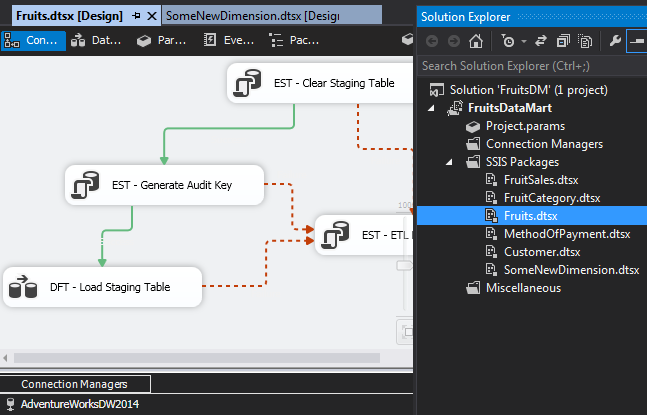 This means that in order to ensure that the old packages have the correct connection, we will have to open each individual package and update the connection (that’s where the pain comes in, as in a case of a solution with 100 packages would mean opening and editing each package). Another alternative would be to delete all old packages and recreate them using the new template – either way, you will have to manually work on those 100 packages!

Package Parts enable us to produce package templates that are easier to manage and reuse. As from SSDT 2015, every SSIS project has a new Package Parts node, which in turn, has a Control Flow sub-node, as shown in Figure 8. 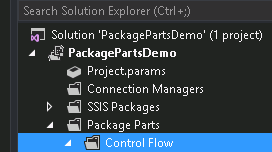 It is in this Control Flow sub-node that we get to create Package Parts by either adding an existing file-based Package Part or simply create one from scratch, as per options shown in Figure 9.

Working on Package Parts is similar to the way you work on SSIS Packages except that Package Parts have their own file extension, dtsxp. In Figure 10, we have created a Package Part that mirrors the traditional package template that was created earlier on. 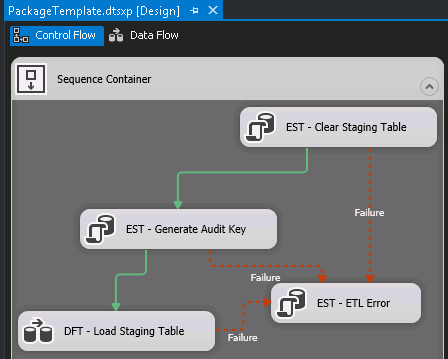 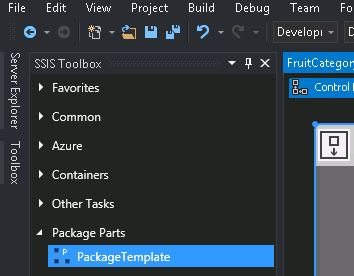 Figure 12 shows an SSIS Package that uses a Package Part. As it can be seen, Package Part’s component have a letter P on the right hand corner of that component’s name. 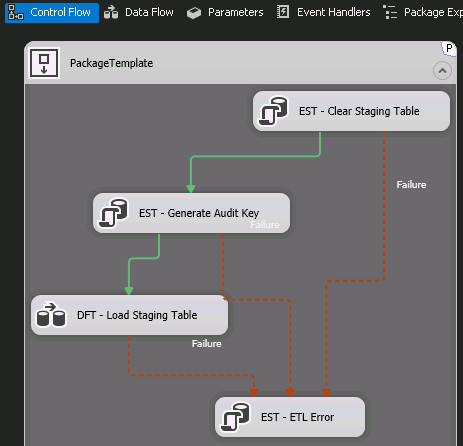 Once the connection name of PackageTemplate.dtsxp is changed to ReportServer, we can see that such a change has been applied on SSIS Packages referencing the Package Part as shown in Figure 14.

I can almost hear what you are thinking, “So Microsoft, why allow me to create such a Package Part with multiple executables outside the Sequence Container, if you are going to prevent me from using it?” Personally, I think this is a bug!

The rest of the limitations of Package Parts include the following:

Package Parts introduces another alternative to creating reusable and maintainable SSIS solutions. Unfortunately, it has its own sets of shortcomings which I hope will be resolved in subsequent releases of SQL Server.